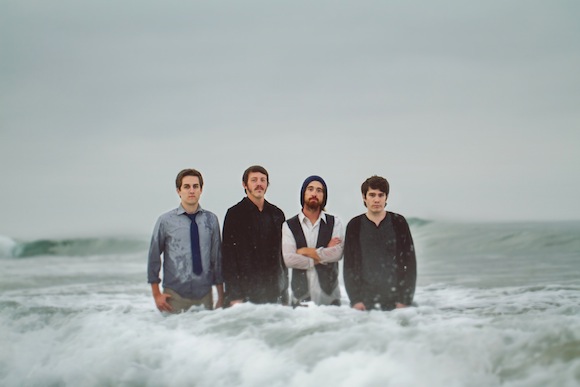 I can almost guarantee that none of you will know my name, so let me begin by introducing myself. My name is Brian and I play guitar in a band called Culprit, based in the greater Los Angeles area. If you had walked up to me one year ago and told me that I’d be playing in a touring band in southern California, I wouldn’t have believed you. My life has been completely redrawn in the past twelve months. It’s as if I had taken an etch-a-sketch and created a work of art – and then violently shook it empty – only to carefully engrave something that truly pleased my eye. I’m originally an “east coast kid,” born in New Jersey and then raised in the Keystone State.

Like many, I learned to play guitar in high school, and had my share of embarrassing local bands. College life soon crept up on me, and hindered my addiction to playing guitar. Dorm life made it difficult to practice, and homework every night made it even harder. One night at 5 AM, in the midst of a snowstorm at this upstate New York school, I called my dad and told him I had realized my dream. I wasn’t referring to the kind of dream you have at night. I confessed that it was my deepest desire to wake up in a van, playing a new city every night on tour. I could hear the skepticism through the phone, but he knew I meant it, and he supported me anyway.

A few months later, in early January of last year, I packed up my things and left college for a ton of small reasons that anyone over 30 might raise their brow at. After moving back home to Pennsylvania, miserable but feeling free, I put up an optimistic post on absolutepunk.net. Basically, I stated I was a dedicated guitarist who was looking for a local touring band to play in, and I posted a song I had wrote and recorded to go along with it. I had a few nibbles in the first week from bands, but none of them were really what I was looking for, and weren’t as dedicated as I wanted to be.

I woke up one day in February and checked my e-mail to find a message from a guy named Nate. We volleyed some e-mails and eventually some phone calls, and before I knew it I was invited to audition for this great sounding band that he manages. Only problem was that it was far from local. Jobless, unproductive, and still a fresh college dropout, I said “why not” and withdrew my last $400.00 from my bank account and bought a plane ticket. I flew across the country for four days in March of 2011 with my backpack full of clothes and the only electric guitar I owned in my hand. I got to know the guys in Culprit somewhat well.

Another month slipped by, and I was getting anxious. I had gone over the idea of playing in a touring band in California at least a thousand times by now, but I was becoming nervous that they didn’t like me enough to play for them. In the middle of April, I got the phone call that would change my life. Badly in need of some kind of direction, I weighed out the pros and cons with my friends and family, and then humbly accepted.

After a summer of working 45 hour weeks and buying a car, along with the essential new gear I would need to do this right, my “move date” came. On September 1st, I embarked on a cross country drive with a good friend in my passenger seat. We wove our way through thousands of miles of empty plains and national parks until eventually reaching Los Angeles. It’s honestly been the most thrilling year of my life. After getting up to speed on the songs, everything smoothed out. I played my first show with Culprit at The Viper Room in Hollywood, we went on a southwest US tour with Happy Body Slow Brain and The Paper Melody for three weeks in November, headlined The Roxy last month, and we even just finished recording a couple of songs that I’ve contributed a lot of my own songwriting on.

Life has been anything but easy since joining Culprit. Going from the free living of my parents house to living on my own in the real world, supporting myself in an expensive metropolitan area, 3,000 miles from everything I know has been rough, to say the least. But this love for playing music just seems to hop the hurdles I am facing and has kept me happy all of this time. If there’s any sort of food for thought I’d like you to gain from reading this, it would be how important it is to try and realize your dreams and pursue them. Stop making excuses. You aren’t too old, you aren’t too young, you aren’t too busy already, you aren’t tied down by your significant other, you aren’t your parents puppet, and you certainly aren’t incapable of achieving what you want. Sometimes, a leap of faith is just what we need. If you just close your eyes and take that giant step out over the ledge of the unknown, even knowing that you may fall, you might find that when you put your momentum into something, it just might catch you on the other side.