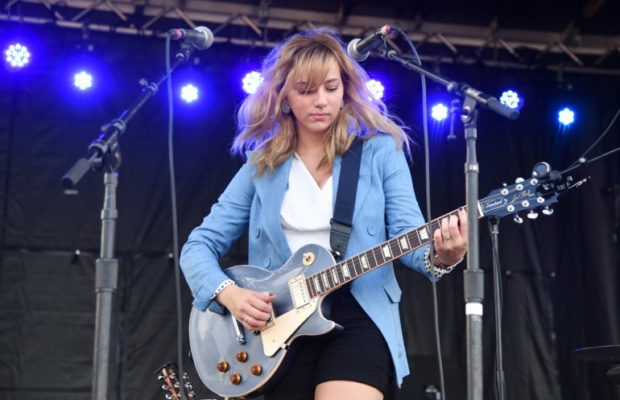 I wandered into my last day of Austin City Limits with more confidence than I had the past two days. I was also a little more upset, a little disappointed the current state of the system. So I thought it was appropriate to see a group of Austin punk rockers as soon as I made it into the building. I’ve been dying to check out Sailor Poon ever since hearing their song “Leather Daddy” back in 2016. This female-centric feminist punk band  is just the coolest bunch of people. They’re Sonic Youth, now on Blu-Ray with fewer men and more style. You can’t get any cooler than lead vocalist/saxophonist Billie Buck, wearing a gold jumpsuit, screaming “It’s hard to be a woman” (a song written by her mother, who was in audience), and not giving a shit as her lipstick smeared. The band clashed behind her in away that only truly skilled musicians can. Even though I risk sounding like a forward weirdo, I just want to be friends with every member of Sailor Poon.

While I did not plan on my morning being so punk, Sailor Poon and the next band, shame, were what I really needed. One of the best things about music festivals is being surrounded by, you guessed it, music. Everywhere you turn, there’s something different and new to listen to. They’re the perfect grounds to not only see acts you already love but also discover new bands. The band shame (stylized in lowercase letters) was probably my biggest discovery of the festival. I decided to the check out the British post-punk band on a whim. They performed on the Honda Civic stage, not too far from my next interview, and I had time to kill. Similar to Greta Van Fleet, who I saw on my first day of ACL, shame is a young band emulating a style of yesteryear. As the world falls apart, it’s only appropriate that punk comes in vogue again. I believe shame will be the band to bring that genre back to life. This was the band’s first Austin City Limits, and unfortunately for those attending week two, they’re not on the line-up.

The band’s rebellion on stage seemed to come from a genuine place. I don’t know if it was a response state of the system in both America and the U.K (I overheard CHVCHES complaining about Brexit on Saturday night) or the blistering noon heat of Austin, but the band performed excited and angry in true punk fashion. Speaking of fashion and anger, vocalist Charlie Steen wore a long sleeve t-shirt with “Not Angry” scrawled in sharpie. He tossed off the shirt at some point. His face was drenched in sweat as his bandmates played steady but powerful beats behind his rambling lyrics. It was awesome and genuine.

I feel like I can sum up Janelle Monáe’s performance in two words: “Pussy Pants.” That’s actually all I’ve said whenever anyone asks me how the performance was. Once the phrase “Pussy Pants” leaves my lips they’re already fanning themselves. For those of you who don’t know, I’m referring to the iconic look from the music video for Monáe’s summer bop “Pink”. Seeing Monàe perform in the hot Texas sun at 5pm really highlights how much of a goddess she really is. With outfit changes and background dancers she really pulled out all the stops for Austin City Limits. Supporting her album with the “Dirty Computer Tour,” Monàe played a good mixture of her old music and songs off the latest album. In these difficult times, Monàe took a few moments to speak about love and positiveness. The openly pansexual artist allowed the crowd to take time and love one another, but more importantly love ourselves. With the protest lurking just beyond the bubble of the Austin City Limits festival, there was a few minutes of hope.

After a day full of interviews I decided to check out one of the artist I had the pleasure of speaking to, Hailey Knox. One of the youngest people playing the festival, Knox was not to be missed. She opened up her set with her latest single “Bitch, Bitch, Bitch,” which premiered just two days before her ACL performance, and captivated the crowd. The New York native pulled in a sizable crowd at her 6pm time slot on BMI stage. She adorably let the crowd know about her loop petal love (which she also mentioned to me during our interview) as she created a quick beat to perform over. My favorite song she performed was the romantic longing song “Don’t Got One,” which is the perfect introduction to honest gen Z romance that I’m excited to hear from Knox’s generation. Hailey Knox was not out of place at this line-up, with one EP under her belt and a few singles, she can hold her own and I could see her taking a bigger stage in the future.

I was homesick, sunburned, and tired of eating festival food, but overall my Austin City Limits experience was wonderful.  I was a rookie to the festival, but by the end of day three I felt like an expert. I can’t wait to do it again next year.