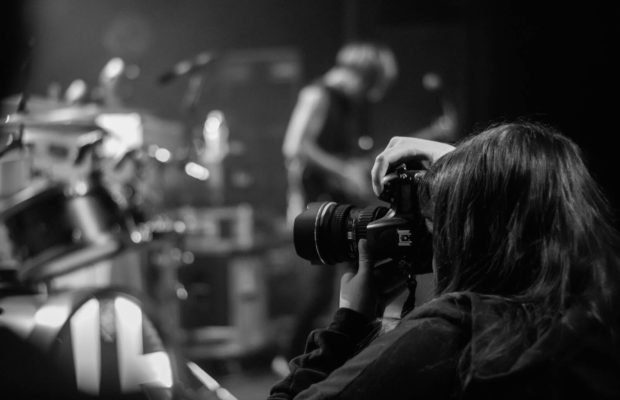 Hailing from New Jersey, Alyson Coletta has built a hefty, and very impressive, portfolio over the years of some of your favorite artists including The 1975, Carly Rae Jepsen, The Early November and more. Spending the entire summer out on Vans Warped Tour with Epitaph Records, Alyson opened up about her start in the industry and why it is important for beginning photographers to never let anyone discourage their progress.

I always was really into photography. My parents had a Polaroid 600 camera back when I was little and I was obsessed with using it. They eventually had to restrict me to how many pictures I was allowed to take because of how fast I would go through the film. I was not thrilled about that. As I got older, I came across someone online when I was 12 who did concert photography and for some reason, it just stuck with me. People always ask me why I chose concert photography, but I honestly have no idea. It has just always made sense to me.

I was self-taught. I took a photography class in the first semester of my junior year of college, but the professor didn’t teach us much besides the basic/traditional “rules of photography.” I also ended up teaching him how to use Lightroom.

A lot of young photographers have a mind set of “more expensive equipment, better photos”, do you agree with this idea?

Yes and no. If you learn how to use your gear, you can take decent photos no matter what. However, whoever tells you that gear doesn’t play any part in improving your work is a liar. I used an entry-level DSLR up until last March when I ordered my D750. The D750 has way better image quality and it can handle noise at high ISO. I shoot mainly metal/rock/hardcore/etc. music and the lighting isn’t always great for those genres – especially if it’s a smaller band in a small venue.

On my first DSLR, I used to not be able to get usable images past ISO 1,250. I ended up with super noisy photos and/or dark photos as a result despite shooting with an f/1.8 lens. Now, with my D750, I can shoot at ISO 5,000 and still have clean images. It’s improved my work tremendously and made my life much easier. Better gear does help improve your work, but it can only do so much. You still have to know what you’re doing and know how to post-process images.

My first show was Vans Warped Tour in 2012 at the PNC Bank Arts Center in Holmdel, NJ. I photographed The Used, Anti-Flag, Taking Back Sunday, Miss May I, Chelsea Grin, Of Mice & Men, Mayday Parade, and a bunch of others that day.

Yes; definitely. I mainly only photograph bands I actually enjoy listening to, but lately I’ve been trying to branch out and cover artists I normally wouldn’t cover. It’s good to branch out of your comfort zone sometimes because you can discover really great new artists that way.

I Killed The Prom Queen

My cheesy motto is “shoot wide ‘til I die.” 99% of my images are with my Tokina 16-28mm f/2.8. Sometimes I change it up depending on the situation, but it’s rare that I ever actually take the 16-28mm off my camera body. As for my editing style, I don’t know how to really describe how I edit. Recently, I tend to favor high contrasted images. Sometimes I like to edit photos to give them a “shot on film” look. I just try out different things on photos and see what fits the image best.

The photo I’m most proud of is a photo I took of The Used in April of 2015. Everyone who likes music has a favorite band/artist. The Used happens to be mine. I’ve been seeing them in concert since 2007, so I learned a lot of things they do on stage at each so. The past few years, Bert (the vocalist) has been spitting water into the air during their song “Take it Away.” I was determined to get a really cool shot of it, and since I have seen them so many times, I knew the exact moment he was going to do it. I made sure to scout out a spot during the opening bands to make sure I found the perfect angle to take it. I timed it just right and it was the exact shot I hoped it would be. The band loved it so that made it a lot more meaningful. When bands like your work, it means a lot. You do your best to represent them in the best way, so when they compliment your work, you know you’re doing your job well.

The amount of photographers has grown a lot, but it doesn’t really bother me. I used to worry about what other people were doing with their work and how fast they were accomplishing their goals, but I don’t worry anymore. Focusing on other people prevents you from progressing. Be proud of your friends in the music photography world; because accomplishing goals they set in their dream career is amazing. Don’t get bummed out if they are progressing with their career faster than you are. Help your friends become successful. Build each other up. Help out the new kids in the game. They may be able to help you out when you need it later on.

Be patient. There are a lot of people reaching for the same thing you are, so it may take longer than you would hope to reach your end goal. I’ve wanted to give up many times, but I had a lot of friends who yelled at me to keep going, and I’m glad they told me to.

Don’t let someone belittle you if you photograph a show for free. There are people – mainly the older scene – who like to belittle new photographers for photographing shows for free. You have to start somewhere. I wouldn’t expect anyone to pay for a service that someone has no prior experience in. So if you come across those people, ignore them. I highly doubt they got paid the minute they picked up a camera. Eventually, once you develop experience and skill, you can start charging some money for your work.

For All Those Sleeping

Check out the first part of our interview with Alyson Colettta in our exclusive Warped Tour issue here.

Portrait of Alyson by Kyle Kojack