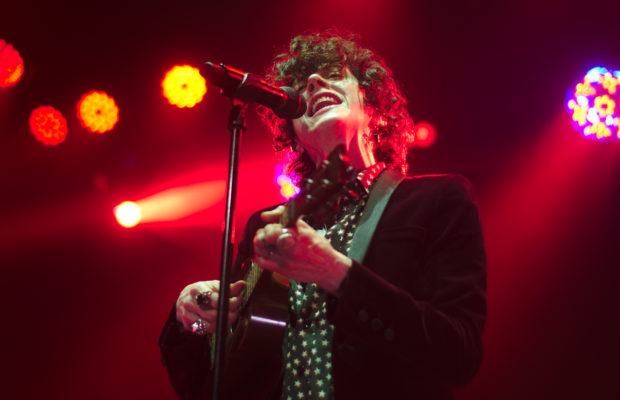 One of the most controversial films of this years Oscars was Bohemian Rhapsody, a biopic about one of the most beloved bands of our time Queen, but mostly their one of a kind iconic lead vocalist Freddie Mercury. I could go on about all the problems with the film, but I should leave that for another article. Actor Remi Malek who won an Oscar for the performance plays Freddie Mercury and he does a really great job in the otherwise lackluster film. Why am I bringing this up? Because watching artist LP on the stage all I could think about what, “This is Freddie Mercury.” I don’t work in Hollywood, I barely in the music industry, but if I had the power she’d been cast hands down.

LP who has been in the industry for years is magical. The sold-out White Oaks Music Hall show in Houston, Texas was one of the exciting things I’ve been able to witness. On her Heart to Mouth tour in LP was joined by a lovely husband and wife acoustic act Jim and Sam. Jim and Sam opened to a restless, but respectful crowd. The chill married couple, based out of Los Angeles (although vocalist Sam is from Texas, so points to her) was delightful on stage with cute banter and stories about their relationship. They gave lots of insight into who they were and what inspired their songs. One song in particular “Holy Water” was a good tune about coming from different backgrounds. Something nice about Jim and Alex was their natural chemistry (you can’t fake love like that).

After Jim and Sam, it was time for the lady of the hour to take the stage. I had talked to many of LP before the show. One woman told me she had been waiting five years to see her and had taken the whole day off of work. A fellow photographer recalled seeing her perform a smaller venue in Austin years ago and he was excited to see what she was going to do with this sold-out show. LP’s music speaks to a wide variety of people. The venue was filled with rocking her bright merch, making wonder if the kids had cool parents or the parents had cool kids, either way, good for them! She opened to applauds and cheering from the crowd as she sang “Dreamcatcher”. She worked through every song from her latest album Heart to Mouth, which the tour was supporting. She’s captivating to watch perform live with high energy a not breaking a sweat. A signature sneer comes across her face as she really gets into her music. It’s full of passion as she sings. In her set list was a cover of “Sex on Fire” by Kings of Leon, which is a song that I personally hate, but when LP is performing it’s the greatest song I’ve ever heard. There’s no time for cute banter in her performance only music and only energy. LP is next level. The only way anyone should ever experience her is in a sold-out show because she deserves every performance to be sold out. The closest thing to Freddie Mercury we currently have a woman from New York that goes by LP and sings poppy hooks with emotions that I didn’t even know I could feel.