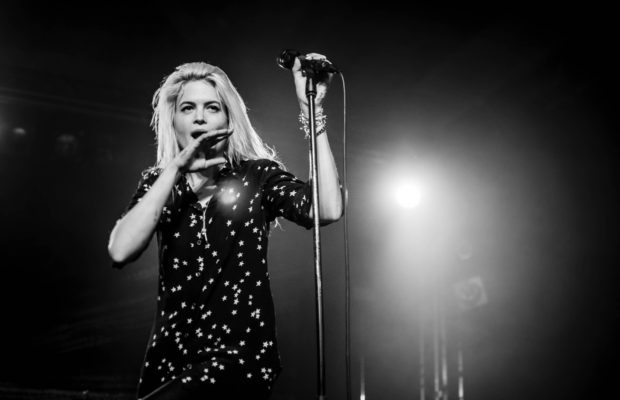 Check out the photo gallery from this show here.

With the release of their new album, Ash & Ice, The Kills arrived in Seattle this past week with brand new music and a brand new vibe. Playing to a full house at Seattle’s Showbox Sodo, the crowd was in for a treat with a jam packed eighteen song setlist.

Opening up the night with “No Wow”, the title track of their second studio album, and following with “U.R.A Fever” and “Heart Is a Beating Drum”, it was evident Alison Mosshart and Jamie Hince were determined to give a show everyone would remember, pleasing fans with both old favorites and new tunes.

“Kissy Kissy”, played fourth in the set, had Mosshart and Hince singing the lyrics to each other, showing the strong artistic bond they have between each other and within their musical project as The Kills. With heavy guitar notes ringing out of the speakers as the two of them sang “it’s been a long time coming” on a loop, the performance was a testament to the work and career both Mosshart and Hince have put into The Kills, especially as they prepared for the release of their new album, Ash & Ice, that dropped less than forty-eight hours after the end of this Seattle gig.

“Black Balloon”, played halfway through the night, was a highlight of the performance and caused the crowd to be the most interactive yet. Immediately breaking into applause as soon as the first notes hit, everyone raised their hands in the air and clapped along to the distinct beat that is played throughout the song.

While Mosshart and Hince didn’t talk much during the night, wanting to dedicate as much time as possible to their music, they used moments during the songs to interact with fans. During “Baby Says”, both Mosshart and Hince pointed out those who were singing along with them, smiling and exerting feelings of appreciation throughout the entire song.

The Kills are a group that everyone needs to see live to understand what kind of musical act they are. Jamie Hince’s artistry is in its strongest form while onstage, not missing a single note on his guitar the entire night.

For Mosshart, her stage presence is unlike anything else in rock music. With vocals that are raw and have their own tones of imperfection, her carefree and unsugarcoated persona onstage, that includes spitting wherever she pleases and thrashing her hair from side to side, makes her incredibly captivating to watch.

With Ash & Ice out now and a slew of tour dates scheduled around the world, including Australia and Europe, that take them well into the end of the year, their Seattle show is proof that Alison Mosshart and Jamie Hince have perfected their live performance since joining in 2000, making them a rock act that should be on everyone’s list to see.

Photo and review by Rachael Dowd