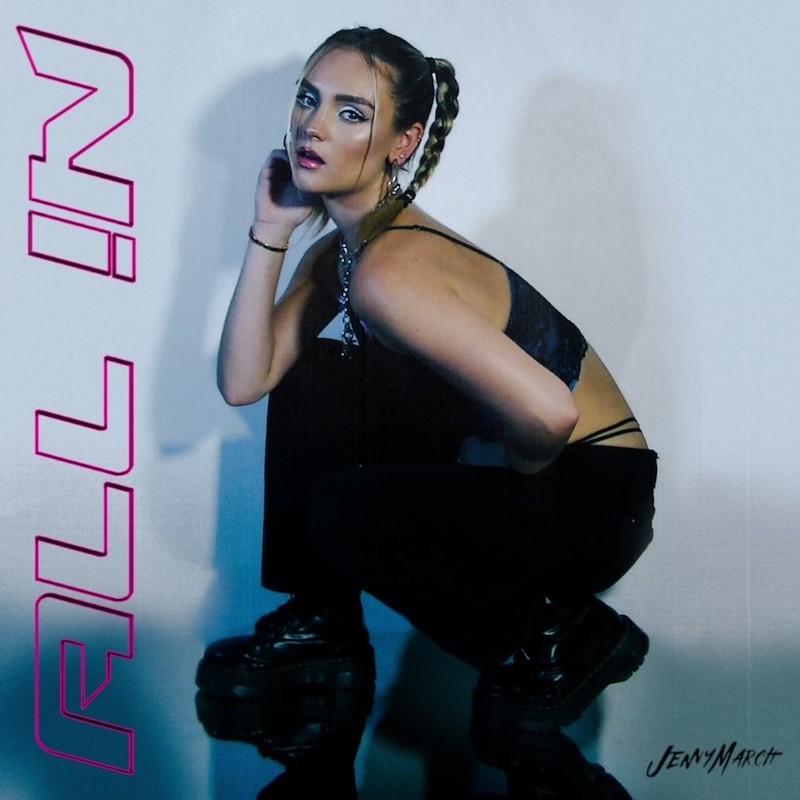 Rising singer/songwriter Jenny March recently released her stunning 90s inspired official music video for “All In,” the second single off her forthcoming 2021 EP, about meeting someone and the instantaneous connection that forms between you.  Growing up a 90s baby, the aesthetic for the single and visuals for “All In” are an homage to the music, fashion, and style of the decade.  Written about that ride or die love of your life, “All In” encompasses that power couple type of romance that makes you feel like you can conquer the world together.  No obstacle stands in your way because you know you have each other and you are “all in.”

“My single “All In” was inspired by the first time I met my boyfriend and the adventures we would go on and things that he did that caught my attention,” says March.  “We had this instant connection that I knew I couldn’t look past.  When creating the video for the track, I pulled inspiration from videos of the late 90s and early 2000s, which I have always been obsessed with since growing up.  You see fish eye lens shots, low angles, pops of colors, and of course, 90s “Robot” back up dancers.”

“All In” follows moody and fierce lead single/video “November Nights” about how you can love someone so deeply, even knowing you probably shouldn’t be with this person, and yet you are still somehow addicted to making it work, longing for their love and validation.  In addition to her weekly Instagram live show “Wednesday Sessions” where Jenny chats and performs with a different artist, Jenny is now a social ambassador for Rihanna’s SAVAGExFENTY line, fusing her love of music and fashion.  Earning notoriety for a consistent string of certified bops, Jenny March creates pop music that’s as intimate as it is intoxicating while proudly upending and undoing expectations all-around.  Her songs embody pure pop bliss with hashtaggable lyrics that make you feel like you’re talking to your best friend or reading someone else’s DMs.  Simply put, the Ohio-born, Los Angeles-based songstress is a self-proclaimed “open book” and writes lyrics like she’s texting.  Her music lets girls know that they can have fun too and do the same thing that the guys do like partying and going out, encouraging listeners not to worry about what anyone else thinks.  “November Nights” follows Jenny’s 2019 power ballad “Rebound” about honoring her self-respect over the love of a man and refusing to be the rebound of a crush.  Since bursting onto the scene with her debut single “California Daze” in 2018, March has continued to “do her” with releases like “FUWY” about getting lost in the moment with the person you want the most and the sun-soaked  “Talk To Me”  about indulging in a good time.  March has also been featured on collaborations like Dutch DJ CMC$’s “Love Parade” and KXA’s  “Bottle It Up”  that along with her solo music have yielded millions of streams.  You can connect with Jenny March via the following links: