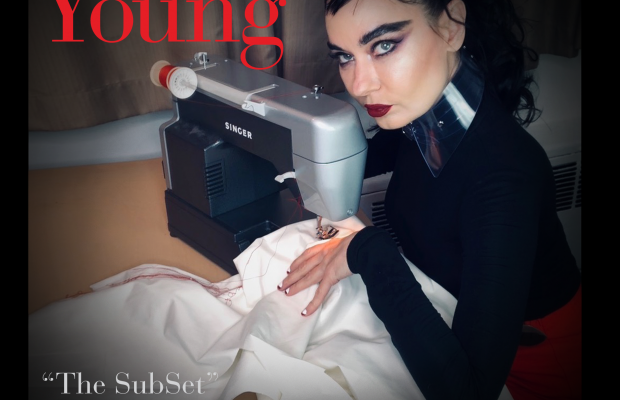 The self-produced ninth album from avant-rocker Kristen Young, also stylized as KRISTEENYOUNG The SubSet is a theatrical industrial rock-opera math themed album that I didn’t know I needed in my life. The album which was released today, is the first album I’ve listened to this fall and I couldn’t think of a better time to release something this strange and beautiful. As a longtime for of artist like Tori Amos, Emilie Autumn and Amanda Palmer I’m surprised that KRISTEENYOUNG has not been on my radar until this album. I have a lot of catching up to do after listen to The SubSet, because I absolutely adore this album.

Opening with grand track “Less Than” the album seamlessly blends lite techno-beats with almost industrial rock sounds. As this sound gets to it’s a climax post chorus Young gently drops back down. Many songs on the album do this, it really helps the listener on their toes and guessing. The way young plays with her listeners throughout that album is what I think makes it so much fun and special. My favorite track on the album has to be “Everyday Subtraction” which opens with beautiful rolling pianos that Young softly sings over before heading into a sharp sprechgesang. My favorite verse in this is the very blunt:

The song goes various real world issue that Young doesn’t care for because they’re just everyday subtractions and everyday distractions from her relationship. This song is great and a lovely warm up to the heavier “In 3rd Grade We Learned Division” that follows.

The album is dramatic and pessimistic in away that doesn’t feel try-hard, but there is beauty in the hopelessness. Towards the end of the album Young really out does herself. The Subset includes two delightful short instrumental songs “Sweet X” and “Distractions Breakdown” that are placed between the song “Pretty Twogether” the albums most poppy song. The final song on the album “Marine Dadd” is a haunting song that sounds like a victorian Irish songs, comforting but sad. Closing out the album Young leaves you with a haunting message that is best to listen to yourself.

This album is haunting and weird, I can’t get enough of it. If you like music that is odd and beautiful then you should be listening to KRISTEENYOUNG.