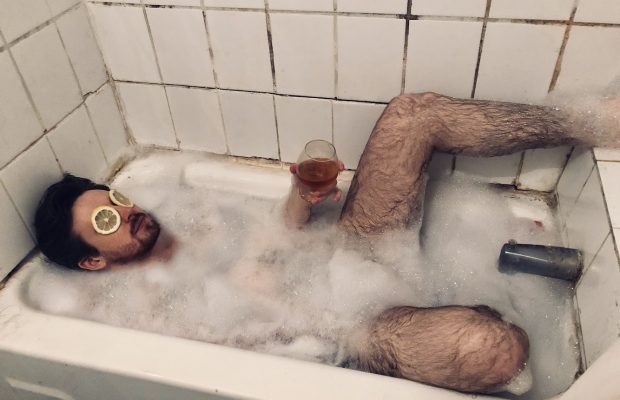 Keith Mosfet is a prolific musician who breaks the boundaries of your typical indie-pop artist. Growing up in Brantford and Hamilton, Canada, Mosfet spent his youth playing in punk and retro-60s bands.  “Mosfet isn’t really my last name, although it’s close.  It stands for metal oxide silicon field effect transistor.  I studied electronic engineering and this was my nickname in school.  I love traveling, sarcasm, and trying to figure out life”.  After becoming frustrated while working with recording engineers and producers and spending thousands of dollars on music that didn’t speak from his soul, Mosfet decided to pursue his sound on his own terms.  The result is an indie pop dream that you will not soon forget.  Mosfet premieres his new single “Superficial Hypocrite” today, along with an accompanying video.
Regarding the single, he says, “I reflected on the superficialities of my life and the people I had been hanging out with. I really didn’t like what I was seeing and feeling. Things felt fake and disingenuous. The song’s core idea was to be full of self deprecating humor. I just wanted a song takin’ the piss out of myself and everyone else in my generation (I don’t want to say millennial’s because I hate that word and there’s already a million stupid fucking articles written about us). So I took a stab at the fake instagram life style. Putting a mirror to myself, while placing a mirror to everyone else. Just a big ol’ fuck you to the collective stupidity, while trying to laugh it off”.  You can follow Keith Mosfet and stay up-to-date with all upcoming music and tour dates, as well as stream and purchase his music via the following links.
Facebook | Instagram | Spotify | iTunes/Apple Music