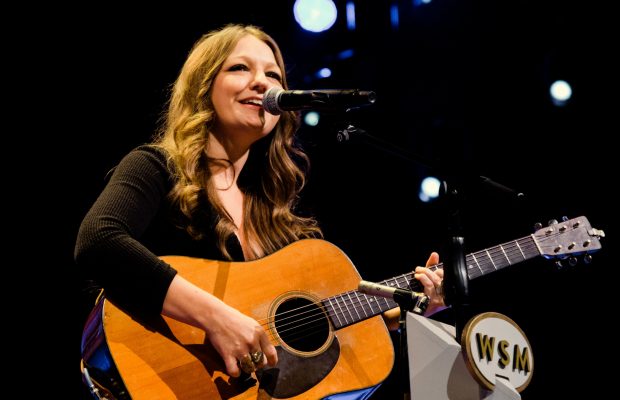 Since the release of “I’ve Got A Way”, Waldon has been busy touring the country with a tight-knit band of extremely talented musicians opening for artists such as John Prine and Jamey Johnson. Waldon has played on the Grand Ole Opry and has been featured on some of the country’s biggest festival lineups, including ROMP Fest, Pickathon, Willie Nelson’s Luck Reunion, National Folk Festival, and Gasparilla, to name a few. But despite the fame and notoriety she’s seen in the past three years, Waldon remains humbled by her success, “I’ve spent a huge majority of my life studying my favorite records, my favorite songs, and my most-favorite singers,” she says, adding, “you never stop learning or gaining from it. I’m still doing it all the time.”

Hailing from Monkey’s Eyebrow in Ballard County, Kentucky, Kelsey Waldon is certainly no stranger to the rural, workingman’s world in which John Prine’s songs come to life. Both artists are admired for their often candid, occasionally humorous view of normal, everyday life, so when it came time for Waldon to find a home for her songs, Prine and his long-independent Oh Boy Records welcomed her with open arms. Waldon has played shows with Prine before, but none as impactful as their recent appearance on the Grand Ole Opry in Nashville, TN. After performing her own Opry set, Prine called Waldon back to the stage to sing his classics “Unwed Fathers” and “Paradise” together. Following their duet, in front of a sold-out Opry audience and in honor of all the legends that have graced that stage before her, Prine announced Waldon’s new partnership with Oh Boy right in the center of the famed Opry circle.

It’s been a hard fought journey up to this point in Waldon’s career, but a strong dose of perseverance and patience has led her to greener pastures as of late; spending the last year opening for Tyler Childers, Jamey Johnson, and the head of her new label, John Prine, as well as completing her third full-length album which is due out this fall on Oh Boy.   “It’s hard for me to put into words what it truly means to me to be signed to Oh Boy Records,” says Waldon. “To have someone like John, who I have looked up to my whole life, who I have set my songwriting standards after and my general music making standards after, to have someone like him endorse my music and care enough about it to make sure it reaches a wider audience…that means everything.”
Waldon will be heading out on tour on June 28th, performing shows and several festivals dates.  You can follow Kelsey Waldon and stay up-to-date on all upcoming music and tour news, as well as stream and purchase her music via the following links.  Check out her upcoming tour dates below.
Website | Facebook | Instagram | Twitter | Spotify | SoundCloud | YouTube | iTunes/Apple Music | Bandcamp |
June 28 – Lexington, KY – The Burl (with John R Miller & the Engine Lights)
June 29 – Galax, VA – The Blue Ridge Music Center
July 13 – Central City, KY – Lu-Ray Park and Amphitheater (with John Prine)
Aug. 11 – Lexington, KY – Railbird Festival
Sept. 7 – Raleigh, NC – Hopscotch Festival
Oct. 1 – Hollywood, CA – John Anson Ford Amphitheater (with John Prine)
Oct. 3 – Oakland, CA – Fox Theater (with John Prine)
Oct. 4 – Davis, CA – Mondavi Center for the Performing Arts (with John Prine)
Nov. 11 – Punta Cana, Dominican Republic – All The Best Festival
Dec. 6 – Orlando, FL – Bob Carr Theater (with John Prine)
Dec. 7 – Clearwater, FL – Ruth Eckerd Hall (with John Prine)