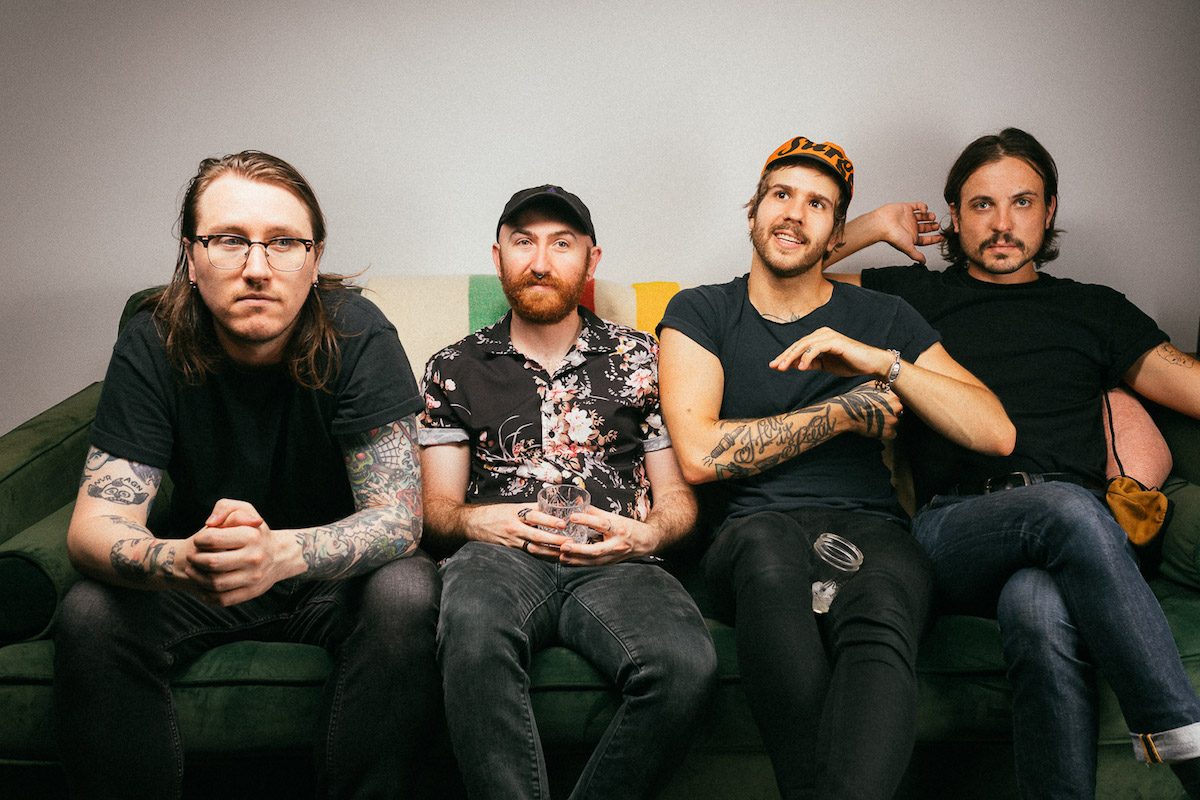 Chicago punk band Kali Masi has been heavily touring and self-promoting for the past 6 years.  Having met in high school, singer/guitarist Sam Porter and drummer John Garrison started playing music together, later forming The Howl, which they later changed to Kali Masi.  The band has released a few singles and EPs and released their widely acclaimed album Wind Instrument in 2017 and their much anticipated sophomore album [laughs] in March of this year.  Both albums were recorded by hardcore icon Jay Maas, co-founder of Defeater.  Kali Masi is Sam Porter (guitar/vocals), John Garrison (drums), and Anthony Elliot (bass/vocals).  Guitarist/vocalist Wes Moore recently left the band and Tim Roark is filling in on guitar/vocals.  With their US tour underway, the band heads to Europe next month and then hope to write some new songs soon!  You can connect with Kali Masi via the following links and find tour dates below.  Photo credit: Michelle Johnson.

Sam– The first couple of times I hung out with John when we were growing up were all really fun. I remember jamming ‘Back to the Motor League’ by Propagandhi and seeing The Hives and going to a Star Wars Exhibit at the Museum in Chicago. John has always been an incredibly sweet person and great friend and always down to start bands and play shows together. He’s the only person I can confidently say is down for anything with this band, since day one! We hopped in the van together, just completely winging it, and it’s been awesome. We used to practice in my parents basement, and briefly in my bedroom before we all moved to the city. We played a Halloween show as the original 2-piece version of Against Me! (a band we both really loved) and I think that kind of sparked the idea of us starting The Howl, which blossomed into Kali Masi and its bonkers how many places we’ve been able to go with this band together!

You have talked about how much of an influence house shows had on you growing up. In what ways did those shows spark your desire to start a band and play music? What are your thoughts on how house shows have endured over the years and in what ways do you feel they are impacting today’s youth?

Sam– The house show will never die, but I have no idea where house shows are at right now, what with COVID and everything. As long as there is a rug and cinder block and a place to put a drum kit, there will be shows. We all grew up going to basement shows and house shows. I think there’s something really liberating to them, a huge sense of community and equality. You’re literally on the same LEVEL. No stages or anything. It inspires people to pick up instruments or microphones or whatever. If there is anything I’ve learned from house shows, it’s that music is for everyone.

You released your first full-length album Wind Instrument in 2017. How would you say that album best described where you were sonically as a band at that time and how do you feel your sound has evolved over the years?

Sam– I think that record is really solid, and I’m proud of it. Looking back on it, I think that some of the choices we were making as songwriters weren’t as avant garde as I felt that they were at the time. But, with that record, and the newest one, there is an accuracy to the moment, to the people we were when we were writing and recording them. So I wouldn’t change much. I think now we’re a little more grounded. We have more of a sense of who we are/who we’ve been so it makes figuring out where you’d like to go a little bit easier.

You have said that when making music/albums, that the time it takes is the time it takes and how there are unrealistic expectations set for artists to be completing masterful works of art with emotional value in really short time frames/album cycles. Have you guys ever felt that pressure to release music at a faster pace? Do you see social media/streaming platforms as contributing to this and fueling people’s need to have a constant stream of music from artists and creating the need for artists to stay relevant?

Sam– I don’t think we’ve ever felt much outside pressure to release music, for better or for worse. There are countless lessons to look to for how outside pressure can really ruin bands, so I think any pressure we put on ourselves is just for each other to be the best we can be and make stuff we’re proud of. I think social media does play a part in that. On the surface it seems like everyone is doing everything all the time. I always think about plants, and how by the time we see them break the surface, they’ve already been working at it for a really long time. That’s how art can be sometimes. Sometimes it photosynthesizes and sometimes it explodes. We’ve always worked at our own pace. Perhaps it would be a neat experiment to try to make a record in 3 months or something, and see how it turns out. Maybe it would be our best record!

You released your second full-length album [laughs] in March of this year and is described as centering around the universal truth that the power and courage to be who we are is and always has been inside of ourselves, rather than in the arms and minds of those around us. What can you tell me about the writing and recording of the album, the recording of which was done right before the pandemic shutdown occurred in March of last year.

Sam– The record was written incrementally over the span of about three years, the majority of which was done in the 6 months prior to recording (Feb/March of 2020) and some during the recording sessions in Haverhill, Massachusetts. I would describe the writing and recording process as contemplative, collaborative, cathartic and not something I have experienced or will forget ever in my life. COVID was just a sub-headline when we were wrapping up the record, as the shutdown happened one week after we got back home to Chicago.

Having not seen each other throughout the pandemic and releasing the record during this time, you guys relied a lot on Zoom calls. What can you tell me about not seeing each other for such a long stretch of time and staying connected and offering support to each other? Do you feel like it changed your relationships with each other?

Sam– As soon as lockdown started, I made a list of all of my friends and did some rounds of face time calls when I remembered to, to see where everyone’s heads and hearts were at. It was a pretty uncertain and scary time initially, but there was some comfort in knowing that while you were pretty isolated, we were sharing the experience and had many ways to stay connected. To be honest, we were really fortunate to have the lockdown happen when it did because it allotted us time to really focus on the record. For me, during that time, I learned a lot about myself and my friends by seeing some really cool parts of them shine through that would otherwise be clouded by things like work and other societal pressures. Everything was stripped away and I grew to appreciate it.

After all of the uncertainty over the past year/year and a half, what has it been like to start touring and playing live again?

Sam– It’s been a little more difficult to find our footing initially, getting back in the groove and everything. We’re really pumped to get things going again and excited to embrace how things have changed, both on our end and with the post-pandemic music world.

You have said that with every release you get a little more comfortable with yourselves and a little bit closer to finding yourselves as a band and that [laughs] feels more like you guys than anything you have released prior. What have you learned about yourselves with each release, as well as what you want as a band, and why do you feel that [laughs] best represents you so far?

Sam– My intention with art is always to just try to make something that feels accurate to me at the time. It’s not about perfection, it’s about emotional accuracy. We’re always growing and changing and trying to be the best version of ourselves, you know? There will always be a conflict invigorated in that process, too. For me, a lot of [laughs] is about platonic friendships, what makes them work and break down. Where and when to hold ourselves accountable for the situation that we’re in. I learned that things are more manageable when you hold yourself primarily accountable for what’s happening to you.

What can you tell me about Wes departing the band and having your friend Tim Roark perform with you for your upcoming shows this year? What are your hopes for the band going forward?

Sam– We are extremely happy for Wes and all that he has to look forward to, and we’ve parted ways on nothing but the best terms. We’re super stoked to have Tim with us and to charge into this next year with him. It’s really a whole new chapter for Kali Masi.

You guys have been selling a limited edition, signature hot sauce recently! How did the opportunity come about for Kali Sauci to be made and sold? How has the response been?

Sam– Our pal Kyle has a hot sauce company called Soothsayer that’s Chicago-based and he makes all of these really incredible hot sauces. He does a lot of collaborations with bands and we’ve been meaning to put our heads together for Kali Sauci for years. Kyle and Anthony spearheaded the entire operation and it turned out to be the killer. My obvious bias aside, the sauce is super delicious and has been a really hot merch item. We can’t keep it in stock!

What next for Kali Masi?

Sam– Well, right this very second, we’re about to stop for gas en route to Nashville where we’re playing at The High Wattt with Pet Symmstry and Ratboys. We’re on our way down to Gainesville to play three sets at Fest and then head back home with those bands. This tour has been really rejuvenating so far. We’re heading back over to Europe next month and we couldn’t be more excited for it. Taking it all as it comes. Hope to write some new songs soon.