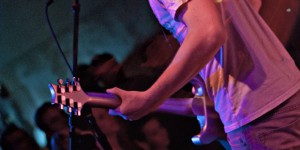 The studio of the Warehouse Live is full with many people getting in their last summer concert, a few people had a tough choice to make last Friday. Between the Summer Slaughter tour and Bowling for Soup, who can chose? Well I can, and I think I my choice was right.

The show opened with the pop rock band Sunderland from Hood River, OR, whom were nice enough to let me shoot them side stage. Sunderland opened their set with “Kaylee Keep Your Hands Off” a upbeat true pop rock song about a girl that just can’t take a hint. The band was a hit with a lot of people, even the adults dug them. Sunderland’s performance was pretty impressive, I can easliy see them on tour with bands like A Rocket to the Moon and All Time Low (a favorite band of Sunderland’s singer McKinley Kitts) in the future and making good moves for their career. The crowd really got moving when they played an brilliant cover of “The Middle” by Jimmy Eat World.  It was the first of many awesome cover that was on the line-up for this show.

After Sunderland got people moving The Dollyrot’s took the stage and shock things up a little more. With their fast catchy tunes and wonderful stage presents this California trio defiantly knows how to put on a show. This was my first time seeing all the bands on perform, and although I’m a fan of the Dollyrot’s I’ve never really noticed how fast their songs on. While I watched frontwomen Kelly Ogden flawlessly sing every line of songs almost without breathing, now that’s what I call talented. They did a series of cover including songs from artist like the Misfits and Joan Jett. Something that made this line-up great for me was the chemistry between The Dollyrot’s and Bowling for Soup. The two bands have spent the last two years together touring and working together, and you can see a real bond between them, which always makes shows more likable. The Dollyrot’s also seemed very grateful for their friendship with Bowling For Soup, who in many ways have similar performing styles. I can understand why they would tour together. Shows are just a million times more amazing when the bands on tour work so well together, and really who wants to see two bands that hate each other play music togehter?

Last, but not least were the home state boys. Everything is bigger in Texas, even down the tiny room of the Warehouse Live could hold the massive talent that is Bowling for Soup. I’d like to think that these locals do their state a favor and play this amazing in ever state and something tells me that they do. It’s a shame that this is my first Bowling for Soup show ever, but I’m happy I’ve been able to see them at least once in my life. It was a honor to watch them perform. They played all their best hits and the theme song to the hit Disney chanel show Phineas and Ferb, which was really relvent considering that this weekend was most kids in Texas last weekend of summer. During the song “Girl All The Bad Guys Want” the band made a paused and got together as a group allowing all everyone in the audience to get a group of the band. It was wonderful. The band really knows how to please a crowd, even their between set banter is extreme entertaining. They closed their set with their song 1985, but they quickly returned the the stage for an encore to feed their hungry crowd with more. It was wonderful.

Overall the night was well put together and with an amazing new band and a  two of the most talented bands in the music industry.