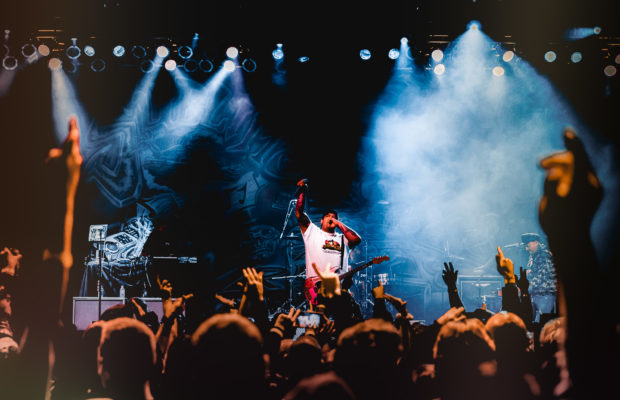 On Friday night the Hard Rock Rocksino in Northfield, OH was packed to the doors. Much to my enjoyment, the Rocksino decided to have a general admission (GA) area in the front half of their venue with seats in the other half. General Admission audiences always seem to enjoy the performance much more than reserved seats, it feels like. Tonight was no exception.

Opening the night were The Whiskey Hollow, a local band from Cleveland. Their set was very catchy and the audience seemed to enjoy it very much. Their song The River talks about Hollywood and lead singer Madeline Finn shared a story about her very short stint on American Idol and said it was all worth it because she got to hug Katy Perry.

Shortly after 9pm Sublime With Rome came on stage and were greeted by an enthusiastic audience. This was their tour opener and you could tell how excited the band was to be back on stage. Singer Rome Ramirez wore a simple “Joe’s Flashdancers” T-Shirt and looked very comfortable on stage.

Since Sublime with Rome is a musical collaboration between Eric Wilson, formerly of the ska punk band Sublime, and singer and guitarist Rome Ramirez, they naturally played all the biggest Sublime hits the audience wanted to hear.

Before leading into one of their biggest hits “Badfish” the band thanked the audience for I quote “keeping them on the road for ten fucking years”.

If you get a chance, catch them on their current North American tour. Tour dates can be found here.