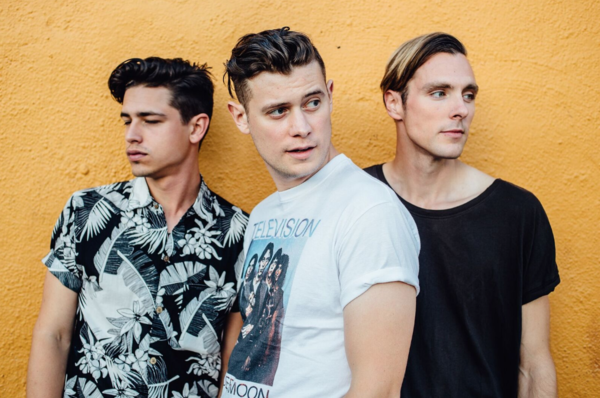 Dreamers is bringing a psychedelic twist to indie-pop, and we are loving it. Hailing from Brooklynn and residing in LA, this trio will be making an appearance in your latest playlist, and daydreams, in no time. Made up of lead vocalist Nick Wold, bassist Marc Nelson, and drummer Jacob Wick. Get familiar with what is inside their creative minds and inspires their dreamy tunes.

As a band, you guys have made a public declaration- you call it your manifesto. What drew you to do create that and how has it shaped you as a band or as people?
Nick: We think that music, and especially rock and roll, is tied to philosophy and thinking about life. That’s kind of the point of being artists to us. The name Dreamers is big and ambitious and we just wanted to explain that and what we mean. And it’s also just fun.

On your website and posts, you all also incorporate a lot of graphics- how does art tie into your philosophy?
Nick: The visual side of music is important to us so we wanted to show that. We have a lot of things about sleeping and dreams being like goals, but also just being crazy and having vision trips.

How do you keep a constant stream of creativity flowing? Do you make your own or draw from what’s around you?
Nick: We’ve done a lot of drawing in from stuff we’ve loved or that’s inspired us- like music, books, and film. But we actively try to create. I’ve found for me that the best way to write a song is to just sit down during the day and be like, “I’ve got to write, I’ve got to finish something right now.” Then you start kickin’ it around.

In your writing process, is it more of the sit down and don’t stop until you’ve finished, or does writing inspiration sort of come to you over days or weeks or even months?
Nick: I’ve tried like everything. But the most success I’ve had is when I have a deadline and know I have to finish something right now- whether it’s good or not. Then, eventually, you just force it out and it will kind of take a life of its own and take the good or leave the bad.

Did you or the other guys have a heavy musical influence growing up?
Nick: Yeah, the three of us have a lot of similar influences which I think is really cool. We all definitely grew up on the Beatles- it’s a really big thing for us. And 60’s rock in general- Hendrix, the Doors, that kinda stuff. And then we have a thread of 90’s grunge. I grew up in Seattle so Nirvana is a big influence.

Is Brooklyn just where you guys came together?
Nick: Yeah, that’s where we started the band but we are from all over the place. Nelson grew up in Maryland and we were living in Brooklyn for years after we met. Then we moved to LA and that’s where we are living now and where we met Jacob, who is from California. And we’ve been travelling and touring, so we feel kind of nomadic at this point.

How would you say the Brooklynn or the LA music scene has had an influence on your music?
Nick: Being in NY is cool because there’s an energy there- a certain drive and certain desire to do interesting things. So there, we are surrounded by those kind of people. That was good for nurturing the artistic drive. LA is more industry driven, and we kinda just got to business, recorded an album, and made stuff happen.

What would you say the major differences between NY and LA are?
Nick: In LA the weather is nice and cool. A lot of friends in NY are moving to LA right now since NY is getting expensive.

You said you’ve signed with a place in LA- did you do your other EPs and music independently?
Nick: Our first EP was done independently, and we did that in New York. About a year ago we signed with this record deal and our 2nd EP “You Are Here” is on the label. So will our full length album.

Do you think working independently gives you a greater creative control- or has signing with a label not really affected your music or what you believe in?
Nick: It totally depends on the label situation you’re in. I’ve heard a lot of different stories. We are in a pretty good one though and I think the people we work with get us. They don’t try to change us musically- we have gotten to create all the music. We kind of got free range on that.

Do you feel pressured to keep up a certain image for media or fans?
Nick: We are pretty free flowing. Most of the pressure comes from ourselves because we are really trying to make stuff happen- both artistically and getting tours.

You’ve been on and off the road, both headlining and opening. Do you feel like you perform differently when you are trying to win over other bands’ crowds, or do you think that you always play your hardest?
Nick: I think it’s mostly all the same to us. We are going out with Zella Day next week and I think it’s gonna be a lot of the same people who have been coming to our show, so it’s kinda like having a show with extra people.

Have you or the other guys played in other bands in the past?
Nick: All three of us have been in bands our whole lives, which is cool- we all wanna be better. I had been in a band before called “Motive” for years and had the same manager we have now, but that broke up. Nelson toured the world with other bands and Jacob was the lead singer of a band for many years.

Is there anything in particular, from working in past projects that have helped you kind of figure out exactly what you wanted to do when you started Dreamers?
Nick: I feel like I’ve always had the same goal musically, and it’s more than just learn how to do it better. At first you have an idea and wanna write a song but I isn’t until a hundred songs later you finally start to figure it out. So I think it’s kinda like that.

Why do you make music? To entertain? Inspire people to be more and do more? Or do you just use it as an outlet for creative energy?
Nick: I think we make music because we have this drive to. And we wanna show why we have that drive and why music is important (and always has been) to people. I think it’s kinda like why we wanted to call ourselves Dreamers. There’s a certain aspect of society that’s driven by ideas and it needs people to go forward and think and be motivated by philosophy. That’s kinda the role we hope to have in society. We have huge potential for shaping the way culture is and the way people think.