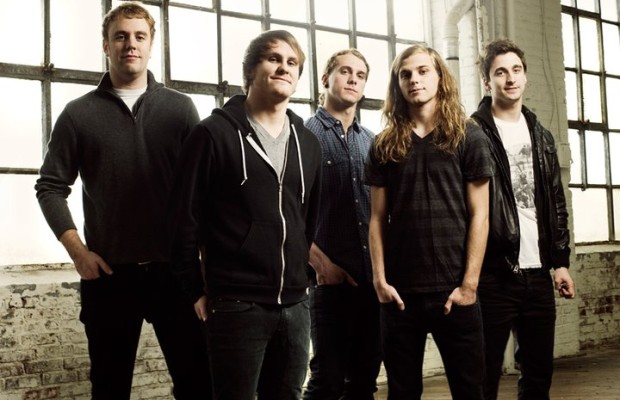 What makes Life On Repeat different from other bands?
I think we have a sound that hasn’t been done before. We blend melodic, heavy music with mostly singing. It’s heavy enough to get down and energetic to but we sing over the parts which definitely makes us different in today’s scene.

How have you grown musically since you’ve joined Life On Repeat?
I think that we have gotten a lot better with actually writing songs, rather than just writing riffs. Anyone can write a cool part but not everyone can make a song out of it.

Is there a message that you’d like to spread through music?
That it’s okay to be different…nothing great comes from being another face in the crowd. That’s something we can do both musically and lyrically.

You will be releasing your first full-length album out on June 14th. Can you tell us about the album?
It has been in the works for over two years now and is honestly the best music we have ever written as a band. We hope everyone can tell that by the first listen through, and can become an instant fan. There are a lot more riffs, more technical parts, and more aggressive vocals rather than just singing. There’s just more of everything!

What is your favourite song on the album and what does it mean to you?
Not The Cause”. Musically it’s a super energetic rock song and really made us step outside of our comfort zone, as far as going more rock and aggressive. Lyrically, it’s awesome as well and not the typical, “sing about a girl” song, ha.

Are there any songs on the album that you think fans would be surprised with?
I think “Feet Under” is really going to catch people off guard because of the blues solo intro, but once they hear the entire song they will be like “Oh, okay…now I get it!”

Is there a concept behind the album or the album title?
Our path with the band hasn’t been easy at all. We come from a small town which doesn’t give us the benefits and rewards other bands have living in cities. We work twice as hard to do things a lot people just get handed and there are times when there’s so much stress it’s hard to get a wink of sleep. So we thought “Struggle and Sleep” was appropriate for the record and to generally sum up the last couple of years for us.

Did you encounter any new challenges while writing and recording this album?
That’s probably an understatement. We are so picky when it comes to writings song that we will re-work it 3-6 times, recording each version in full. I’d say every song was a three week challenge as far as writing!

The band will be going on tour this summer with There For Tomorrow, Conditions, and Oceana. How excited are you?
Too excited. We are super close with Conditions. And Oceana and There For Tomorrow are both bands we look up to and listen to, so it’s something we’ve been excited about since the idea of it first came about.

Are there any cities in particular that you are excited to visit on the tour?
I really like going to Nashville. There’s always stuff to do before and after the show and it’s just a great music town.

Are you planning any crazy things to do on stage? (ex. or an unexpected intro perhaps?)
Yeah, we are going to play the set naked each night. Sike!

What is one thing you would change in the world that would help others?
I would take away the Internet…enough said.

Turning back five years, if you were told that you would be at the point where you are now, would you expect it?
Not at all. I had no idea what being in the music business is really about. You always think that you’re just going to blow up quickly and be in a tour bus the next day.

Where do you expect to be in a year or so?
Hopefully touring in front of hundreds of new fans coming just to see us. It would be awesome to see the record doing its job!

Is there anything else you’d like to add?
Come see us on tour this summer and please don’t stop buying music!