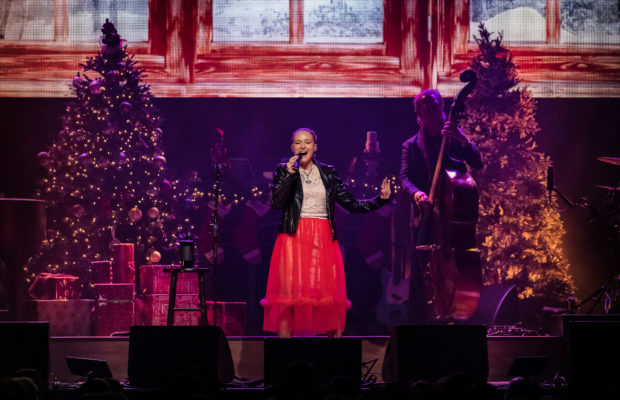 What would a Holiday tour be without having the family in tow to spend the holiday season together? Opening up the night were her father Atz and siblings Atz Lee and Nikos, who sang passionate songs about life in their home state Alaska. Atz shared that before every meal the family would get together and sing a song. You could clearly see how proud he is of what his daughter and sons have achieved.

Jewel came on stage just as soon as her father and siblings finished their set, and was joined by a full band. The first couple of songs were Christmas songs and the stage was lit up with beautiful lights and Christmas trees. Her rendition of Ave Maria was incredible and you could hear a pin drop, as the audience was in awe.

After playing a few Christmas songs, she sent her band backstage and started playing acoustic requests. She played tracks like her hit single Standing Still, Who Will Love Me?, Rosey & Mick, Foolish Games and Goodbye Alice in Wonderland.

She then invited her father back on stage and shared that they have been singing together since she was five years old. She told the audicen the story of how her grandfather came to Alaska on the last ship leaving Europe during World War II to start a new life and they played a song called Homestead together, describing life back then in rural Alaska. On the screens the audience could see some old photos and videos from the family’s archive during the performance.

Next she dedicated the song My Father’s Daughter to her father, who at this point was back in his seat in the audience watching his daughter perform. Most people did not notice, but he got up and slow danced with a few lucky concert goers in the aisle while telling them how much this song means to him. It was an incredible touching moment.

Afterwards she brought her brother out on stage to perform her hit single You Were Meant For Me, followed by a few more Christmas Classics, before leaving the stage after a very solid 1.5h set.

And what would a Homemade Holiday Tour be without homemade items for purchase in the lobby? Her 7 year old son Kase sold his homemade bath bombs and the rest of the family sold bracelets, jewelry and of course tour merchandise.

If you were not at the show, you can still do your Jewel Christmas shopping online.

Her dad sells his homemade Wild Root Bracelets here.
Jewel sells her homemade jewelry with her friend Colleen. Her Songlines collection can be found here.

Her tour just started and if you get the chance to see it, I would highly recommend you do.
Her upcoming tour dates can be found here.