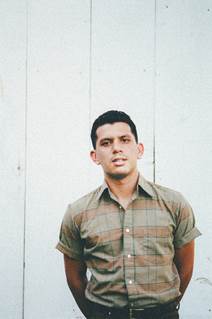 Rising Americana singer/songwriter Jeremie Albino has released his latest single “Hard Time” with an accompanying video.  Told from the perspective of a mechanic, the song’s narrator lets his mind wander and linger on every mistake he’s made. “This song is about doing someone wrong and having to live with what you’ve done, hoping one day they’ll forgive you,” Jeremie Albino explains. Creating the concept for the video himself, Jeremie pays homage to his father, Pardo Albino, by recreating their family’s taxi meter shop. There he credits learning the importance of family and hard work. Jeremie’s upcoming debut album, Hard Time, is set for release August 9th on Cinematic Music Group.

Trading the booming metropolis of Toronto for Prince Edward County, a decade of country living has given Jeremie the time and space needed to create an album overflowing with heart through vivid storytelling of life and love. Emulating the heroes before him like Lighting Hopkins and Skip James, Jeremie Albino offers a soft and insightful touch with his folk songs, and stomps and swaggers through soulful rock ‘n’ roll.   Glide describes the album’s lead single “Last Night” as “a rock and pop juggernaut that reflects the hearty musicianship of Nathaniel Rateliff and a throwback honkytonk sensibility. Albino appears to be the next in line of emotive band leaders that project soul and directness atop a head turning sound.”  The artist is set to tour with Great Lake Swimmers and JD McPherson throughout the summer.  It was also announced today that he will open for St. Paul and The Broken Bones later this fall.  He is also set to perform at Rockwood Music Hall in NYC on August 1st.

You can follow Jeremie Albino and stay up-to-date with all upcoming music and tour dates, as well as stream and purchase his music, via the following links.  Check out the music video for “Hard Time” above.