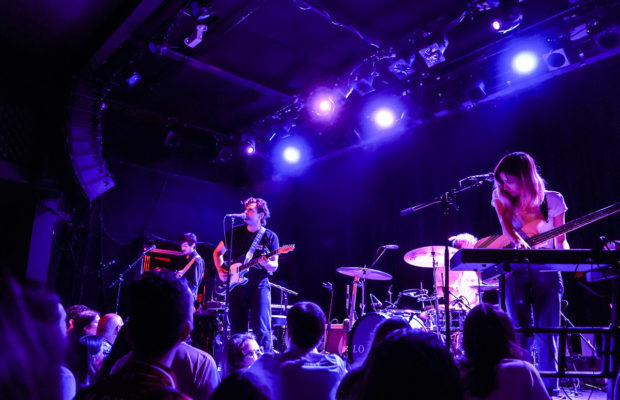 On Saturday night as part of the Panorama after shows Lo Moon and Jay Som played to a crowd of enthusiastic fans at Music Hall of Williamsburg. Lo Moon is an American indie rock band from Los Angeles that is currently signed to Columbia Records — they released their self titled debut album in February and it did not disappoint their fans. Led by Matt Lowell on lead vocals, Crisantra Baker on bass/keyboards, Samuel Stewart on guitar, and Sterling Laws on drums their set was filled with crowd favorites off of Lo Moon including “This Is It,” “Loveless,” “Real Love,” and “Thorns” that were mouthed word for word from fans throughout the crowd including myself. They will be touring this fall with CVRCHES so be sure to get to the show early to see them open if you are planning on going— their set is one you do not want to miss.

Up next and closing out the night was Jay Som, ( Melina Duterte) a Los Angeles based singer/songwriter, multi-instrumentalist and producer. She sang songs off of her albums Turn Into and Everybody Works — persevering through singing the songs even though she was sick. This show was the end of her tour — Oliver Pinnell on guitar, Zachary Elsasser on drums, and Dylan Allard on bass — after being on the road with Paramore and Foster the People.