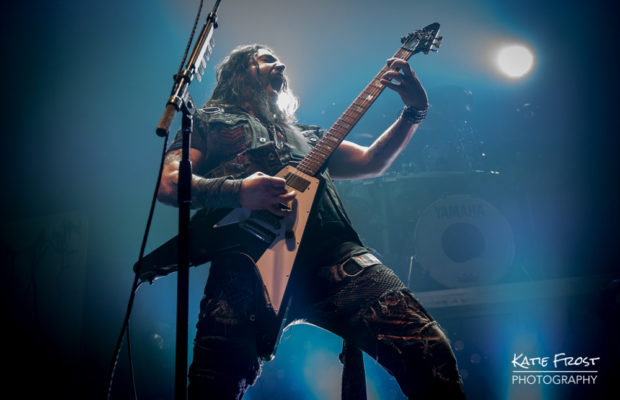 As one of the most well-known heavy / thrash metal bands in the world, Machine Head need little introduction. Tonight was the first of two sold-out shows at London’s iconic Roundhouse in Camden as part of the band’s 10-date UK-leg of their Catharsis World Tour, promoting their ninth studio album of the same name (released in January 2018).

The first time I saw Machine Head live was at Hammersmith Apollo back in 2016 and it was an incredible experience. I remember we were sat on the balcony and at one point I looked down into the crowd and it was just one huge circle-pit; hundreds of people having the time of their lives – it was actually quite moving (in a bad-ass metal way, obviously). The show tonight was, dare I say it, even better!

Doors were at the early time of 6:30pm and as I approached venue I could already see a snake of black-clad metal fans trailing from the Roundhouse right down the road towards Camden Town, as well as enjoying some pre-show beers outside the local pubs. Once inside the main space of the Grade II listed former railway engine shed I could feel the excitement in the room growing as people trickled in. At the far end of the room sat the stage, which was set up almost like a room with blood-spattered white walls emblazoned with the Machine Head log, and Dave McClain’s drum kit sat elevated on a plinth.

With no support act the band took to the stage at 8pm, by which time the 2,900-capacity venue was heaving with excited Machine Head fans about to enjoy an Evening with Machine Head. The band opened their set with “Imperium” from their 2003 album Through the Ashes of Empires. Plumes of CO2 erupted from the stage and the cheers from the crowd filled the room as Robb Flynn raised his arms triumphantly to the crowd before the band launched into “Volatile” from their most recent release Catharsis.

Since their formation back in 1991 Machine Head have released a total of nine studio albums, so they had no shortage of material to fill their humongous 24-song set. There was a glorious mixture of the old classics such including Davidian from their debut album Burn My Eyes (2004) together with Aesthetics of Hate and Beautiful Mourning from The Blackening (2007), and two of my personal favourites “Locust” and “Darkness Within” from Unto the Locust (2011). Robb Flynn encouraged the the crowd to form circle pits at various points throughout the evening, and also to “jump, jump” during some of their more nu-metal tracks such as “From This Day” (The Burning Red, 2009). Machine Head have dabbled in a few variations on their musical style during their 27-year history, but their complex song structures, groovy guitar riffs and Flynn’s unmistakable vocals provide that recognisable Machine Head sound that links their entire body of work together seamlessly.

The band’s mammoth set was punctuated with instrumental solos by Phil Demmel on guitar and Dave McClain on drums, which was a great way to showcase their skills and the crowd applauded graciously. Throughout their set bassist Jared MacEachern displayed some of the best hair-windmill skills I have seen in a long time, whilst Rob Flynn snarled and screamed into the mic. One of the perks of being a photographer is that I was lucky enough to be able to watch the band close up from the photopit for the first three songs, before retiring to my favourite spot behind the sound desk with some friends and some luke-warm, over-priced lager to enjoy the rest of the show.

Machine Head closed the evening in the best way that they possibly could have, playing one of their most famous songs “Halo” from one of their celebrated album The Blackening, complete with confetti cannons toward the end. As the last chord rang out and fragments of red paper gently fluttered to the ground Robb asked the crowd to raise their hands in the air for the obligatory photo from the drum-riser. He encouraged the women in the crowd to get up on the shoulders of the men which I thought was a nice touch. It had been another unforgettable Evening with Machine Head and I will certainly be back for more next time they bring their magnificent show to London.

The remaining Machine Head UK tour dates are below:

The Blood, the Sweat, the Tears

Clenching The Fists of Dissent

Is There Anybody Out There?