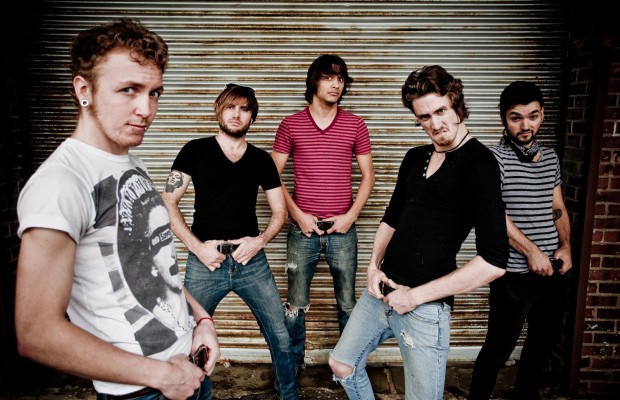 Just recently, you released a new EP called “The Pits” filled with five rather spectacular songs. What inspirations did you have behind them?
We wrote probably 9 or 10 songs about a terrible winter we all had while we were writing our album when we felt like we were spinning our wheels and goin’ nowhere. We don’t like to not be touring, but we took a few months off and spent 10 hours a day in a storage space behind a liquor store beating our heads against the aluminum trying to write. Eventually we all got depressed, some of us developed some pretty real but pretty funny i’ll-deal-with-this- problem-later kinda alcoholism (that they maintain to this day), all of our girlfriends left us because we were miserable people to be around, and we lost our bassist because he’s going to space.

How would you say that your new release differs from your last album The Circus?
Working on an EP is very different than working on an album. An album has a theme and pacing and flow and The Circus, in particular, included a concept piece that made up the majority of the album. The EP is must less structured. The songs stand alone and have no purpose beyond being great songs. We also tried to focus on making every part within the songs sound catchy and interesting enough that we didn’t have to rely on little gimmicky transitions or bizarre structures to make them sound fresh.

The Venetia Fair is definitely unlike anything that I’ve ever heard. When the band first started did you aim for a specific sound?
We generally try to aim for a different sound for each song. When we started, I would sit with our old drummer and just throw out a tempo, genre and feel, he’d write out 10-20 seconds of music, i’d step in and make my final notes, we’d bring it to the band, and then turn it into a song. We knew that we could pretty much tackle any genre we wanted and that if we had the different members of the band play it (or sing it) they way they like to (loud), it would sound like us. So we tried out a lot of different things pretty fearlessly. We write slightly differently now that we’ve had some member changes but the idea is still there. Every song begins with a concept, a feel, a genre instead of a guitar riff or melody.

When was it that you knew you wanted to play music and be in a touring band? What sparked this?
My mom has this flyer saved that I made in Corel Print House on my PC running windows 95 that says “I’m starting a band. So far, I’m the only member. Call this number if you want to be in my band”. I was maybe 6. I didn’t play any instruments at all.

So you guys played quite a bit of dates on Warped Tour. What was this experience like for you?
Exciting and exhausting. We did Warped Tour pretty goddamn hard. We weren’t letting any opportunity make new fans slip by so we were out in the sun all day talking to people. The best part was having the opportunity to convince them that we were actually worth their time. We’d throw headphones on ’em, they’d be into it, they’d take a chance on wandering by our stage and then we got to show them what we were really all about. We try to put on the best, most over-the-top live show we can so we really turned some heads at Warped Tour and we watched our crowd grow as more people stopped to see what was goin’ on.

Was there any new challenges that you’ve had to face while on Warped Tour as opposed to other tours?
Warped Tour has almost nothing to do with the type of touring we’re used to. Touring is a lot of downtime. Long drives, waiting for your set time, etc. Warped Tour is literally zero down time. We’d wake up at 8 or 9, eat a hurried, bad breakfast, set up our tent, promote our set all day, play, eat something canned for lunch, sell CDs and merch for the rest of the day, pack up around 8, barbecue, shower out of a bag, leave by 10 or 11 PM, drive 8 or 9 hours, repeat. Sleeping happens while driving. But we came prepared, and we’re not pussies, so it was fine.

Did you attend Warped Tour as a kid? What is your favourite memory?
The first warped tour I went to, I watched Goldfinger put a twinky in their drummers ass, watched Alien Ant Farm (Smooth Criminal had just come out and they were rockstars) but then I never heard of them again, and I bought a Homegrown shirt that I thought made me look awesome. I guess that year was pretty big for bands with big cover songs. I also had no idea who maybe 80% of the bands were because I was like 13 years old and just wanted to watch Sum 41. Then I saw Rancid and thought they were so cool that I pretended to like their music even though there’s no way I could’ve really liked it. But I guess that’s what Warped Tour is all about when you’re 13. (Note: I am old).

What are your thoughts on illegally downloading music? Do you see it being the downfall of the music industry?
There are so many things leading to the downfall of the music industry as we currently know it that I think it would be an oversimplification of a problem to choose just one. I mean, I believe in the protection of intellectual property and all that, but I also believe in business. People are going to steal your songs because its easy and free. Its too difficult to appropriately police the issue, so you better have something else of value to offer people that they will pay for. Cable TV used to try and charge per TV and would cut your cable splitters if they saw them. Eventually that made no sense. So they had to find new things to offer people that they WOULD pay for. Better service, premium channels, High-def, etc. The music industry is still trying to figure out where money is and how they can rework their business model to get it. ‘Cause it’s not coming from record sales. iTunes provides a great service. So they make some money. Good. Record stores make you physically go to them and sometimes sell you 9 songs you don’t want just so you can buy the one you do. So that’s not a very popular service anymore. Sorry.

In your opinion what is the most overrated thing about the music industry?
I don’t know, I feel like bands do a lot of pandering, which seems like a waste of time to me. Let the record labels be the machines that just create bands that pander to the current trend in order to make money. They can probably do it a lot more efficiently. Bands are supposed to be artists, the ones making the NEXT thing not the current thing. They should be the inventors, not the assembly line. I know this is a totally idealistic and naive outlook, but I just feel like the industry should try and compartmentalize and specialize a bit more. I don’t know why there are bands struggling to make it that sound just like a million other bands that have already made it. Leave the mass production to the professionals, try and make something new that will later be mass produced. I guess that doesn’t perfectly answer your question… its fine…

What should we expect from The Venetia Fair in the next couple of months?
We’ve got a couple months of touring ahead of us, East Coast then Canada then the whole country. So we’ll be around. Then we come home and finish that fuckin’ full length…

Thanks for the opportunity! Is there anything else that you’d like to add?
Sorry I talked so much. The Venetia Fair is weird and loud and old.