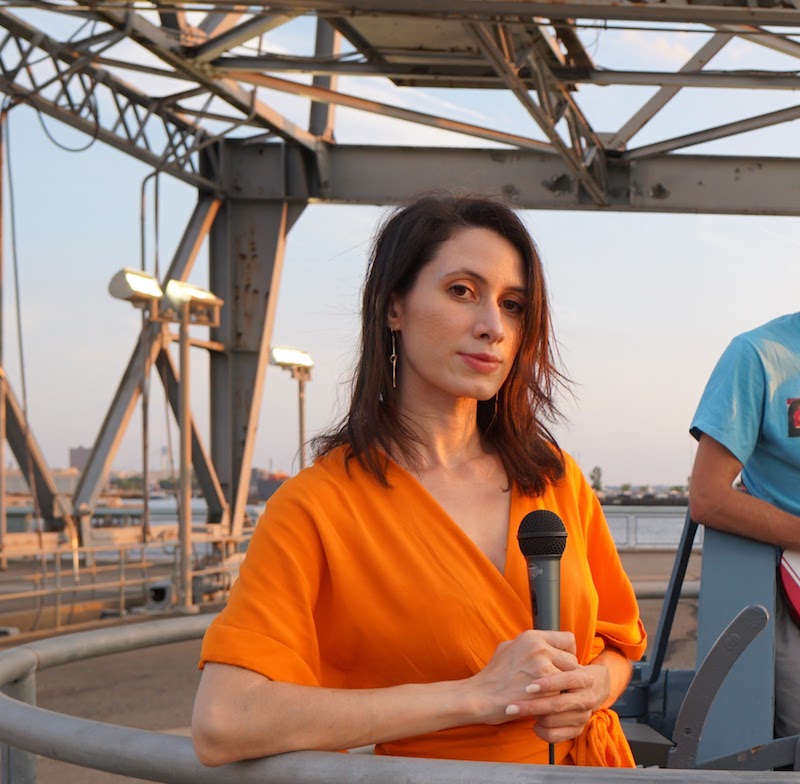 Soul-infused Brooklyn pop artist Janie May released her debut EP Balance Me on November 30th, an album that features two songs that she worked on with producer Zach Fuller and a collaboration with The Beat Disciples.  In her words, “My EP Balance Me is fundamentally about growth and the growing pains that often come along with it.  Sometimes you can know quite well that something needs to change yet struggle to break free of the cycles that you find yourself in. Ultimately, however, it’s about remaining hopeful that things can and do shift in due time. I hope these songs resonate with you and give you a reason to dance. I think we need that now more than ever.”  Born Dianne Botta, the character Janie Mae Crawford from Zora Neale Hurston’s classic novel, Their Eyes Were Watching God, inspired her to adopt the persona of Janie May, using music as a way to find her voice and strength as a 21st-century woman.  Gravitating towards music and dance from a young age, she started writing songs in college, writing a recording a few songs through collaborations with other artists.  After feeling a bit lost and disconnected as an artist, she quit writing for a few years, until a 2016 songwriting course and some NY Topliner Camps in 2017 pulled her back in and rekindled her inspiration.  Her latest single, “Not Alone”, was released on Thanksgiving and is about having faith in complicated times.  Make sure to follow Janie May to stay up-to-date on all upcoming music!  You can connect with her via the following links:

When did you first realize that you wanted to be a musician and songwriter? Did you grow up in a musical family?

I always gravitated towards music and dance but was actually extremely shy about singing in front of others until I was almost out of college. I studied piano for about 7 years and ballet for about 10 but found the stress of recitals to be a bit overwhelming. However, I always found ballet class to be enjoyable because I felt connected to the music. I found it to be soothing and enjoyed the emotional expression that it offered. I would put on little keyboard performances for family from time to time and enjoyed creating melodies. Yet, while I found it easy to lose myself in the emotions of a song as a kid and would spend hours singing along to Mariah Carey and Christina Aguilera privately, I found it very hard to let my voice be heard by others. I started to dabble in writing lyrics my senior year of college and wrote and recorded some songs with a few different people in the following years but still didn’t really have an idea of what sound I was going for and felt like things weren’t clicking into place. I stopped writing for a few years after that, mainly because I felt a bit lost and was having a hard time meeting people to collaborate with that had a similar sound. I finally became inspired to write and release music more seriously after taking a songwriting course in 2016 and doing a few NY Topliner Camps starting in 2017. As far as coming from a musical family, my grandfather is a self-taught guitarist and played in some bands in his youth. Some of his cousins are also musicians and others were involved in making instruments back in Puerto Rico. Both my brother and mother can certainly carry a tune as well.

What can you tell me about your experience with NY Topliner Camp and how it has helped to nurture your identity as an artist?

NY Topliner Camp allowed me to connect with songwriters, producers and other artists. I felt discouraged at times in NYC because I felt like there wasn’t a space for artists and songwriters who were looking to grow and network. After spending years trying to find people who were in the same place, it provided a wonderful opportunity for me to practice writing and learn more about production and recording in an environment that felt fun and supportive. After the song that my team created during the first camp that I did received great reviews by the judges I felt that it was something that I could really do. Since people other than my family and friends were responding positively, I felt that I really had something to work with.

I felt inspired by and connected to the idea of finding one’s voice, both literally and figuratively. The journey towards self-discovery that she embarks on in the novel was also something that resonated with me. Like Janie Mae, I have defied categorization. I am of half Italian and half Puerto Rican descent, so I am kind of white and kind of Latina, but truly neither, and it was always hard for me to find a place where I fit in. I think my 20s were very much a time of finding myself and learning to trust my inner voice to guide me towards a life that reflected my values and talents. I felt very restless at times but I think it was because I knew that finding the right path would provide a sense of peace in knowing that I had figured things out to an extent. I think that her character had a very similar mindset and would not rest until she found that for herself.

You recently released your new EP ‘Balance Me’. What can you tell me about the EP and working with The Beat Disciples? In what ways did they influence the sound of the album?

The Beat Disciples were basically the engineers for the EP and oversaw the recording, mixing, and mastering. Zach Fuller was the producer of the original tracks and The Beat Disciples created the remixes of those originals. They definitely influenced the energy of the vocals and the vocal production.

You have said that when you started to write the album, that you were hesitant to see yourself as an artist. Why do you feel you were so hesitant and how has that perspective changed for you over time?

I am not an extrovert by any means, so performing is not something that has ever come naturally to me. I felt that I would be better off in the background where there was less pressure. Others, however, kept encouraging me to perform and kept encouraging me to see myself as an artist. As I began to see more and more people that I knew from the NY Topliner camp doing performances and putting themselves out there, I began to feel as though performing could be something that I could learn.

You have also said that while making the album, you were under a lot of stress and pressure mostly related to not having achieved certain life milestones as a woman. Have you felt that pressure in the music industry, as well? How are you using your music as a way to find your voice and strength as a 21st century woman?

I think that there will always be certain advantages to being young in this industry. However, when I was in my teens and twenties I did not have the wisdom and the amount of persistence that I do now. I am much better at following through with what I set out to do now and have come to realize that where there is a will, there is a way. I think the process of creating and putting out music has been very empowering for me, as it allows me to speak authentically and do something that is essentially very entrepreneurial.

I am very much an introvert so I tend to find balance by spending time by myself and reflecting on things. Lately I have been spending more time journaling and trying to meditate. Prayer is also something that helps me find peace and balance. I spent some time in my early 20s learning yoga and that is one thing that I have always found to be helpful. YouTube is also a great source for ballet barre videos, which has been an enjoyable and relaxing way for me to stay in shape during these times. Family is very important to me and time spent with them also helps me feel balanced.

What inspired you to film the 4 videos that were shot for each track? What was the process like, especially experiencing a pandemic?

The footage for the videos was shot on a Saturday in late July, using Brooklyn Bridge Park in DUMBO and Red Hook as our backdrops. We did the filming ourselves and then worked with video editors to put everything together. We initially met up to discuss concepts in the beginning of March right before everything started to shut down, but obviously that got delayed for a while as a result. We started to pick up the planning process again in the beginning of July and met via Zoom a few times to go over a general plan and some ideas. On the actual day of filming we really played things by ear and tried to find locations that would work well on camera. I am fairly camera shy so it took me a little while to get into the groove of things but once I did it was actually a lot of fun.

You have said that we were inching towards an election that will define a generation and will look towards the end of a pandemic that has brought so much grief and change and cannot imagine a better time to release these songs into the world. How do you see your music fitting into the landscape right now? What message are you hoping to convey through your music?

I think hope and unity has become the main message that I want to convey through my music. I see ​Some of These Days​ as a fundamentally hopeful track, albeit one that also conveys a lot of frustration and angst, feelings that are certainly relevant during these times. Similarly, I see Balance Me​ as a song that can be interpreted as a plea for change and a return to normalcy.

I will be releasing a single on Thanksgiving titled “Not Alone”. The idea for it came to me the night before we filmed the videos for the EP release. It is essentially about having faith in complicated times and staying persistent even when feeling a bit abandoned by God or feeling like a bit of an outsider within the context of organized religion.