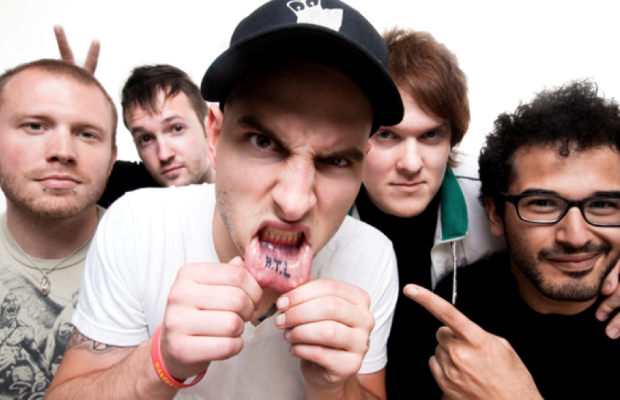 I understand that you’ve entered the studio to start on your third record not too long ago. Was there a different direction that you aim for in the new record?
Yes, definitely. The genre that we’ve been a part of for the last few years has been overdone and just run into the ground. We felt to stay relevant as a band and as musicians we needed to push ourselves and make songs that are still very much HTL, but push the boundaries of what our band is known for. We’re growing, I think our fans are too. Nobody wants the same record over and over again.

You haven’t returned to the studio since your Coast To Coast EP. What was one thing you missed most about being in the studio, in the time that you weren’t?
We’ve always been a band that loves to be on the road. We took time off the road this past year to write the record and that’s what sucked the most for me. I missed playing shows and hanging with friends, seeing new places and just being busy. As far as this record goes, we just wanted to write the best songs we could, record with a producer we felt could take us to that next level, and get back on the road. As far as missing anything in the studio, the only real thing I enjoy is hearing that song come together, seeing songs take shape or transform completely from something it was before. That’s always fun, but yeah, get me on the road, I live in OHIO – I wanna get on that stage and sweat with people. I mean that in the most erotic way possible.

What’s one theme that’s the most present in your songs?
In most of our past material I always think that there’s a certain bite or edge in a song. Something a little darker that prevails through the pop elements we play. Whether it be in the lyrics or the riffs, I think there’s always something a bit edgier. In the new material all the songs are a lot darker in general. We have songs that will be very atmospheric and we have songs that are very heavy. Not in the sense of double bass and screaming – but heavy in a big, open epic sense of the word. We’re going for epic. It’s a very logical step for us.

I presume that the tracks you collaborated on with Ryan Key of Yellowcard and Kenny Vasoli of The Starting Line will be on the new record, yes? Can you tell us a little about them?
We actually got the opportunity to write with a few different people that we loved and respected. Ryan and Kenny were definitely two of them that we had a blast with. As far as songs being released, we wrote SO many songs for this record trying to find the next step for this band and, while it was fun writing with those people, a lot of those songs didn’t hit on the vibe and mood we were going for. You may hear the song we wrote with Ryan called “Faster Now” on the new record, besides that, I’m not sure if the others will see the light of day. Sorry!

What was the first instrument that you picked up? What was the first song that you learned?
The first instrument I picked up was the guitar. I wanted a new pair of skates for my birthday and my fucking parents had the nerve to buy me an acoustic guitar. I was like, “Why the fuck did you get my a guitar? The ONLY thin I even mentioned was skates.” and they were all like “You love music, you’re going to do this, we got you lessons.” Fast forward to a few years later and I dropped out of college to tour in a pop-punk band and they were just banging their heads on any solid surface they could find. I owe all my success to my parents pushing me into it, it all worked out and I’m a better person for it. Thanks Mom and Dad! The first song I learned was “Come As You Are” by Nirvana. Pretty standard stuff.

I understand you had some label issues and that’s partially why the new record was delayed. Are all issues resolved?
The issues are all resolved now. It was a very, VERY frustrating time for our band. Coming off of a label like Triple Crown Records, where Fred is a very artist friendly label head who lets the bands do what they want to do, and then going into this major label environment where you are compared with every artist that is doing well on the radio – it’s easy to lose sight of who you are and what you do. We got into the all-too-common situation of being told “keep writing and be yourself, but here’s a ton of bands doing well at radio that you should probably think about”, and we ended up just trying to write songs to try and appease whoever can give us the green-light for the record. We were stuck for a while, writing songs no one was happy with, just trying to get a record started. Thankfully some new people came into the picture and we were able to leave. We found a label that got what we were trying to to do with the new songs and now we get to be in the studio with some amazing producers making music that we want to.

While starting out the band, what goals did you have in mind? Have you accomplished them yet?
Hit the lights started out as a bunch of Ohio kids that just wanted to get out of the farmland and play some VFW shows to a hundred kids every night. We have more than accomplished what we set out to do and we’ll take this as far as it needs to go. It’s been an incredible ride that has shaped us as people, allowed us to see different sides of the world and made us really happy. I’m looking forward to many, many more great years.

If you could have given yourself one piece of advice before stepping into the music industry what would it be and why?
Realize what you can do yourself without the help of labels/management/booking agents and do as much as that by yourself as you can. The internet is an incredible tool that I feel is starting to truly be tapped for self exposure. Use it and work harder than everyone else.

Can fans expect some new material by fall 2011?
Fuck yeah, they can.