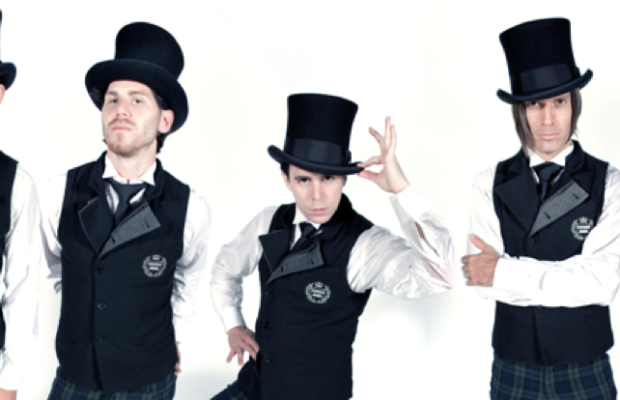 SS: You guys always put on such a dynamic, high- energy, unique show. Is there anything you do before you play that gets you amped up?
Chap Stique: We usually watch Rocky IV, feed ducks, and play red-rover. From time to time, our schedule doesn’t allow it, so we just watch Xanadu play video games. Once, we drove the van in circles while trying to play Jenga. Fatty won, so we never played again.

SS: Imagine we’re on twitter right now. The trending topic is #tourstories. Give us your own #tourstories!
Chap Stique: Several years ago, Soul Glow Activatur (our lead singer) introduced me to a Jacksonville crowd by saying that I was really good at drawing dragons. The truth is, I can’t draw anything…not even circles or straight lines. After the show, an astonishingly southern girl walked on the stage with the biggest marker I’ve ever seen in my life. She yelled in the harshest of voices, “I got two huge arms and I want dragons on both of ‘em!” I told her to close her eyes while I drew the crappiest two dragons of all time. I tried to lightly feather the marker while I was drawing it so she would imagine that a masterpiece was being made. When she opened her eyes, she yelled, “This is AWESOME!” There might’ve been a few explicative in there, but I didn’t think I should repeat them.

SS: Any albums that have been on constant rotation for you lately?
Chap Stique: I can’t stop listening to Paper Route’s Absence album. It’s magical, and so is Ultraviolet Sound’s new stuff. I’m also really into From Below by Edward Sharpe and the Magnetic Zeros. Sea of Cowards by The Dead Weather and Treats by Sleighbells have been playing on my iPod pretty regularly, as well. Although it’s not the newest record in the world, Season of Poison by Shiny Toy Guns is still blowing my mind. However, I’ve mostly been listening to old stuff like Simon and Garfunkle, Jimi Hendrix, The Police, and Yes. I just moved, so I listened to a ton of music while I was sorting and arranging!

SS: What are the best and worst parts about touring?
Crouton: The best part about touring is when you get 2 play and you see that one kid out in the crowd that knows every song by heart and doesn’t care what anybody thinks of him or her and just sings 2 the top of there lungs … I was that kid. the worst part about it is being away from your family for a long time.

SS: What’s the writing process like for the band?
Nadaddy: Our writing process can start many different ways. Sometimes it begins with nothing but a beat lyrical hook, and other times we start cold with a simple concept and the song just writes itself. We continue to massage the songs and rewrite until every time we hear it we’re jumping up and dancing. If we aren’t freaking out about it, then we just keep working, or move on to something else. For this upcoming record, we have taken more time off and have been able to focus more on perfecting each track we’re working on.

SS: Which do you prefer more: writing songs or playing shows, and why?
NaDaddy: I think a healthy balance is the key here. When we spend too long playing shows, we start to miss the creative side, and vice-versa. This year I think we’ve hit a nice balance of both. We’ve scaled back the number of live shows we’ve played this past year with the intention of using that time off to work hard on the next record. As a result, we’ve been able to work at a smarter and more efficient pace during the writing process. We’ve been able to write a song, let it breathe, come back to it, and then rewrite it to make it better. As for the live side, we’ve been able to step our level of stage production this year as well. Our live show has always been our jewel and it’s important to us that we always raise the bar each year to give out loyal fans the most exciting and memorable experience possible.

SS: How is The Pageant Tour going so far? What made you want to do a Christmas-themed tour?
Nadaddy: The Pageant Tour has been a huge success already. All the fan response has been overwhelmingly positive and we have some great bands out with us right now. All the VIP’s dancing on stage with us, the costumes, amazing Christmas songs, I couldn’t be happier. Last year we were all resistant to even doing a Christmas album in the first place, but as soon as we started working on it, all those apprehensions went out the window. It’s been so much fun to actually play a version of a Christmas song you’ve heard all your life in a way that we actually want to hear it! It’s given all of us a fresh look at some great songs that sometimes get lost in the repetition of having to hear them each year. We love it!