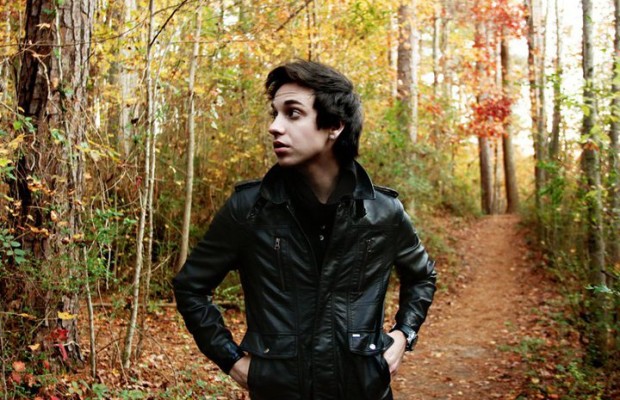 How old were you when you became interested in music? Do you believe that your music career will take you far in life?
I was about 5 when I started begging for a drum set or a guitar, My parents got me a guitar from a family friend and I learned the whole third eye blind CD. It was the greatest exploration in my life next to bubble tape at the time. I believe my music career already took me where I want to be, All I ever wanted was to write a song and know that people actually listened to it, and now that there are amazing people writing me emails about how my music has changed / helped them in their path.. that’s completely fucking insane to me. I am so blessed.. I hope things continue to roll, but if everything stopped right now I would be content knowing that there are people who love me for my art. It’s beautiful & moving.

If you could listen to only one album for the rest of your life, what album would that be?
Still Third Eye Blind… Or Acceptance: Phantoms, Death Cab for Cutie: Plans, Kid Cudi: Man on the Moon, or Coldplay: A Rush of Blood to the Head.

You refer to your fans as “cubs”. Where did the nickname derive from?
I sometimes take on the alter persona “Blackbear”. Sort of a nickname, so I call my fans my cubs, cause I love them like my family.

Who is your biggest inspiration, and how have they inspired you?
Everyone inspires me, I’m easily influenced by people, movies, art and expression. My mom plays a big roll she’s a heavy supporter, my Dad plays a big roll, he’s not so much a supporter until recently. God, God concepts, spirituality, every hater & girl who did me dirty, waking up on rainy days, waking up cold, good coffee, classical/jazz vocal blend music, good vibes, solid people, trust, distrust, good books, good food, strangers, a smile from a stranger, drugs, conversation mainly. I talk to a lot of people and I’ll stop in mid sentence and be like.. “I’m gonna write a song about that.. ” . Pretty much anything genuine or real. Real recognize real.

How do you feel about your fans coming together and making you something as great as an appreciation book for you?
Like I said, my fans are my family. I might make a cub appreciation book and let all my fans bring something to the shows and sign it, then get it printed and sell it. Sometimes I just stop and feel like crying because I’m so blessed and I worked so hard, but I still feel undeserving.

Your recent exposure on Tumblr has helped you gained a larger fanbase. Did this sudden gush of attention surprise you?
I was super surprised. Tumblr is my favorite website! I wake up and read it like it’s my newspaper while I drink my coffee and reblog a million things. I’m so stoked people appreciate the things I like. I’m looking for some new awesome blogs to follow so if you have a tumblr and you are reading this, message me and let me know!

When you began making music, what goals did you hope to achieve?
I hoped to play a big festival where I would sing a song and stop in the middle and the crowd would just applaud, that was my visual dream going into this. I hope to achieve that one day.

Thanks for the opportunity Mat! Can you tell us anything about Year of the Blackbear?
Year of the Blackbear is being mixed and I’m working on a release date right now, its a 4 song EP, full band. I love love it so much, my favorite material coming out. I’m also gonna give away each individual song before it drops on iTunes, because I believe music should be free to everyone. If you decide to get it on iTunes and support me, then you’re the shit and I love you and I appreciate it so much! I hope you guys like it. It should be coming out early June.
Thanks for giving me the opportunity to further explain my existence. Means a lot! PEACE LOVE TOGETHERNESS UNITY SWAG.