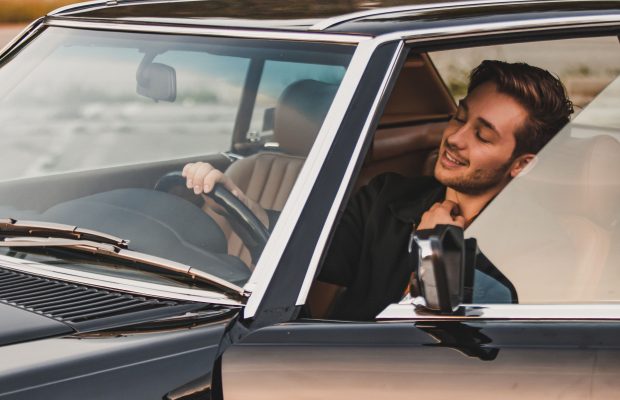 The self-motivated and self-taught Christian French has learned a lot in the few years since he published his first single “Fall For You” on Soundcloud. Instant success launched the one time med student and hockey player from Indiana on a wild ride through the music industry. When we spoke to French, he told us how he first connected with his manager when they reached out to him on Instagram.

“They DM’d me and said that they’d love for me to come out to L.A and make a song out here. I went and we made ‘Love Ride.’ That was the craziest first trip ever.”

That put French on everyone’s radar. He’s currently on tour with Chelsea Culter after touring with Quinn XCII earlier this year. He signed with Disrupter Records (joining a roster alongside the likes of Dove Cameron and The Chainsmokers), collaborated with Hoodie Allen, and put out several EPs. Now, French is ready to embark on the next chapter of his career by going on his first headlining tour.

After seeing French open for Quinn XCII, I can’t wait to see what he does for a whole set. Considering how he commanded the audience’s attention during that show, it surprised me to learn that French didn’t have any previous performance experience.

“I had done a few coffee shops like open mic night stuff, but it was so bad.”

French described his first performance as someone pressing play on his Spotify tracks and him singing along like it was Carpool Karaoke. Flash forward to Chelsea Culter reaching out to him and French taking the stage for the first time with a full production team.

“It went great,” French said. Then he shrugged. “Well, looking back, it probably wasn’t that great, but I’ve been getting better.”

This happy-go-lucky attitude is something that delights me about Christian French. He has a positive energy and an openness to every opportunity that makes him something special. He’s just nice to be around, not to mention great to listen to.

So I wasn’t surprised when I got an email months after our first meeting announcing that he was going to be headlining a tour this fall for his new album bright side of the moon (a confirmed Pink Floyd reference). French is a charming go-getter and this tour is the obvious next step in his career.

“I’ve learned so many things that I’m going to take with me,” French told me over the phone when I asked if he learned anything from his time as the supporting act. “I sat there during the Chelsea [Cutler] and Quinn XCII sets taking mental notes of what they were doing, taking note of things I liked to see and what I can bring into my show. Also just by being on the road, I’ve really learned how to handle myself on tour.”

French went on to tell me how he’s learned a little bit more each time he’s gone on tour. He explained that he’s had to learn to let go of little problems and find a way through the tough days on the road.

“You can’t bring that energy to stage,” he said. “Performing is a good way to get those stupid things out of your head. Stuff that really isn’t a problem, but you’re just most likely being a little bitch about.” This made me laugh, because I understand exactly where he’s coming from.

“A lot of the inspiration for bright side of the moon is about focusing on the positive of a situation. Stuff like ‘those fans didn’t enjoy set like the last one.’ It’s important to not put yourself in those self-inflicted harmful situations.”

The transition from opening to headlining isn’t always easy, but French is thankful for Cutler and Quinn XCII, who showed him nothing but support on the road, and he plans on bringing that same positivity to the artists he’s bringing with him.

“I want to pay it forward,” French said. “ASTN, who is opening for me, is one of my really good friends. It’s really cool how we have this whole in-house team going on tour together. It’s hilarious, because we’re all best friends who get to go hang on a tour van for a month together. ASTN isn’t just a random pick up, he’s part of the team. It’s been thought-out for awhile, so of course I’m going to support him as much as I can.”

The fall tour starts on September 4th in Ann Arbor, MI and ends on October 7th in Houston, TX. French gave me a taste of what to expect.

“I’m throwing it all in there. It’s gonna be old, it’s gonna be new, it’s gonna be shit that hasn’t even come out yet! We’re stripping it down for some songs,” he told me, clearly filled with excitement.

From bombing at open mic nights to headlining his own tour, Christian French has already come a long way, and I believe that this is just the beginning.