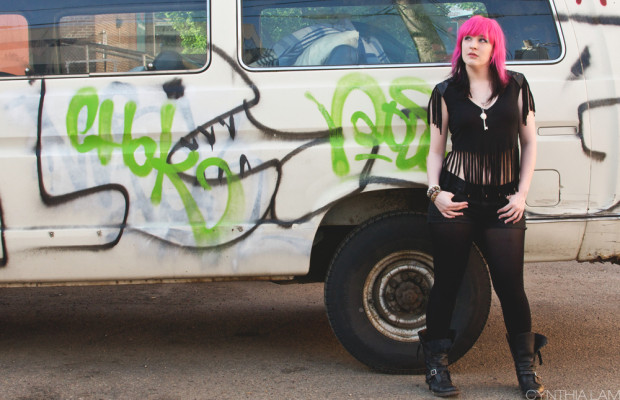 How would you describe yourself in one word?
STRANGE!

What’s been the hardest part for you as a musician?
I think just having to motivate yourself every day to keep pushing and pushing and pushing. It’s a fun job, but it’s also a lot of hard, back-breaking work and a lot of rehearsing the same thing over and over. Guitar scales and vocal exercises. Even the best players in the world still practice the basics day in, day out. I’ve gotten a lot of crap from people over the years – people telling me that I’ll never make it, that it’s pointless to chase such a far-off- dream, and motivating yourself through that and keeping positive can be really tough and painful at times. I’ve been kicked out of a band for not being a good enough vocalist and then my other band split up because the guitarist wanted a solo career which really sucked, but I think this is what they call “paying your dues”, ha ha.

If you weren’t in the music industry as an artist, would you still want to be in the music industry as a song writer or anything else?
Man, I’d make a terrible band manager. Ha ha! I think I would love to write songs for other people, that would be pretty epic. I could see myself doing photography, or music journalism. Something that expresses my creative side. Still, I think if I hadn’t decided to chase my dream of music, I would’ve probably ended up in med school!

What’s the best advice you can give to any other upcoming artist?
Believe in yourself. Work hard every single damn day. Both of those are just as important as the other. Just never stop trying, take every opportunity you can, and don’t let people drag you down, because there will always be someone who wants to do just that. It’s your dream, man – grab it with both hands and don’t let go!

How long have you been writing songs?
The first song I ever wrote was when I was three. I formed a “band”, quote on quote, with my neighbour and best friend, and we had two original songs for which we wrote melody, lyrics and a drum beat (my little kiddie’s drum kit was the only instrument we had). I used to write lyrics and melody only in the two “real” bands I was in, but now that I’m independent I’ve been writing everything myself since last February or so.

What’s one of the first songs you wrote?
Well, the first song I ever wrote was when I was three. It had verse, chorus and bridge – pretty impressive for a toddler! But the first “proper” song I wrote, after I moved to Canada, was called “Nervosa”. It was a hardcore punk song about an eating disorder, and went through several different versions before I just wrote my own chords for it.

How do you think your writing has improved since that song?
I think I have a better grasp of song structure now, and how to write catchier stuff. The great thing about songwriting is that I’m constantly improving!

Who are few musical inspirations that you think people might be surprised by?
I’m really digging Depeche Mode, have done since I was a little kid. I love how deep their lyrics are, and their melodies and music are proper catchy. I love Queen, I loved Freddie Mercury. He was a legend. I was also a big fan of Michael Jackson’s music, and David Bowie.

If you could go on tour with band/artist in the world who would it be?
Hmmm, I know that I would LOVE to go on Warped Tour. But I think if I had to choose one band I would say My Chemical Romance. We seem to have a lot of the same hobbies and interests… Touring with any of my favourite bands would be an honor, though.

You have a very lovely style. Where are some of your favorite places to shop?
Oh, thanks, mate! Honestly, I don’t really have any “go to” places to shop… I usually tend to wander up and down Granville and Robson Streets in Vancouver and see if anything catches my eye. It’s pretty crazy what some of the vintage stores and independently owned places carry, and it’s always more fun than hitting up a big chain store. In England I used to like to shop at H&M (it’s just not the same in Canada) and this store called One Legged Jockey.