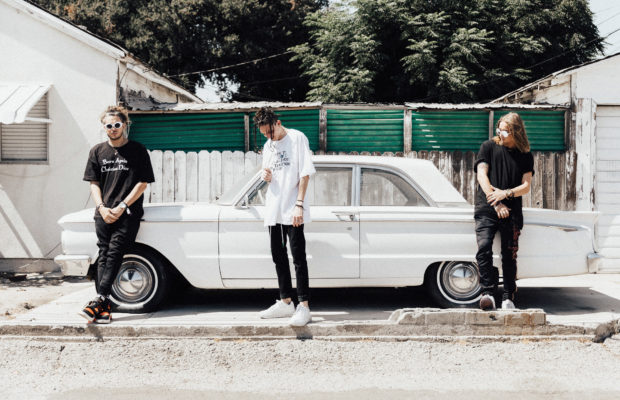 Australian alternative/indie rock trio Chase Atlantic have been creating a buzz in the industry and continually growing their fan base since their formation in 2014.  The band writes, produces, sings and plays the instruments in all of their songs, stating that for them, production is the most important thing and the most critical element of creativity.  Consisting of brothers Mitchel and Clinton Cave (vocals/bass and lead guitar/tenor saxophone, respectively) and Christian Anthony (rhythm guitar/vocals), the band released 2014’s Dalliance EP and 2015’s Nostalgia EP before catching the eye of Benji and Joel Madden of Good Charlotte, who signed the band to their management company MDDN.  Already enjoying a growing popularity and fan base, their signing with MDDN propelled them even further into the limelight.  In 2017 they released three successive EP’s, Part One, Part Two and Part Three followed by their first tour in the US as support for Sleeping With Sirens.  The band released their first studio album, Chase Atlantic, before heading out on tour.  The band has also toured with Lights, performed on Warped Tour, done headlining tours and headed out with Sleeping With Sirens for a second time for the band’s European Tour.  Throughout their years as a band, the trio have enjoyed a growth and evolution in sound, ranging from their early rock sound, to alt-pop and more R&B and Hip-hop influences.  Chase Atlantic recently released their latest EP DON’T TRY THIS.  Staff writer Emily May recently spoke with the band by email and discussed their growth as a band, their new EP, signing with MDDN and what’s next for the band. You can follow the band and stay up-to-date with all upcoming music and tour dates via the following links.  You can checkout the lyric video for their latest single below.  Photo credit:  Jordan Knight.

You were signed in 2015 to MDDN, Benji and Joel Madden’s music company and have toured with them!  How has that experience been for you?  They have been in the industry for many years at this point.  What have you learned from them about the industry, touring and being a band?  Have they given you any especially meaningful advice?

They really helped us progress and grow into the more mature artists we are today. We came to LA with very little contacts, and without them I’m not sure we would be in the position we are today. They encouraged us to get over to the states more often, provided us with a studio, and helped us look for accommodations. As well as mentors, they have also been older brothers to us. They welcomed us into their families and lives with open arms and have played a huge part in the past few years. They also taught us to always be humble and appreciate the people around you, whether that be the crew or the bands you tour with.

You’ve mentioned that your live shows are more of a rock show and that it’s important for you that people leave your show feeling like it was the best show they’ve seen!  Do you have any pre-show rituals?  How do you feel that your live shows have evolved over the years?

We kinda started out as an alternative rock band, so live we have always preferred the full-band set up for a more dynamic performance, as well as a more enjoyable atmosphere for our audience. We only truly started touring full-time in 2018, so to look at how far the shows have come from January-December is pretty insane. Lots of practicing and experience: that’s the best way to advance your live performance. There’s no use sitting in a rehearsal room for years if you don’t have the experience to deal with on-stage issues you won’t find in a safe environment. Plus, more production gets added to the show with each tour, so you never feel like you’ve seen the same show twice.

You’ve had a lot of writing sessions since moving to LA.  What have those sessions been like for you?  You’ve learned to become not only artists, but producers and writers for other people, as well.  Do you find it more challenging to write and produce for others than for yourselves?  Have you worked with anyone you were especially excited about?

We have always been producers before coming to LA. The first music we ever released was all done in our bedrooms in Brisbane. We have found in sessions it’s more us helping other artists or other writers learn, which sounds very arrogant but it’s true. I would say it’s always easier for us to write for ourselves, But, if an artist comes in with an idea of what they want and they’re confident writers, it makes the process for writing for them a lot easier.

You have said that, with regards to your move to LA, that there’s a glass ceiling in Australia with how far you can take your music career and that you didn’t want to become one of those Australian artists that gets trapped.  What kinds of opportunities do you feel have opened up for you in LA that you may not have otherwise received?

Australia has 1/10 of the population of America to begin with. It’s also on the complete other side of the world to places like the U.K. and Europe, which are also huge markets we have always wanted to travel and play to. The Australian music industry is very niche. Lots of very cool bands coming out of there like Sticky Fingers and Ocean Alley. But, a lot of the times bands sign in Australia and the music never makes the impact in places like America and Europe that it does in Australia.

You’ve previously collaborated with US rappers iLoveMakonnen and K Camp.  Are there any specific artists going forward that you are hoping to collaborate with?

We would love to work with Tame Impala, The Weeknd, and Travis Scott.

Who are you guys listening to right now?  Are there any artists you are excited about currently?  Do you make playlists to listen to when you go on tour?

It always varies per record I guess. Right now, lots of Travis Scott and Young Thug.

Since starting out, Chase Atlantic has had over 80 million global streams and have racked up over 1.1 million monthly listeners on Spotify, not to mention the countless shows you’ve sold out!  Is it ever surreal for you to think about how far you’ve come as a band?

It’s always nice to sit back and reflect, but we have had such a busy year of touring and traveling that it hasn’t really hit us yet.