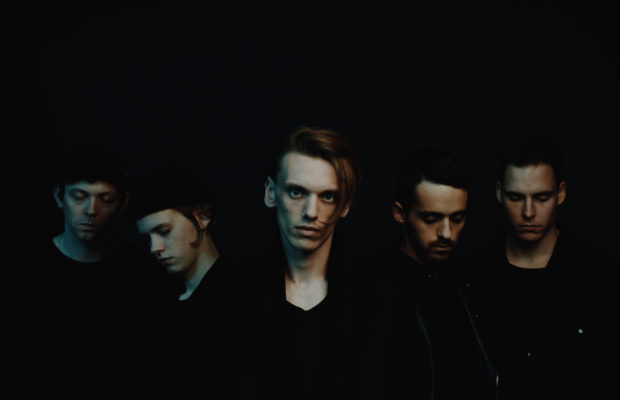 UK punk band COUNTERFEIT is on a mission to travel and rock stages around the world.  Consisting of lead vocalist/guitarist Jamie Campbell Bower, guitarists Sam Bower and Tristan Marmont, bassist Roland Johnson and drummer Jimmy Craig, the band is currently in the midst of their first US tour.  Having signed last year to Xtra Mile Recordings, they subsequently released their debut album Together We Are Stronger and have been garnering plenty of buzz ever since, wowing audiences with their energetic and powerful live performances.  Along with being the title of their debut album, “Together We Are Stronger” also serves as the band’s motto as they strive to convey the message of acceptance and unity through diversity and difference.  In order to write their upcoming sophomore album, the band moved into a house together in England and totally immersed themselves in the process, their goal being to work a steady and cohesive pace.  The band has a PledgeMusic campaign set up to help fund the new album, with a variety of prizes being offered.  With a passion and drive for making music, performing, and evolving as a band, COUNTERFEIT will no doubt achieve their goals of continuing to tour the world and play to bigger audiences worldwide.  Our staff writer, Emily May, recently interviewed singer Jamie Campbell Bower via email in which he discussed the band’s first US tour, the band’s message of “Together We Are Stronger”, the recording of the next album and the importance of their live show.  You can stay up-to-date with the band, as well as upcoming tour dates and album information, on their website here, Facebook here, Twitter here, and Instagram here. You can stream their music on Spotify and Soundcloud.  You can contribute to their PledgeMusic Campaign for their upcoming album here.

EM: COUNTERFEIT is in the midst of it’s first US tour! What are some highlights so far? Have you had the chance to explore any of the cities you have played in and, if so, have you found any favorite restaurants, record shops or other spots?

Jamie Campbell Bower: Endless drives. Having only been to a few parts of America before we’re loving getting to see more of this country in all its glory. We stopped in Memphis and hung out for a bit and that was good times. Philly is also killer. Luke’s Lobster does good things with shellfish and bread.

EM: I read that for the band’s debut album, Together We Are Stronger, you wrote the lyrics and then sent them to your band mates to “color them in and make them whole”. Are you the primary songwriter for the band or, in having a lot to get off your chest, was it just specific to that album?

JCB: Lyrically the songs are primarily written by myself but the musicality of the composition is shared. I tend to write music first so on album one as I was working, I’d send off sections of song to gauge response and then continue if the guys were into it. Then we’d get together and continue to develop the material. The lyrical content is a more personal affair though as I tend to be more introverted and self reflective. And yes I got more than enough that I needed to exorcise before I’m done.

EM: You guys moved into a house together to work your sophomore album. How has that experience been? Have you learned anything about each other that you didn’t already know, living in such close quarters?

JCB: Intense, immersive and something that hopefully we’ll look back on as a defining moment of this band. When we tour we live together whilst being on the road so there was nothing that truly shook us to our core that we didn’t already know. We’re family. A dysfunctional, weird, loving, family.

EM: The band set up a PledgeMusic Campaign to help fund the next record. How has the response been?

JCB: Nothing short of phenomenal. Honestly we didn’t expect such a response. We’re so stoked that we get to share in the album process with people. We’re gonna be sharing things on pledge that normally you don’t get to see and hopefully bring people into the making of our next album and share in that together.

EM: I read in an interview in which you said that being a musician has helped you to make peace with who you are and that it’s ok to be a weirdo and an outsider. Can you talk a bit about what that journey has been like for you?

JCB: My journey has had its twists and turns. I’ve had my share of darkness and of pain but throughout it all music was there. It was my place to go to, to be free. In music I could let all those things go that I’d otherwise suppressed or felt like I couldn’t share. In music I find like minded people who truly feel. In music I can be me free from judgement.

EM: Could you talk a bit about your band message of “Together We Are Stronger” and how it originated?

JCB: Our message of unity and of community is what we’re founded on. For each of us we have seen and know how important it is that we support and stand together in this world and that’s what we’re all about.

EM: You guys put a lot of focus and energy into your live show. What is the importance of the live show to you? Do you do anything special to prepare to take the stage each night?

JCB: The live show is everything to us. There’s really no other way to put it. It’s where I feel most at home. We have our pre-show rituals but those are secret but nice try.

EM: Besides being a musician, you have also modeled and acted. Have you found it challenging to balance your time in the past to accommodate all of these things? Do you have any acting/modeling plans going forward or are you mainly focused on the band currently?

JCB: I wouldn’t say challenging. The band takes a lot of love, as we built this shit from the ground up from day one and it takes a lot of care and attention, but I’m still able to pursue the other creative outlets that drive me for sure. I think that those closest know that I’m somebody who has a burning desire just to be creative and creativity takes many forms. In both the fashion world and film I’ve been fortunate enough to work with some amazing people and I have a few things coming out later in the year. But like I say the band takes a lot of attention.

EM: You are playing a couple of US Festivals in May- Carolina Rebellion on May 4th and Northern Invasion on May 12th. Are these your first US festivals as a band? What are some other US festivals on your “must play” list?

JCB: Yeah these will be our first US festivals. In fact, I am currently traveling from Carolina Rebellion today, having had a total riot at yesterday’s show. We’d love to hit up Rock USA, Rock on the Range and, if Woodstock was still going, we’d be there but alas.

EM: You guys released your first album just over a year ago and have accomplished so much as a band! What are your goals going forward and what’s next for the band?

JCB: Next up is Album 2, pretty much immediately when we get off the road. And then we wanna continue to take this traveling circus across the world. Big goal? Main stage headline at Reading and Leeds festivals back home and headlining Hollywood Bowl and Madison Square Garden on the same weekend.

Check out the music video for “You Can’t Rely” below: