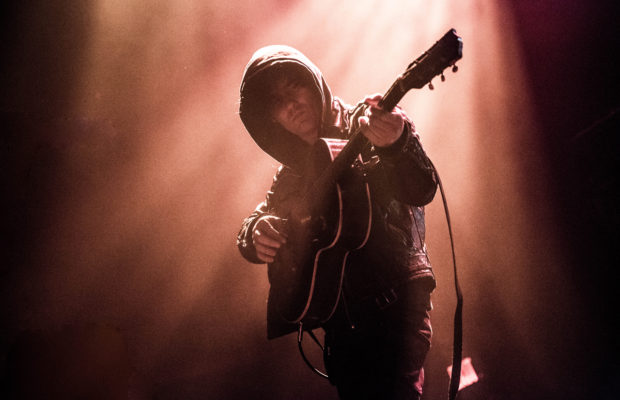 On the night of what was perhaps the most monumental election in American history, indie rockers Death From Above 1979 and Black Rebel Motorcycle Club played to a nearly sold out Terminal 5 and they brought along bad-ass female rockers Deap Vally to open the show.

While everyone was pre occupied checking their phones, refreshing Google every 30seconds to get live updates from the polls, Los Angeles rockers Deap Vally took the stage to serve up some fresh badass-ery. Donned in stars and striped bodysuits to celebrate the occasion, the band played an invigorating set filled with songs like “Smile More”, “Royal Jelly”and “Little Baby Beauty Queen”. These ladies demanded attention and they received as fans throughout Terminal 5 began to lift their heads from their phones as Deap Vally performed a show for the ages.

The cloth dropped and the infamous cutout of the elephant heads was perched on the middle of the stage, letting everyone know that Death From Above 1979 was coming. With a rather simple stage setup of a drum kit and a clear bass, the duo graced the stage. Their lengthy setlist was a true rager, filled with hair flips and drumstick tricks. DFA 1979 kicked off their show with “Always On”, followed by their hit “Right On, Frankenstein!”. While the band attempted to shy away from political talk, drummer and vocalist Sebastien Grainger thanked fans for coming out on such a special night. DFA 1979 continued their killer set with songs like “Black History Month” and “Trainwreck 1979” before concluding their set with “The Physical World”.

The final band of the night was Black Rebel Motorcycle Club, who made perhaps the most subtle yet poignant political statement of the night. As stage techs rolled out the drum kit and prepared mic stands, the most striking aspect of the stage setup was the flaccid Donald Trump mask with the word “Cunt” across the face. The band played tunes including “Beat The Devil’s Tattoo” and “Ain’t No Easy Way”. With little to know stage banter, the band meant business and performed a jam packed setlist that surely took the audience’s mind off of the night’s roller coaster of events.