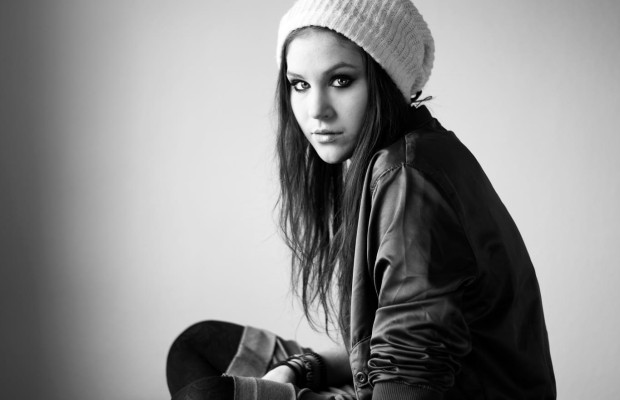 Your name is Charlotte Eriksson but you also go by the Glass Child. How did you come up with that moniker?
The Glass Child comes from when I was younger. I was a quite observing and quiet kid, and I never really trusted anyone. People said that it was as if I was living behind glass – they could see me but never really reach me. When I was 14 or 15 I wrote my first song and it was about that and my inability to let people in and was called the Glass Child. I feel comfortable behind the name now, I think.

Did you always want to be a musician or was there a certain person or moment that pointed you in that direction?
No I got into music very late, like around 14, 15. Before that I barely even listened to music. But when I “discovered” music and how it could make troubles, weaknesses and even pain into something beautiful, I was just hypnotized. The feeling when you hear a song, and it feels like everything is exactly the way it’s supposed to be. Those words together with that melody makes even the most broken thing into something beautiful. That’s what got me hooked, and I knew I wanted to spend my life creating those moments.

What made you move from Sweden to London at the age of 19?
First of all I wanted to live alone with my music. I needed to leave Sweden and my memories behind in order to become who I wanted to be. But also, because you can’t dedicate your life to music the same way in Sweden as you can in London. There are no venues for smaller bands where you can play, and no one really cares about art that much. In London there are venues everywhere and you can play every night if you want to. And there are artists and songwriters from allover the world here, and everyone are so passionate about their art and they believe in it so hard. It’s just really inspiring.

What was it like writing and recording This Is How Ghosts Are Made? How did you go about choosing what songs went on the EP?
I write songs all the time so when it came to just choosing 5 songs it was definitely hard, but I wanted to have 5 songs that represented this year in London. Everything I’ve learned, felt and who I’ve become, and I really think that those songs reflects exactly who I am right now. I’m really proud of this album and I’m so excited to let people hear it.

How and why did you go about starting you own record label, Broken Glass Records? What, if any, challenges have you faced as a record label owner?
I decided to start my own record label because I want to have 100% control of my music and my carreer. I don’t ever want to compromise myself, and this way I can do everything in my way, the way I want to do it, without anyone telling me what’s good enough or not. It’s definitely the hard way to go since there’s a lot – a lot – of hard work, and it really takes dedication to get your music out the same way a bigger label can, with expencive marketing-campaigns etc. But it’s definitely worth it. And I’m learning so much every single day by doing everything on my own, and that also makes me appreciate every little ashievement so much more since I know I did it all on my own.

Do you feel that running your own record label helps you to understand the industry side of the music business more?
Absolutely. I’ve been forced to learn everything as a go and I’ve made a lot of mistakes, but I’m learning every single day. I think the way the industry looks today, it’s important to understand everything that involves in being an artist. Everything from the recording/ producing-part to the whole business part. Otherwise your losing pieces of your art in all those people that have to be involved, and my music means to much to me for that.

You self-produced your first EP. Did you do the same for This Is How Ghosts Are Made? If so, why not use outside help?
I did yes! Except for one track, Best Part Of Me, that I produced together with Jason Wilcock, who’s produced bands like You Me At Six and We Are The Ocean. I loved working with Jason, but I want to produce most of my music myself because when I write, I have such a clear image of how I want it to sound. The production is just another way for me to express myself and the feeling and I’m trying to create. I really enjoy the whole producing and recording part and I’ve learned so much by doing it myself.

How would you describe your sound to someone who has never heard any of your songs before?
Ah this question is so hard. All my song are so different, some are raw and acoustic and some are bigger alternative pop-ish. But I’d say real, honest, raw and maybe a bit cinnematic.

Are there any cities or countries you haven’t visited yet but would love to play in?
Oh there are so many! I was in New York a couple of weeks ago, and that was just breathtaking. My biggest goal right now is to go on a tour in america next year, and hopefully some festivals in Europe too.

What’s the biggest obstacle you’ve faced during your time as a musician?
I think the longer I do this and the more I ashieve I prove people wrong, but the hardest part is when people don’t believe in you. When I moved to London and said that I wanted to spend my life doing music, a lot of my closest friends and family laughed at me and just thought I was immature and a naive dreamer. But I think I learned somewhere on the way to see that as motivation instead, and fight evern more to show them what you’re all about. But opinions are always hard and everyone’s got them.

If you could give your younger self a piece of advice about being a musician or the music industry in general, what would it be?
I’d say, don’t turn to the industry or “professionals” asking if you’re music is good enough. You’re not writing music for them, and they haven’t been what you’ve been through and they can’t relate to it, that’s why they’ll reject it. Instead, turn to the real people, those who are like you and can relate to your music – your real fans. The industry “experts” aren’t the ones you want to spend your time on, your fans are. The industry won’t be there for you in the end – your fans will.

What moment in your history as a musician are you most proud of?
Probably when I reached #2 on the swedish Itunes-chart with my song “I Will Lead You Home” in September. That was just mindblowing. I released it as a charity-single for the cancer- organization “Young Cancer”, and all the money went straight to the organization. I’m really proud of that.

You’ve accomplished so much at such a young age. What’s next for you?
My next aim is to go on tour, and just hopefully tour all next year for as many people as possible. I also want to get involved in more charity-projects, and then hopefully release my first full-length in the end of next year. But first my second EP “This Is How Ghosts Are Made” December 5th!

Anything you’d like to add?
I’m giving away my first EP for free at
www.noisetrade.com/theglasschild, and don’t miss my new EP in December. Also, I’m answering every message/ tweet I get on tumblr , twitter and facebook so come and talk to me! www.twitter.com/justaglasschild, www.facebook.com/theglasschild