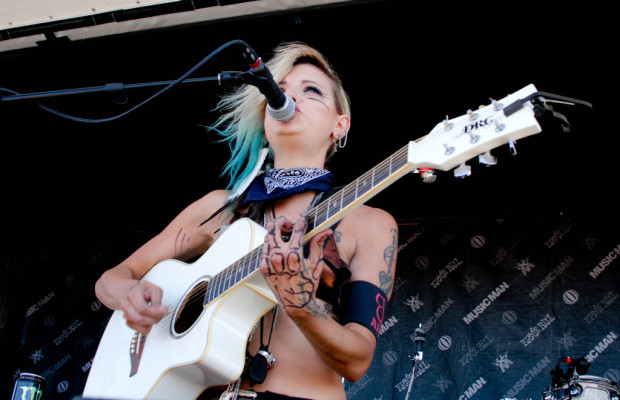 Back in July of 2010, we had the opportunity to interview the very talented Juliet Simms of Automatic Loveletter, and ask her about songwriting and touring. Since then, she has gone on to be runner up on the second season of The Voice.

Was there a band, show, or concert that got you into music? What was it?
I’ve been into music for as long as I can remember, but I guess Disney movies.

When was it when you decided that you wanted to play music for a living? Were your friends and family supportive of this decision?
Yes, I have lots of family members who are musicians, so I was always around live music growing up, it was like Kumbaya, and sing-a-longs all the time, so they were all very supportive.

Have you musically grown through the years, and how?
Of course! Vocally, and learning more instruments, more theory about the instruments, and learning how to write better songs. When you do it every day, you’re bound to get better, and if you don’t get better then you should probably quit.

What inspires you lyrically and musically?
Lyrically, boys, human emotions, basically feelings about life, or about politics, or about the industry, any kind of feeling I get is what I drive from. Musically, what inspires me is, I would say what I want to say, I mean, I kind of write my melodies to fit what I’m talking about, or singing about.

Do you have to be in a specific mood while writing music?
No. I used to, I used to have to be really sad, or like depressed, or angry, but now through the progression of my musical career I can write when I’m happy now, or when I’m feeling other emotions.

What should we expect from ‘Truth or Dare’?
Well, it’s out today (June 22, 2010) so you can pick it up and listen to it, but you should expect really what’s coming from my heart and not contrived, or from a different place. Just straight up real lyrics, from real experiences, rock and roll. Yeah, hopefully it answers things for people and makes people feel better

What is your favourite song off  ‘Truth or Dare’ and why is this?
I would say my favourite song is Fade Away. That’s because I wrote it about when I was having troubles about getting labeled, and the fear of not making it, or getting old and dying before I do something with my life, and emotionally definitely, from my heart.

Did you encounter any challenges while writing this album?
Yeah, I haven’t been on tour for about a year, and when I started vocals, my vocals have kind of been sitting in limber for a while so I went through a two week period of losing my voice, and having to not sing, or talk for two weeks, and then it got all fixed up, and it was fine!

Automatic Loveletter is on Warped Tour this year. How was it different from other tours that you’ve been on?
I have played Warped Tour before, it was in 2008. It’s different because different tours, smaller tours, regular tours, there’s not like a hundred bands, tents everywhere, thousands of kids everywhere, it’s just like crazy band camp chaos. As compared to other tours, with four bands, you usually get a hotel every night, and all tha

What is your favourite thing about Warped Tour?
Being able to wake up at the venue every day, and getting to play music for your fans, and hang out with your friends. It’s like band camp, rockstar camp, no rules, crazy fun.

Who is your favourite band that you’ve toured with? Why?
I’d say Every Avenue, because we get along perfectly with everyone in that band, we became sisters, and brothers, and it was awesome. Probably the funnest tour that I’ve ever done.

Have you ever participated or been a victim of tour pranks? What happened?
Yes I have. I’ve been handed my guitar with no strings, I’ll be getting ready to play a song and suddenly Paramore comes blasting through the speakers, I’ve been shot at by twenty different marshmallow gun. I’ve also tour pranked people before, I got up where the sound guy was, and he gave me a microphone and I sang really bad melodies over what the singer was singing so it sounded like crap. Stuff like that.

What do you like seeing from a crowd at a live show?
Energy. Craziness, dancing around, hands in the air singing, just energy is the best.

What, in your opinion, is the best social networking site to keep in touch with fans? Why?
Twitter. Twitter for sure because I read everything that kids @reply at me.

Is there a message that you’re trying to send through music?
Yeah, just to reach for the stars and do what you want to do, and not let people tell you that you can’t do it. I’m a perfect case, I’ve been trying to do this for years now and I’m finally reaching my goal, and just that everybody goes through heartbreak and headache, and I understand. I want people to be able to listen to our music and make them feel better, or get something out of it, help them.

What advice would you give to kids who want to start a band?
Practice every day, and don’t let people discourage you.

What does the future hold for Automatic Loveletter after Warped Tour?
We’re going to Japan for about a week, and we’ll be touring after that. Touring touring touring!