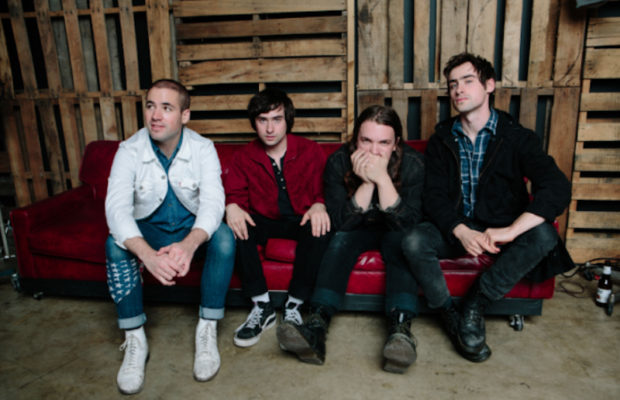 Louisville, Ky garage punk band White Reaper recently released their newest album entitled The World’s Best American Band. Along with being bandmates, Tony Esposito, Ryan Hater, and Sam and Nick Wilkerson are the best of friends. As they prepare to embark on a series of summer tours and festivals in support of their latest release, they kindly answered a few questions for us about their new album, tour life and how they’ve grown as a band over the years. These guys are fantastic live band. If you get the chance to catch a show this summer, we would highly recommend it!

Questions & Words by Emily May

Stitched Sound: Congratulations on the new album! How did you come up with the album title? Do you have a favorite track off of the album?
White Reaper: We felt really proud of our record, and we felt like nobody else was making a record that sounds like this one, so we wanted a name that would stand out too! My favorite track from the record is probably Daisies.

SS: What was it like working with Kevin Ratterman again on your second album? How did you all become friends?
WR: Kevin is the best! He’s the easiest person to work with and he’s so good at what he does it’s insane. We just became friends through seeing each other around town and making music together, he totally rules!

SS: How was the recording of your second album different than the first? How do you feel your sound has evolved since then?
WR: Our first record was all demo’d out before we got to the studio, but this one was pretty much written completely in the studio. We’ve all gotten a lot better as players since the last record.

SS: How do you feel that you have grown professionally, as well as personally, since you started?
WR: We can drink more, we eat less fast food, we all fucking shred now, and we can’t wait to get better.

SS: You just returned from SXSW. How was that experience? Are there any particular festivals you are looking forward to playing this summer?
WR: We really didn’t have time to do anything besides playing shows. It was pretty crazy but definitely worth it after all. We’re really excited to be playing every festival we have booked for the summer, especially bonaroo, mo-pop, hangout, they’re all gonna be great.

SS: What is tour life like for you? Do you feel like things have changed for you as White Reaper’s popularity has grown? What do you guys like to do for fun on tour?
WR: It’s hard to say because we haven’t been on tour since last October! Usually we wake up and drive all day and then drink at the club before, during and after our set. Then we load out and go to a hotel or one of our buddies houses, maybe get some food on the way. We like to walk around malls when we have free time, just to compare the people there to the people in our hometown. Some real weirdos hang out around malls. And sometimes we sit in those electronic massage chairs they have there. We also like playing pool and drinking margaritas.

SS: I really loved the video for Judy French! How did the idea for that video come about?
WR: Thanks! We wanted to make a lyric video and thought that would be a clever way to do it!

SS: Your album release show will be a hometown show next month at Zanzabar. How will it feel to perform on the new stage? I’m sure you have some great memories of performing on the old stage!
WR: We have tons of fond memories from zbar, that was the first place we ever sold out! A bunch of kids climbed up into the rafters! Were so happy to be playing our first Louisville show of the year on zbar’s new stage.

SS: What’s next for White Reaper?
WR: A whole lot of touring.