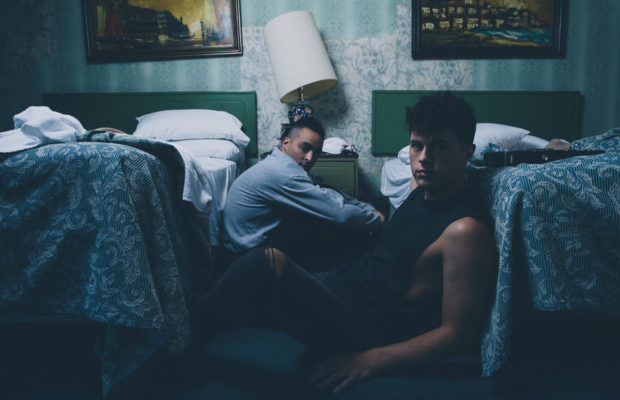 Nightly, an electronic band based in Nashville, TN, was formed by cousins Joey Beretta and Jonathan Capeci in 2015.  Having risen to popularity after uploading their debut single “XO” to Soundcloud, Nightly quickly caught the attention of several record labels.  They signed to Interscope records shortly thereafter and released their debut EP.  They are currently working on their full-length debut, as well as touring the country and were kind enough to answer a few questions.

Words & Questions by Emily May

Stitched Sound: You guys are from Philadelphia but relocated to Nashville in 2015 and formed Nightly. What prompted you to move to Nashville? How has that been?
Nightly: We actually moved to Nashville in 2010 or 2011. I guess we just wanted to move to a music town, and Nashville was closer than LA. We love it though. It’s much different than where we grew up, but it challenged us musically which was a good thing.

SS: Do you feel that you would have had the same level of success had you stayed in Philadelphia? How do the Philly and Nashville scenes differ?
Nightly: It’s hard to say really. There are so many amazing things about both cities. I think the thing that makes Nashville feel a little magical is that there are so many people who are in music full time. That wasn’t super common in Philly, at least in the circles we were in. The only professional musicians I knew were music teachers, not so much touring artists. I think just by surrounding ourselves with people who were doing what we wanted to do, it made it seem like something that was attainable for us.

SS: Seeing as you two are cousins, does being in a band with family ever present any challenges?
Nightly: It hasn’t really for us. It’s sort of all I’ve ever known, so I’m not sure what it would be like to be otherwise. I don’t have anything to compare it to. We had to learn that it’s ok to disagree, and figure out how to get past it when it does happen, but on the big issues, we’ve always been on the same page.

SS: Your single “XO” has really taken off! What was it like for you to expect/hope for 100,000 plays in the first month and instead get a million? Did you ever imagine that “XO” would garner such immediate attention?
Nightly: It’s an insane feeling. That song meant something to us, and that’s all we knew – but the fact that it means something to other people as well is so cool.

SS: I read that after the success of “XO” you began hosting showcases in your garage. What was that experience like? Is that where you caught the attention of Interscope Records?
Nightly: It was a weird thing. When that song started getting some traction online a lot of people from the industry started reaching out. Instead of flying all over the country to showcase in stiff label buildings, we told record labels that they could come to our garage and see us play. Sorta felt like playing on home turf.

SS: What led you to decide to sign with Interscope Records? How has signing to a major label changed things for you personally, as well as professionally?
Nightly: They really understood our vision, and they seem to be a very artist friendly company. We have a lot of respect for all the people there and we vibed well with everyone. Signing has just increased the network and team of the band, but it’s still all us and our vision. They just help facilitate.

SS: How has the reception been to your debut EP so far?
Nightly: So far, so good! It’s really fun to see fans making art from the lyrics and coming to shows singing every word.

SS: What sparked your interest in music?
Nightly: I think it’s just an interest that we were born with. Every time I’ve tried to walk away it sucks me back in.

SS: When did you realize you wanted to start a band? Have you always wanted to play music together?
Nightly: Yea we have. We knew since we were kids that this is what we wanted to do. Our parents have pictures of us when we were 4 with plastic guitars.

SS: From where do you derive your inspiration when writing songs?  Do you both write the songs or is one of you the main songwriter?
Nightly: It’s super collaborative. We really just try to write about whatever is real to us. Lots of things can be inspirational though in songwriting. I personally really get inspired by Joey’s guitar playing.

SS: Do your songs reflect personal experiences or are they influenced by observations of the experiences of others?
Nightly: Personal. It could be about someone else’s situation, but even so I try to make everything I write mean something to me.

SS: Joey – we read that you developed the stunning lighting display for Nightly’s live shows. How did that come about? Have you always had an interest in lighting or were you simply executing your vision of how you saw the live experience?
Joey has always been very tech savvy. We had a vision for our live show and we wanted to be able to transport the audience to our own little universe for 45 min or so each show. Joey brought that vision to life with the lights and programmed the show with lights we built in the garage.

SS: How has touring been? What is tour life like for you? Any especially memorable experiences?
Nightly: Tour is great. It’s still so crazy to go somewhere you’ve never been and have people know your songs.

SS: Do you have any tours or festivals coming up that you are especially looking forward to?
Nightly: Bonnaroo!

SS: You guys are currently working on your full-length debut!  How is that going?  What has the recording process been like?  What can your fans expect from the new album?
Nightly: It’s been great! We have a ton of songs, right now we’re just figuring out which ones go together.

SS: What’s next for you guys?
Nightly: More videos, more touring, and maybe a few surprises!