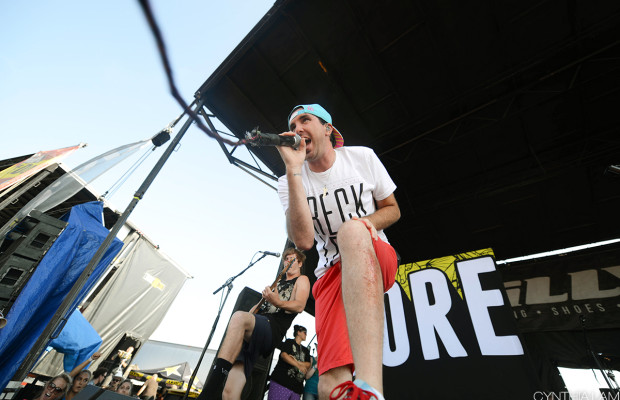 As traffic was bumper to bumper I was beginning to think that this interview wasn’t going to happen. I prayed to the Traffic Gods that somehow it would light up a bit so we could all get to the venue in time for a six o’clock interview with the Texas native band Forever The Sickest Kids.

The sky was finally turning a light shade of purple and the traffic let up enough for me to meet up with Kyle Burns (Drummer) and Marc Stewart (Guitarist) outside of The Culture Room in Ft. Lauderdale, FL. We stood around joking about the hot weather and how it wasn’t that different from their home in North Richard Hills, Texas. We laughed about how Kyle loved Miami and how he wanted to go there after their set ended tonight.

With “The Spring Break Your Heart Tour” being their first headlining tour with some great bands such as Breathe Carolina, Before Their Eyes, We Are The In Crowd, and This Century (Select Dates) they were super excited for the rest of their journey and what was coming up tour wise after this run was over. “We’re going on The Zumiez Couch Tour during the summer, with Anarbor” said Marc, “Oh, and you might be seeing us at some Simon Malls, doing some acoustic sets…” Kyle said pausing and then looking at me with huge eyes, “FOR FREE! We’re in an economy crisis guys- Trying to help out! ” Which just goes to show just how much these guys love their fans; doing some free sets to make sure that everyone gets to hear their amazing talents live.

When asked about what to expect for their set and upcoming shows Kyle and Marc said that you can expect, “Other than music, lots of good energy and more for your eyes and less for your ears.” I know that I speak for anyone who has seen their set that they weren’t kidding about the good energy and great music. I couldn’t stop smiling watching them preform. And there was an equal amount for your eyes and your ears! “We’re even playing two new songs from our new Self- Titled record (Forever The Sickest Kids) during our set! But that’s all you can know because the rest is a secret!” Kyle told me.

We talked some more about their new Album and how they feel about the “feel” of the new album. “It’s a different type of album that we feel out of everything we’ve done so far that this album represents us as a band and that’s why it’s our self-titled.” Marc said all smiles obviously proud of the new album and what’s to come from it. “We’re trying to get our new Single ‘CrossRoads’ out there and on the radio,” Marc and Kyle said as their message to the Fans, “So call in to your local radio stations and request CROSSROADS off of our self-titled album Forever The Sickest Kids! Help get the song out there!”

And as the last words before the show to the fans were a very humble set of ‘thank yous’ on behalf of the whole band.

Be sure to pick up the Self-Titled Album Forever The Sickest Kids on iTunes “For cheap!” in the words of FTSK’s very own Kyle and Marc.

Also, don’t forget to call into your local radio stations and request the single “Crossroads” and help this very deserving band get out there some more!