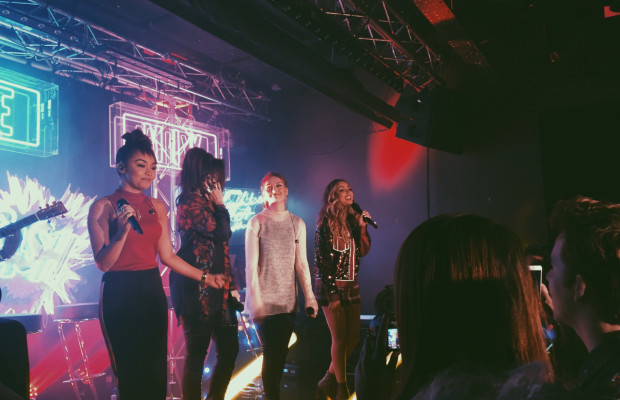 Hot off of the release of their third album, Get Weird, Little Mix teamed up with Yahoo! and Tape London to throw an album launch party for family, friends, and most of all, fans. Located in the middle of Central London’s Hanover Square, Tape London hosted and entertained the small crowd with an open bar and lively house music while everyone waited for the guests of honor to take the stage.

Streaming worldwide on Yahoo!, the event’s crowd consisted mainly of Instagram contest winners who shared their weirdest Get Weird selfies and were handpicked out of nearly a thousand photos that were submitted.

Taking the stage a little after six, Little Mix opened up the party with an acoustic performance of their current single “Love Me Like You.” Having only landed back in London a few days prior since promoting Get Weird in the states, the girls in Little Mix looked energized and were buzzing onstage. Showing off their infectious personalities with accent impersonations and laughs all throughout the set, it was clear only seconds after taking the stage that the girls are having the time of their lives with this new album.

Fan favorite “Change Your Life” was the second song performed that night, taking fans back to the very beginning of their career post-X Factor. While songbird Perrie Edwards refrained from hitting her high note solo at the end of the bridge, causing laughs from both the crowd and the girls, the performance was a true testament of Little Mix’s growth since their competition win in 2011.

Mixing in with the performances, Little Mix took time answering fan questions and discussing their current favorite tracks off of Get Weird that was released on the 6th of November.

For Jade Thirlwall, the track that inspired the album name, “Weird People”, is a favorite of hers due to its high energy and positive message that everyone should be weird and proud of who they are.

Jesy Nelson noted that the track “I Love You” was a very emotional one for them to record and the overall theme of it makes it one of her favorite on the album.

“Lightning”, a soulful R&B influenced song, is one that sticks out on Get Weird for Leigh-Anne Pinnock. Discussing mainly the unexpected chorus beat drop, Pinnock is a major fan of not only the lyrical content of the track, but also the fusion of musical styles throughout.

“Love Me or Leave Me”, one of the main ballads on Get Weird, holds a lot of meaning for Perrie Edwards. Noting that it is a “depressing” choice in contrast to the picks of the other girls, Edwards brought attention to the incredibly beautiful notes performed by herself and Pinnock in the choruses, wondering to even herself how they were both able to execute the notes on the track.

Kicking off an acapella performance of “The End”, a track that was introduced to the Little Mix fandom long before the release of Get Weird, Thirlwall brought up that while they have performed the song many times in the states, they haven’t been able to get it perfect yet.

As truly one of their strongest vocal acapella performances the girls have ever put on, the perfect timing and mixing of solos and harmonies show off the girls’ talent as not only solo artists, but also as a group. A flawless performance that caused the girls to even clap for themselves, there is no denying the talent that oozes out of the girls’ voices when they perform this track.

Their hit single “Black Magic” and fan favorite “Grown” helped to the close the party, generating the loudest and most energetic responses from the crowd. Showing off the girls’ bubbly personalities and the crowd’s dance moves, the upbeat tracks ended the party on a perfect note and fans were left satisfied having heard those two particular Get Weird tracks.

After the performance, guests of the night had the exclusive opportunity to meet the Little Mix girls, showing that the girl group takes every chance they can to meet their supporters. It’s really hard to believe a musical group like Little Mix can be as sweet as they are talented. Taking time to briefly chat and hug every single fan that came through, the sea of compliments, smiles, and questions regarding how fans were doing that came from the girls was almost overwhelming because it was so unexpected.

As truly one of the most down to earth acts in the game right now, the album release party showed many dynamics of the girl group including their raw talent, extraordinary personalities and mutual love with their fanbase. With Get Weird already getting predictions of a #1 debut slot on the UK charts, this new chapter for Little Mix is proving to be their best one yet.