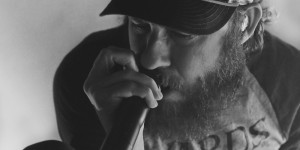 It started off as your classic Friday night going to a show scene. Nearing five PM, the line-up already started making it’s way down the parking lot. Excited fans and concert goers were on the heels in anticipation for what the rest of the night would hold for them. On this particular night of January 27th, the crowd would have the pleasure of seeing international act In Flames along with Trivium, Veil Of Maya, and Kyng.

From the way that everyone crowded towards inside of the venue when doors opened, it was easy to tell that they were excited for the night. Everyone immediately went towards the merch area or towards the stage, the venue set up in a rather unusual way. Due to the fact that 1/20th of the crowd was minors, the whole floor was open to 18+ (adults) while the balcony was open to minors only unless accompanied by an adult. This set up was definitely a hassle for myself, (along with the kid who tried getting in because he was “almost eighteen”), but we made it work.

First up was Los Angeles’ trio Kyng. Although they aren’t a band that’s really active on stage, they still brought a set that left the crowd content. From the several people who were already rocking their hearts out and moving around wildly, it was easy to tell that if Kyng returned to Edmonton, they would have a rather wonderful turnout.

Next up was Veil Of Maya. This quartet hailing from Chicago, IL played an extremely impressive set filled with relentless energy. Although some of the people in the crowd did not know who the band was before the show, by the look on their face it’s sure that they went home and immediately checked out the band online. There’s no denying that the whole band has great chemistry on stage and that they just love playing shows.

As the lights dimmed and the disco ball went insane the crowd immediately grew louder, their cheers nearly overpowering the sound of the intro. When the Trivium finally stepped on stage, the crowd started moving, going insane, and opening up pits. Throughout the hour long set the crowd held no signs of stopping and went completely wild. Watching the band live, there was no denying the number one reason as to why. Trivium holds such amazing stage presence and not to mention they have phenomenal sound live.

Nearing the end of the night the crowd was starting to become impatient waiting for the headliner to grace the stage. Even before they played the crowd was already pushing and being rowdy. It was no surprise that when the band took the stage a huge pit opened up and a wave of crowd surfers headed towards the barricade. Seeing the crowdsurfer’s happy faces as they made their way to the front and hand-bump or high five Anders Fridén, the vocalist of In Flames, was priceless. In Flames brought their best to the show and throughout the whole set, the crowd was giving it back. One thing that I noticed about the band was that they’re very interactive with the crowd, something that many bands lack and should have. It was definitely nice to see Anders tap the security on their shoulder and let them know about the girl who looked like she was in a lot of pain at barricade. Even though she didn’t look too happy when she was pulled out, it was still nice to see that he cared.

Overall, it was a nice night. All the bands on the tour played solid sets and the crowd left satisfied with how the evening turned out.