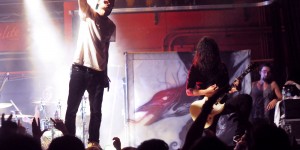 The I’m Alive tour consisted of five talented bands including Close To Home, Texas In July, Of Mice & Men, Miss May I, and the tour’s headliner We Came As Romans. I attended the date in Edmonton, AB at the small but wonderful venue The Starlite Room. When the tour was first announced and I saw the venue for this tour, I was pretty happy. The venue was about the same size – if not a tiny bit bigger – than the venue that We Came As Romans played the previous year they were here, but Starlite shows are known for how hot, humid, and wild they can get.

As the doors opened and the crowd began to maneuver their way inside the venue, it was apparent that the venue was going to fill up quickly. While the crowd was more stagnant for the first two bands – Close To Home and Texas In July, by the time Of Mice & Men were about to perform, many attendees were already glistening in sweat and out of breath. It was apparent that the crowd simply adored them. Miss May I took the stage after Of Mice & Men, and throughout their whole set the crowd was jumping around and moving. One memorable moment would definitely be Benton’s call for a “Wall Of Death” which was a rather successful one although many people seemed to trip and fall.

Soon after, the lights dimmed as the most anticipated band of the night was about to start performing. Not even fifteen seconds into their first song, the crowd was already going absolutely wild, many people were being separated from their friends, jumping around, and almost creating chaos. We Came As Romans played quite a few new songs live including “Cast The First Stone” and “What I Wished I Never had” which sent the crowd going crazy.

I’ve had the chance to see the band four times in the past year, but I have to say that this show topped all of them by far. (I know, in my past post of Warped Tour I said it was the best that I’ve seen them live) Being in a packed venue filled with enthusiastic fans singing along to every song, and also just the general atmosphere of the Starlite Room really made the show unique.