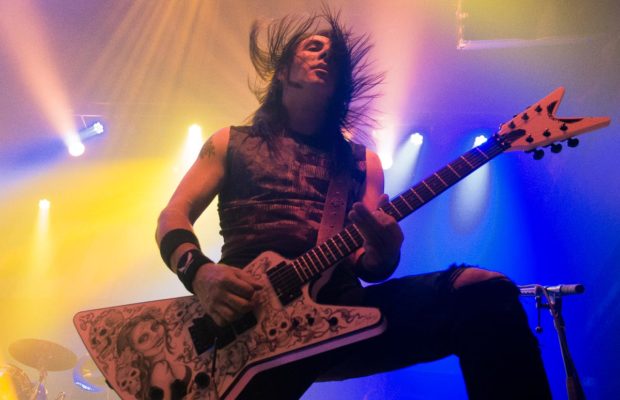 Hellyeah with Righteous Vendetta and Kyng

Hellyeah made a stop recently on their current tour in Louisville, Ky, performing to a packed venue of diehard fans.  As the lights dimmed before the band took the stage, the crowd went wild, cheering for the band to come out.  From the moment they hit the stage, Hellyeah delivered an incredibly energetic performance and played a nice selection of songs from their catalog.  Singer Chad Gray, with “blood” on his face and his signature dreadlocks, was really engaging with the crowd for their entire set.  Whether it was kneeling down on a small platform at the front of the stage, singing to the crowd, or engaging the crowd with banter and conversation throughout the set, Gray really interacted with the crowd.  At one point, he spotted a young boy with a mowhawk on his dad’s shoulders, calling them out from the crowd.  He proceeded to tell the dad how cool it was that he brought his son to the show and told the boy how cool it was that he was such a fan of the band and of going to concerts at such a young age.  It’s apparent that Hellyeah love and appreciate their fans, with Gray referring to them on a few occasions as his hellions.  There is no doubt that they gave their fans an amazing concert!