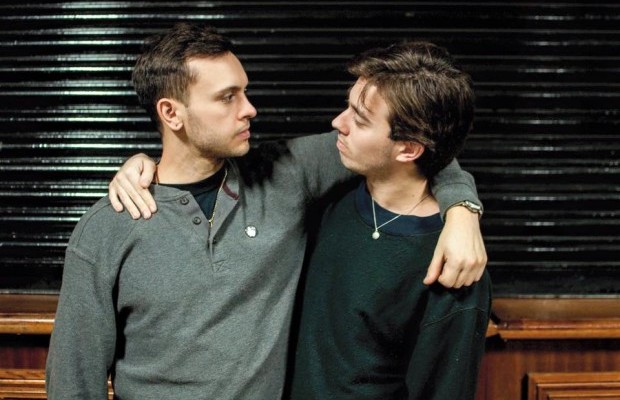 Stitched Sound sat down with Jake Duhaime and Nick Hamm of Citizen before their sold out show in London last month to talk all about their latest album, Everybody Is Going To Heaven, future music plans, and their upcoming spring headlining tour in North America.

Twiddling their thumbs in between interviews, the calm and collective demeanors displayed by Nick Hamm and Jake Duhaime make it hard to believe that Citizen’s about to play a sold out show in London.

Thousands of miles away from their home in Ohio, Citizen’s European tour with Turnover is coming to a close in rainy, cold London, a place where Jake says they haven’t seen much of.

“That’s the thing, there is no time [to sightsee]. We’ve gone to a lot of places, but the day is pretty soaked up by the things we have to do here so we have to miss out a lot.”

While their first European headlining tour might not be the Euro-trip many people would imagine, Jake is all positivity as they chat about the shows they put on over the past few weeks.

“The first show set it off which was Amsterdam. It was the fear of the unknown between it being a new place and [us] just playing the new record. It ended up being incredible, it was one of the best shows of the tour.”

While they chat for a bit about a few sights they were able to see in Europe, including a day wandering around Cologne and climbing to the top of a cathedral, the topic of conversation quickly shifts to their time in the studio this past year recording their second album, Everybody Is Going To Heaven.

After the unexpected success of their debut album, Youth, in 2013, many fans and spectators were expecting a follow up album that would mimic the sound and style found on Youth. However, Citizen surprised many when they dropped their second album this past June, debuting a collection of songs that sound nothing like their 2013 release.

“A lot of bands feel really pressured about writing a follow up to an album like Youth that changed everyone’s lives,” Nick opens up, explaining that Citizen knew the second they left the studio after finishing Youth that their next album was going to be very different. This mentality allowed them to feel no pressure or obligations when they began production on Everybody Is Going To Heaven.

With both records being virtually on different ends of the music spectrum, pinpointing exactly what genre of music Citizen falls into has been something many onlookers have struggled with since the formation of the band in 2009. Surprisingly enough, Jake confesses that the band themselves even have a hard time explaining their sound.

“It’s pretty hard to pin down what Citizen is as a genre, in my personal opinion, and I think that comes from the influences we have. The five of us all listen to really unique things and I think that makes it pretty complicated to explain.”

When in the studio, it is this clash of outside influences amongst the members that helps shape the unconventional sound that is produced by the band. From pop to punk, the members of Citizen draw inspiration from all sorts of music, as Nick shares.

While being in the studio is often a process many musicians look forward to above all other aspects of being in a band, Jake is quick to argue that the heart and soul of Citizen is found within their live set.

“Not to say that recording and rehearsals aren’t fun, but it’s a little like schoolwork whereas our live shows are the pay off. If someone comes [to a show] and they aren’t keen on Citizen or aren’t familiar with us, I feel like our live show has won a lot of people over that way.”

The set for their European tour included hits from both albums, opening up every night with fan favorite “The Summer”, off of Youth, and closing with “Drown”, a track from the split 7” they released with Turnover in 2012.

Bringing their songs to life every night, Jake’s comment about winning people over with their live show is spot on. Sounding as good live as they do on their recorded albums, all of the members in Citizen give it their all on stage, putting on a performance that satisfies diehard Citizen fans and wins over those seeing them for the first time.

Much to Jake’s relief, and to many fans’ disappointment, Citizen has more touring than studio plans for 2016. From sold out shows in Europe to announcing their first headlining North American tour with Turnover this spring, Citizen’s planning to win even more people over with their live shows this year.

Nick shares that this headlining tour is a long time coming for Citizen, confessing that many of their tour ideas over the past few years have been shot down without a second thought.

“I think our agent and manager get pissed off quite a bit because every idea we offer is maybe not the most successful choice. A lot of our ideas can be risky and this is the first time that we are doing something that people are really asking for and people are super excited about.”

The response from fans about their North American tour has been incredibly positive so far, with many of the dates already sold out across the country. With that, the pressure to deliver a good show to all of the ticket buyers is apparent, but is something that Jake believes the band will be able to do without a problem.

“I think it’s going to be pretty massive shows, definitely the biggest we have ever headlined so we have to rise to that occasion and make sure that we are playing a really exciting set. We have to be at the top of our game.”

The conversation quickly shifts as it is mentioned that fans are already asking for new music, less than a year after Citizen put out Everybody Is Going To Heaven. This eagerness from their listeners is something they believe is due to the Internet and instant access people are constantly looking for.

“There’s the Internet for you. People want a new record six months after we released our last one.” Nick is quick to chime in before saying that they owe much of their success to the fast access and easy link sharing the Internet offers to their fanbase.

When Youth was released in 2013, the album artwork and the collection of songs could be found everywhere on social media, especially on websites such as Tumblr. While the downloading of Youth resulted in Citizen receiving no money for their creation, they managed to reach a greater amount of people then they thought possible.

“I’d be lying if I said we didn’t owe every ounce of success to the Internet. At this point, word of mouth in 2016 is word of clicking. It’s definitely helped our band massively, but I do think it can hurt bands in some cases.”

As the interview comes to a close, the soft padding of feet can be heard above as kids are slowly being ushered into the venue. The sound causes the atmosphere to shift from calm to excited as Nick and Jake are quickly reminded that they have a sold out, headlining show to play.

With their schedule clogged full of shows and tours around the world, Nick is still hoping Citizen will get some demoing time in the studio, but there are no plans to release an album this year.

“We are always thinking about new music. I mean, the day we are coming out of the studio, we are already thinking about the next record. It doesn’t necessarily mean that people are going to hear anything this next year.”

For now, Citizen seem focused on performing anywhere and everywhere they can, spreading their music to all who will listen. With a schedule that goes on for months, Nick remains hopeful and excited for what 2016 and their fans will bring to Citizen.

“We are always looking forward.”

Read our feature with Nick and Jake where they talk about the pros and cons of music streaming here.

Check out the full gallery of photos from their sold out show in London here.

For more exclusive photos of Nick and Jake, keep your eyes out for Stitched Sound’s upcoming digital issue this spring!