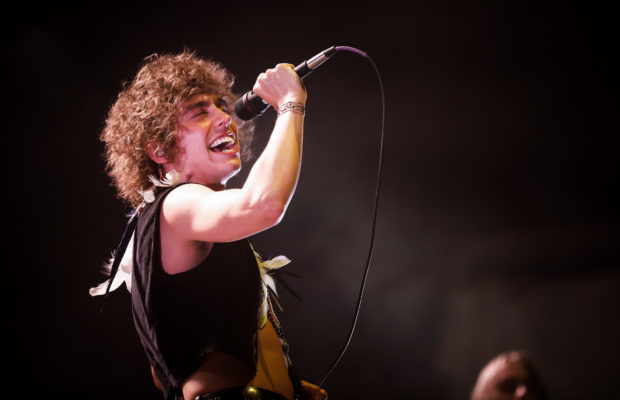 The Central Florida Fairgrounds house the Orlando Amphitheater which, until this show, I had never seen so packed. Although the show didn’t sell out completely it felt like it did. The crowd packed in early as the sun was setting to catch the openers set. The husband and wife couple Chris Turpin and Stephanie Jean form Ida Mae and from the way the crowd sang in sync with the band, I never would have guessed that their debut album released just a few weeks prior. Ida Mae brought a very rustic blues sound to the stage that was a very refreshing switch up from the Metal and Punk music I usually blast. The couples voices compliment each-other so well and the music they produce together is beautiful.

Next up, as the moon set, Greta Van Fleet took the stage to play one of Orlando’s most anticipated shows of the year and within moments the crowd was immersed in the performance. Josh Kiszka (lead vocals) threw roses to the crowd as Jake Kiszka (guitar), Sam (bass/keys), and Danny Wagner (drums) took their places. The dazzling light show amongst Josh’s incredible voice was an enamoring combination. Their new age 70’s sound brings forth nostalgia from long time rock music fans, along with the excitement of new twists on a classic euphony.

Greta Van Fleet played for the next two hours and while the front of the crowd kept jumping to the beat, the people in the back (including myself) laid back on the lawn and just enjoyed the music.

Greta Van Fleet is on tour til November and to see if they’re coming to a city near your click here and if you want to check out the new up and coming band Ida Mae’s new debut album, Chasing Lights, click here!

*to view full size images please click on the thumbnails