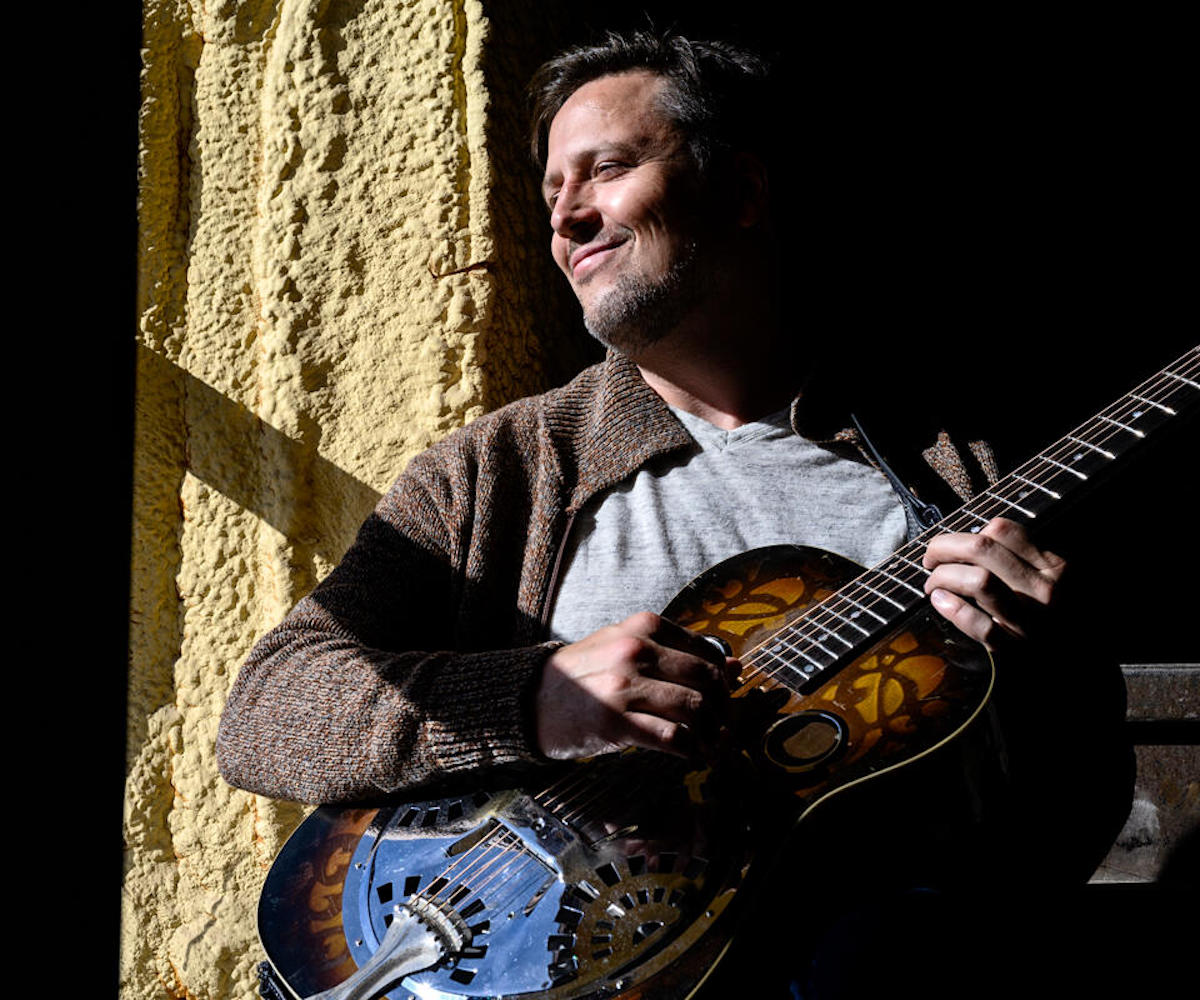 New York singer/songwriter/guitarist Eli Musser will be releasing his debut, self-produced album Content next month which was mixed by veteran technician, Bryce Goggin (Pavement, Evan Dando, Sean Lennon, Ramones, etc).  Although he has recorded music with others in the past, Musser considers this his debut album as it is his first recording under his name.  A formally trained musician, he is a skilled songwriter with a very confessional and personal writing style and is a scholar in music theory and  a creative in the studio.  Creating guitar-based music with memorable pop melodies and hook laden lyrics, he has started creating a buzz with his recently released singles “Smile (‘Cause Somebody Loves You)” and “Die To Be With You”.  Musser’s newest single “Apalachicola Blue” premiered on Billboard (check out the article HERE) on November 8th and came from a finger-picking pattern that he had previously worked on and set aside until recently.  The song will be on Musser’s upcoming album, which he is geared up to release on December 6th.   With plans to write more songs and play more live shows, Eli Musser is definitely an artist to keep on your radar!  You can follow Eli Musser and stay up-to-date on all upcoming artist, album and touring news via the following links:
Website | Facebook | Instagram | Twitter | Spotify | SoundCloud | iTunes/Apple Music | YouTube
You have a very confessional and personal songwriting style.  When did you first develop an interest in songwriting and how do you feel your style/process has evolved over the years?
I’ve been interested in songwriting since I was a kid, listening to old records my parents had, but also making up little songs and poems and stuff just for fun. My first real attempt at songwriting was probably in high school, something I wrote for a girlfriend at the time. Over the years, I began to look more for economy and playfulness in the lyrics, and a certain melodic stickiness with the music. I’m at a point where I know very quickly if something is going to work its way into usability… I’ve got song nuggets, musical snippets and lyrical chorus ideas, that I’ll hold onto for years before I find a use for them. These days, I don’t rush to finish a song — I’m happy to wait to catch the right train.
You will soon be releasing your self-produced new album Content.  I read that a lot of the writing for the album wends its way into various compositional corners.  What can you tell me about the writing process for the album?  Did you have any specific goals for the album going into it?
The writing process was really culling down a lot of what I considered to be songs that had a successful “group identity,” material I thought belonged together whether because of a vibe or a mood or even a certain key. My goal for the record was: it needed to be something that I didn’t feel compelled to skip tracks while listening. I have a terrible musical attention span, and that actually serves me well when it comes to creating a litmus test for my own material.
What can you tell me about the other musicians that played on the record, as well as your fellow bandmates?
I was extremely lucky to get some bonafide players on this album, and all excellent humans to boot. As the recording sessions progressed, I found it was important that they also had some perspective — whether that was projects they’ve been in before or their own solo material or whatever. Same goes with the guys I’m playing with now: they’ve got deep, adventurous musical lives that really inform my own songs.
You recorded the album in a few different studios- Renegade, Sound on Sound and Trout Recording.  What influence do you feel that Bryce Goggin, Rich Travali and Geoff Sanoff had on the making and outcome of the album?  What was your experience like working with them?
For one thing, knowing myself what I wanted to achieve was paramount to getting a cohesive sound from all the tracks. Once I got into the recording process, those amazing engineers kept stunningly high levels of quality when it came to the tracking and mixing. For example, Renegade has a CLASP system which in a nutshell allows you to record to tape for the sonics, but print simultaneously digitally, which basically means it’s the best of all possible worlds when it comes to the sound on the tracks. Predictably, it’s also a beast to maintain and sync, and that’s just one of the things Geoff Sanoff handled with unshakeable casual aplomb like you or I would brew a pot of coffee. Plenty of similar stories with Rich and Bryce — all three are top-shelf gents with decades of award-winning experience between them. I would be remiss to exclude Joe Lambert, whose bang-up mastering skills are on the same respective level. My record sounds the way it does in large part because they’re all totally awesome.
You’ve mentioned having recorded an earlier version of “Die To Be With You” to tape with a well-known analog only producer.  What led you to want to later re-record the song differently?  What are your thoughts on analog vs digital recording in music these days?

I got a lot more confident and comfortable after those analog sessions, principally as a result of working with severe limitations. The analog-multitrack-tape world demands rigorous attention to performance but also to arrangement. Giving yourself a smaller number of options should, in an ideal scenario, spark some cool problem solving once the tape starts rolling. You get accustomed to thinking about the minimum number of tracks to pull a song together. Horizons broaden greatly when you take that thinking back into the digital world. Though if you don’t stay cautious about the economy of the record, you can end up losing that edge.

What can you tell me about the cover art for your album and the inspiration behind it?
Inspiration courtesy spending my birthday in 2018 at Kailua, on Oahu. That trip came at a great time; the songs were recorded and I was enjoying a Hawaiian vacation with my now-fiancée, who snapped the pic the first morning of the trip. We walked to the beach early in the morning — wide awake because of the jet lag — and as I got back from a morning swim, the sky was unbelievably gorgeous. At the time I wasn’t at all thinking of using any images like that for the record… but as the mixing took shape, and I had a few weeks to absorb the vibes of the record, I paired the name of the album (Content) with that image. Just a very happy accident, in retrospect, one that I think complements the songs.
When did you first discover your love for music and decide you wanted to pursue a career in music?  Did you grow up in a creative household?  Who were some musical inspirations that influenced you?
I can’t remember not loving music. I don’t know that I ever thought about pursuing a career in music… despite the fact that I went through a pretty legit music school, I knew I was never destined to be a jazz session guy or a hired sideman. I had gone through the rigors of those programs, and could play and sing, but I would say rather than becoming more obsessed with music, music became more obsessed with me. I couldn’t shake the habit, even though I pursued another career in marketing and advertising — which ended up supporting my musical ambitions. Eventually it became clearer to me that I didn’t have anything left to use as an excuse. Mostly I just wanted to write some songs that were the best I could possibly make them, get some things I wanted to hear out into the world. I still feel that way.
I grew up in a household that valued education and the arts and culture. My parents had very recently moved back to the States, after seven years in Germany, just before I was born. My mother studied art; both parents played in their high school marching bands. It was important to them that their kids played piano, took painting classes, all that stuff. I’m really grateful they felt that way.
Musical influences — too many to list! Some brilliant ones: Hendrix, The Beatles, Art Tatum, Jaco Pastorius, Talk Talk, Radiohead, Chopin, Bach, Weird Al, Longmont Potion Castle… all those and many more. I’m a huge fan of the esoteric, underdog artists who really keep plugging away and don’t take no for an answer. I would be a lesser musician and human being if there weren’t albums from artists like Homeboy Sandman or Halloween, Alaska coming out of left field and rocking my world on repeat for months at a time.
I read that you recently celebrated World Vegan Day (I’m vegan too)!  When did you become vegan and what are some of your favorite vegan places in NYC (or elsewhere)?
Three and a half years ago, I made the switch. I’ve gone back and forth with regards to dairy and eggs at various times, although lately eating almost entirely vegan once again. New York is an amazing place for vegan restaurants! I’m a huge fan of Peacefood Cafe, Honeybee’s, Franchia, Beyond Sushi, and anywhere selling a really mean Impossible burger.
What’s next for you?
More shows, more new songs, more studio time, rinse, lather, repeat.