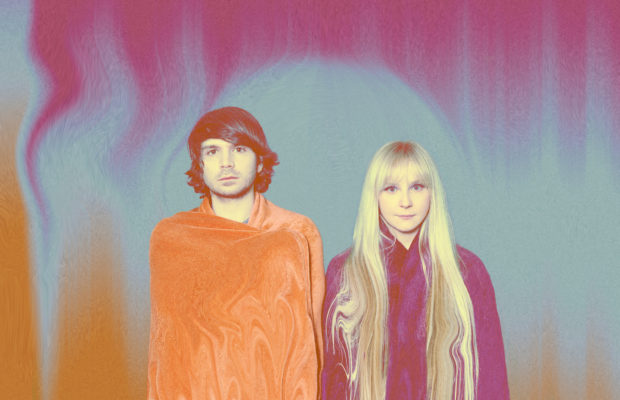 For those that may not know, how and when did Corbu form?

Todd and I played together in a friend’s band, but Amanda had never played a note of music before joining Corbu. She was a friend of mine that always had good ideas for the songs, and when it was time to play live, I taught her how to play keys. That was just a few years ago, and now she plays a million things at once and produces each track with me.

Corbu put out your debut album, Crayon Soul, at the beginning of the month. What was the writing process like and how long were you in the studio for?

The cliché about how you work on your debut album for your whole life is probably true, but we focused on this group of songs on and off for a couple years. Our favorite songs-in-progress all had a similar vibe – something about being in nature and being in space.

There’s a set of space colony paintings that NASA commissioned in the ’70s, with trees and fields enclosed in a giant tube orbiting Earth. We decided that anything we made for the album had to “look like” and soundtrack those images.

We were in an actual studio with Abe Seiferth for a few months on and off, and the record really grew up into its final form there. Then we mixed it over two weeks with Dave Fridmann in upstate NY, which was one of the best experiences we’ve ever had as a band or otherwise.

Your hometown is New York, NY. Has the local music scene in that area influenced Corbu in any way and if so, how?

We’re all originally from Pittsburgh, but we met and live in NYC. It’s impossible not to be influenced by everything that happens there. You’re surrounded by creative people. Everyone is hungry, everyone is constantly pushing. You watch your friends struggle and succeed, and you all go through it together. I’ve learned everything I know in New York – everything before it was like pre-school in comparison.

You are heading out on the road with Bloc Party. What are you most looking forward to about the tour?

We’ve never been on a big tour like this before, so it’s a little scary. We’ve all been fans of Bloc Party since Silent Alarm, so it was pretty incredible when they asked us to come along with them. We’ll be playing bigger stages than we’ve ever played, in states we’ve never even visited, so we’re really looking forward to connecting with people that have never seen us before. It’s also a rare opportunity to see how a band like Bloc Party approaches things, and just see what life is like on the road.

We also play Austin City Limits on September 30, and the fact that the tour will end with us all watching Radiohead together feels like the perfect way to close out the experience.

You are very active on your social media accounts. Whether positively or negatively, how do you think social media websites and the internet have impacted Corbu?

It goes both ways. We wouldn’t be here without social media – our UK label discovered us because they liked our logo on Twitter.

The negative is the constant pressure to post, and the fact that you’re judged by the number of followers you have. Some days it feels like an office job or an obligation, when you would rather be working on music. At the same time, I’m really proud of our Instagram. Creating visuals is almost as important to us as creating music, and social media gives us a way to use that to connect with other people. We’ve met so many wonderful people through Instagram, even some of our best friends, because we’re all speaking the same visual language. That’s a beautiful thing.

What are your plans for the rest of the year (in the studio, touring, etc.)?

We’re still trying to plan what’s next, but we’d love to come to the UK and continue touring in the US. We have a couple remixes we’re working on for other artists, and we’re always writing. I’m excited to start fully working on album #2, which already has its own sound, but it’s not time for that yet. We want to spend the rest of 2016 making sure that everyone that might love Crayon Soul gets to hear it.