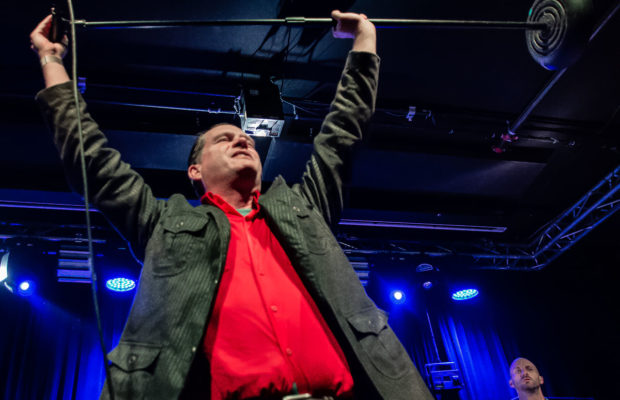 Detroit rock band Electric Six brought their live show to Louisville, KY recently to a packed venue of fans who were ready to dance and have a good time.  The band is currently on tour in support of their latest album Bride of the Devil.  The band came out on stage to a roar of applause from the crowd who was eager to get the evening started.  The band started things off with “Rock and Roll Evacuation” followed by “Bride Of The Devil” from the new album.  Singer Dick Valentine chatted with the crowd between songs throughout the evening, introducing his guitarist Johnny Na$hinal, who was clad in a white suit, as the white wolf in his natural habitat of Kentucky.  He told the crowd that the band had been coming to Louisville for 13 years now, having played their first show here with the popular Louisville band VHS or Beta, joking that they keep coming back for the guys.  He said that Louisville has so many fascinating guys, later saying that’s not the real reason at all, that he just said that to try to sell their t-shirts to more guys, getting a good laugh from the crowd.  He said the band started the band years ago to meet ladies, dedicating the next song, “Infected Girls”, to the ladies in the crowd.  He then told the crowd that, being a Saturday night, it was time to break out the dance material, launching into their smash hit “Danger! High Voltage”.  The crowd cheered and danced and sang along.  Near the end of the set, Valentine told the crowd that they were about to play their last 3 songs of the evening but that they had a special encore planned for a lady who had driven here from Arizona for the show!  They ended their set with “Dance Epidemic”, “I Buy the Drugs” and “Dance Commander”, with Valentine telling the crowd the band had come to the end of another successful evening at Zanzabar.  After briefly leaving the stage, the band came back out for their encore, thanking the crowd for spending their Saturaday night with them and then performing the songs that their fan Whitney from Phoenix had requested of them, songs that they hadn’t played live for a while.  Starting the encore with “”Boy or Girl?”, they finished the evening with “Riding on the White Train”, “Slices Of You” and “Bite Me”.  Electric Six is a dynamic and incredibly fun live band and they gave the crowd a great evening of music!  Local band Jack Holiday and the Westerners and New York rock and roll band Jeremy and The Harlequins opened the show, getting the crowd warmed up with their fun and energetic sets.