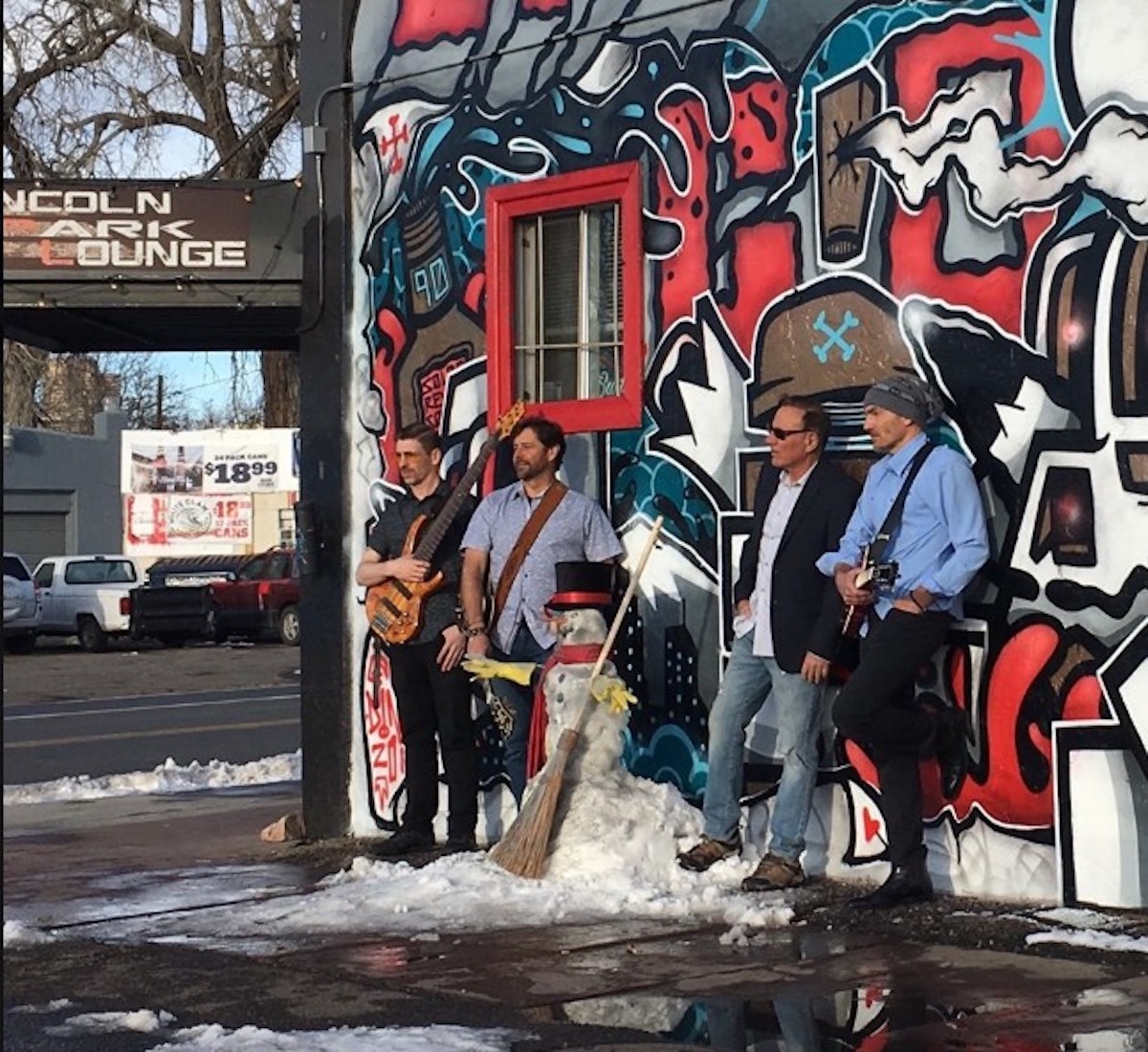 Classic rock doesn’t have to be from the 1970s to be classic.  What makes our favorite records eternal are quality songs paired with soulfully virtuostic musicianship.  The music of Colorado, Copper Mountain-based rock n’ roll band Dirty Snowman Society exudes the swagger, the emotive urgency and the dynamic musicality of rock’s halcyon arena era.  The quartet, however, furthers the continuum with modern touches of grunge and alt-rock and a rural bravado informed by a vigorous high-altitude lifestyle in an environment where it snows 350 inches a year.  Dirty Snowman Society’s debut 5-song EP—which, initially, will be rolled out with a series of singles—is a masterful release by a band driven solely by the desire to create timeless but timely rock n’ roll.  “This is a project of love and passion—and devotion to the art form,” affirms vocalist/drummer/ co-songwriter Frank Costantini. Guitarist/co-songwriter Chris Todoroff adds: “And we want to create something that resonates with people.”  Chris and Frank are the primary songwriters of Dirty Snowman Society, but the band also features lead guitarist/songwriter Johnnie Law and bassist Patrick Linfante.  The quartet calls home a ski resort area in Colorado. The excitement of hitting the slopes whenever you want; the deep philosophical talks you can share on a chairlift with a buddy; and the majestic mountainous expanse that takes your breath away imbues the Dirty Snowman Society spirit.  Also providing inspiration is Frank’s dog, Ozzie, who has become infamous for urinating on snowmen built by neighboring children.  His handiwork is immortalized by the band name, Dirty Snowman Society.

The quartet’s tracks are muscly, melodic and tastefully layered. The songs pair bluesy riffs with infectious hooks, and feature gospel-style female harmony vocals and ethnic percussive touches, courtesy of Bashiri Johnson (Sting, Aretha Franklin, Steve Winwood).  The band’s smoldering emotive musicality also recalls Alice In Chains, Stone Temple Pilots, and other beacons of the 1990s riff rock revival. Throughout the 5-song EP, Frank’s vocals ooze a honeyed grit, recalling the era when lead vocalists were informed by blues shouters and soul balladeers. Lyrically, the band touches on everyday life struggles, politics, and romance.  “We write from our truth and what we see—there is a lot of brooding boy-girl stuff in there,” Frank says with a hearty laugh.  Taken as a whole, the 5-song EP showcases a band with vibrantly varied creative capacity. Select EP highlights include “Mad Bull,” “Taste Of Heaven” and “Eleven Days Gone.”  The showstopper “Mad Bull” is a strutting, blues-based political rallying cry in the spirit of “Gimme Shelter.”  The track’s hauntingly soulful female backup vocals are a stirring counterpoint to Frank’s urgently smoldering lead.  This is a burning missive to the current political administration, and the chorus features a biting first-person passage delivered by the President.  Here, the verbiage glowers with lyrics such as: Screw Mother Earth, I’m rich from birth/Don’t need nothing, I’ve got the button. “At its core, ‘Mad Bull’ is just a very heavy protest song,” Frank notes. “Our hope with it is that art induces emotion,” Chris says.   The moody “Taste Of Heaven” conjures the slow-burn side of Alice In Chains.  The track features nimble bluesy lead guitar, ethnic percussive touches and impactful modern rock hooks.  “That one is about a poisonous relationship that I couldn’t leave alone—sometimes we get addicted to the drama,” Frank says.  “Eleven Days Gone” showcases sophisticated musicality tucked in a blues-rock stomper of a track.  “There are a couple chord moves that sound like Burt Bacharach hung out with Keith Richards for a couple days,” Chris observes.  The track is also detailed with goose bump-inducing gospel backup vocals and Hammond organ textures.  “That song is about looking back at relationships with remorse—running away from the past but with a completely uncertain future,” Frank shares.

The collection, tentatively and playfully titled, “I’m Melting,” was recorded in Denver, Breckenridge and New York.  The NYC studio team was the esteemed Bangworld in NY and featured producer/president Brian Jones and engineer Nick Ciprano overseeing the proceedings.  The backstory behind the formation of Dirty Snowman Society began when Chris met Frank through a mutual friend.  The pair hit it off instantly, and after a bottle of top-shelf tequila, Chris pulled out an electric travel guitar and it was game on.  After adding Patrick and Jonnie to the mix, the band holed up in its rehearsal room, working up sweat-soaked covers of its favorite Cream, Hendrix and the Allman Brothers tunes.  When Chris brought in “Mad Bull,” the band experienced a turning point.  “I saw a spark in the guys’ eyes when I cranked up my amp and played the opening riff and chord progression on my Les Paul at warp 10,” Chris recalls, laughing.  “That song made us take a step back and own up to the fact that we wanted to create our own stuff.”  For Frank, whose had a successful professional career as a writer in advertising, working on original music unlocked a flow of words he had never previously accessed.  For most of the guys in Dirty Snowman Society, the band is a chance to reclaim a love of rock n’ roll, and share the joy of music with others. “It’s never too late—no matter what—to do what you love,” Frank says.  “Especially when you’re playing music with the right people and putting in the time to make it quality.”  Up next, the band are working toward a full album and Dirty Snowman Society are brainstorming a mesmerizing live show for regional performances.  Today sees the premiere of the band’s new single and video for “Mad Bull”. This track was written from frustration over the current political environment as a protest anthem.  The high intensity topic drove the opening riff, the licks and high intensity blues based rock progressions.  The lyrics are constructed with the first verse being about the executive branch, the second about Congress and the third about the press and use of propaganda.  The chorus is constructed as a first person rant by the President.  You can follow Dirty Snowman Society and stay up-to-date with all upcoming music, band and tour news via the following links: