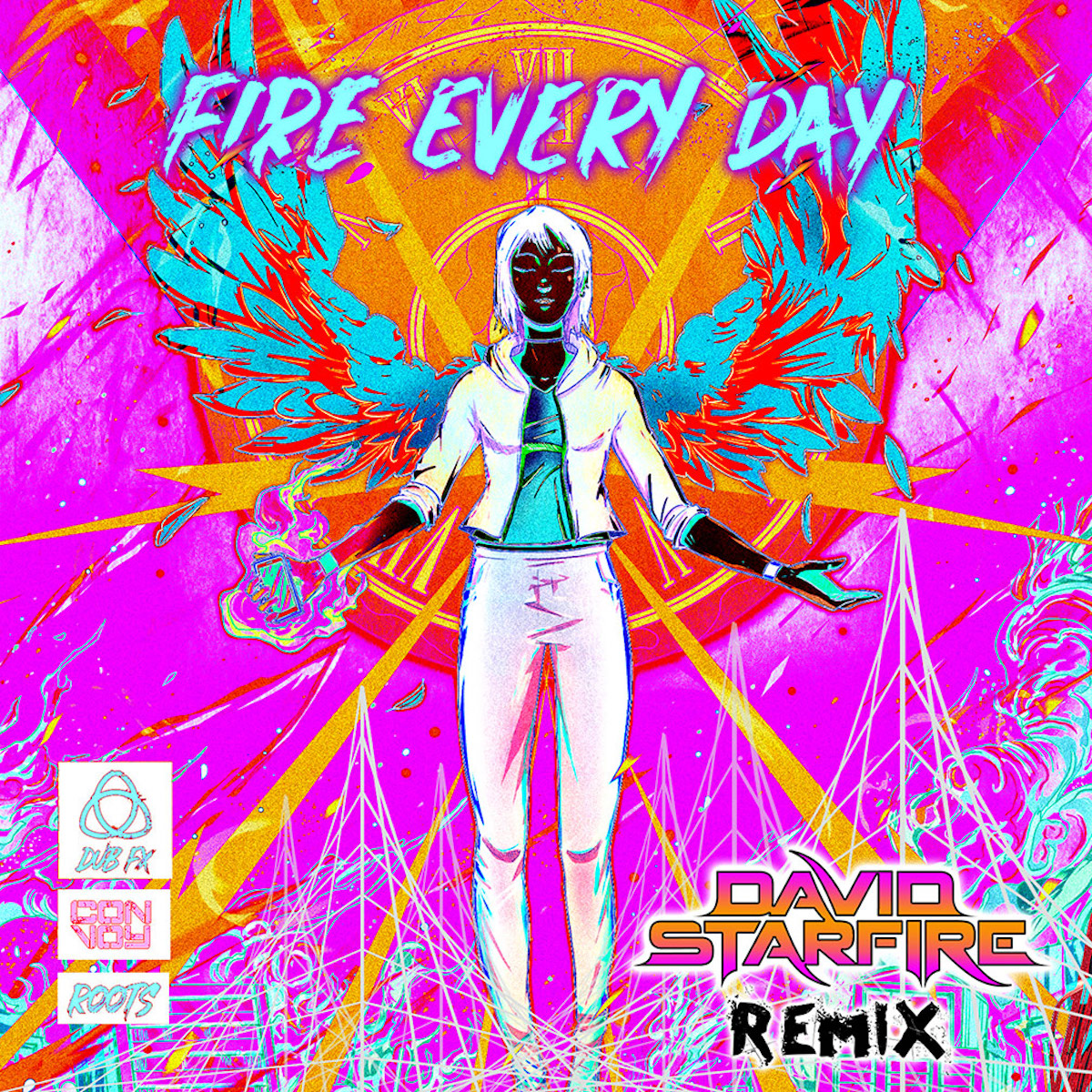 Two early pioneers of bass music, David Starfire and Dub FX recently joined forces on a remix of “Fire Every Day” in an effort to free non-violent cannabis prisoners. Best known for his riveting live performances and dub reggae influences, Australian live looping vocalist and electronic artist Dub FX released the original version of “Fire Every Day” back in 2020 on his Roots album. Starfire who is often deemed as one of the early predecessors of global bass was then approached by Last Prisoner Project to remix the track for their Re-Leaf project last year; its purpose was to raise funds and increase awareness for cannabis prisoner reform. The lyrics talk about building a brighter future for all as we look towards tomorrow. Reimagining the original, Starfire’s remix stays true to the vibe while also adding elements of dub with trap and dubstep, live sitar, and an accent of world music. To support the re-release of the remix, Starfire and Dub FX are releasing a short music video that perfectly supports the song’s theme. The “Fire Every Day” music video intercuts shots of Dub FX with kaleidoscopic imagery, and highly impressive fire spinning. The music video highlights some of the best parts of festival culture while reminding viewers of the power of “fire” and that when we all unite, we can truly make a difference. A non-profit organization dedicated to cannabis criminal justice reform, Last Prisoner Project uses legal intervention, public education, and legislative advocacy to redress the past. The organization strives to discontinue the harm of our country’s unjust and ineffective approach to drug policy reform. 100 percent of the benefits of the “Fire Every Day” remix will go directly towards freeing non-violent cannabis prisoners. The “Fire Every Day” remix is out now on all major digital platforms via indie electronic emblem Amrita Recordings. The supporting music video was produced and edited by Ruby Rose Foster.

“It’s unethical that so many people are incarcerated for non-violent cannabis-related crimes when it’s been legal for years. I’ve been a long-time supporter of Dub FX. I felt like this was a great cause to help raise money and spread awareness to free those who are wrongfully locked up for marijuana crimes.” —David Starfire

Few artists embody the term “one-man show” better than Benjamin Stanford, aka Dub FX. For those not familiar with his work, Dub FX is a street performer, recording artist and producer famous for creating intricate and impressive tracks entirely on his own. Using various vocal methods and recording them into devices used for looping and effecting sound, Dub FX can manipulate his voice in incredible ways, creating a layered soundscape in front of the audience.

In 2006, as social media was on the rise, Dub FX packed his bags, jumped on a plane and left Melbourne to fulfil his dream of travelling Europe. For Dub FX, his musical talent and street performing was only ever intended as a means of income to fund the adventure. Dub FX figured out early on that his unique process seemed to impress people passing by on the street. While most artists struggle to attain slick production finishes in a studio, Dub FX was building and layering exceptional musical tracks live and instantaneously. When people stopped to listen, Dub FX delivered meaningful, conscious messages in his singing and rhymes. He captivated his audience emotionally, and impressed them with his technical ability. These emotive street performances enticed crowds to instantly buy his CD.

Two years later, Filmmaker Ben Dowden, aka ‘BD’ discovered Dub FX busking in the streets of Bristol. BD offered to film Dub FX’s performance and later uploaded the now 30+ million view videos “Love Someone” and “Flow” to YouTube. Immediately after, promoters started contacting Dub FX from all over the world, elevating him from a street artist to a club and main stage festival act. Over the last thirteen years, Dub FX has released six records, headlined major festivals such as Shambhala, racked up more than 200 million collective YouTube views, and built an imposing social media presence, without ever receiving support from commercial radio.

Named by BBC Radio as “One of the most brilliant world-fusion producers of our time,” David Starfire is widely recognized as a pioneer of the global bass genre. His unique sound has led him to share the stage with top artists such as Skrillex and grace the stages of prominent festivals such as Winter Music Conference, Coachella, Outside Lands, Burning Man, Oregon Eclipse, Shambhala, and Lightning in a Bottle. In 2013 Starfire’s Ascend album reached #7 on the iTunes World Music chart. No stranger to the art of collaboration, David previously collaborated with the likes of Afrika Bambaataa, Ooah (The Glitch Mob), Beats Antique (Sidecar Tommy), visionary artist Alex Grey, Grammy-nominated vocalist Chaytanya, Desert Dwellers, and CloZee.

Showcasing his dynamic sound around the world in exotic places such as Thailand, Egypt, and India, David’s performances have included public and private shows for prominent companies such as Lucas Films, Samsung, Sprint, Beats Audio, Google, Nokia, HP, Virgin Galactic, Roland, Flaunt Magazine, Red Bull, Warner Music, and Atlantic Records. Over the last 14 years, David released four albums, eight EPs and a plethora of singles and remixes. His songs can be found in shows on television networks including ESPN2, Fox Sports, MTV, MTV2, Showtime, HBO, and in video games for companies such as EA Sports. David’s songs are also featured in music compilations for companies such as Sony, Lonely Planet, Red Bull, and Craig’s List. Further adding to his success, David’s song “Shout it Out” was in regular rotation at Starbucks. David has a busy fall ahead with over one dozen shows planned, including the renowned Elements Festival in Lakewood, PA on Labor Day weekend and a performance with Govinda and Soohan at Meow Wolf in Santa Fe, NM in November.