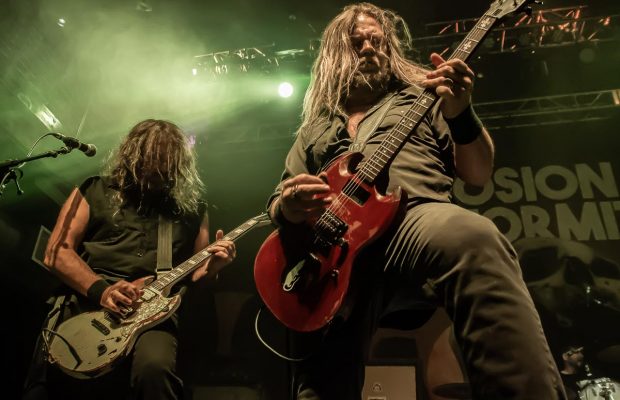 Heavy Metal band Corrosion of Conformity performed recently in Louisville, KY, having released their latest album No Cross No Crown earlier last year.  The band has been a part of the metal scene for 30+ years, with a brief hiatus a fews years back.  The venue this evening was packed with metal fans ready for a good time and they were not disappointed.  From the moment they came out onto the stage, the band was ready to rock with singer/guitarist Pepper Keenan addressing the crowd.  “How ya doin’?  It’s been a while!  It’s great to be here”.  Starting things off with “Seven Days”, the band performed a nice variety of songs that included “Shake Like You”, “Stonebreaker”, “Albatross” and “Diablo Blvd”.  The band interacted often with the crowd, with Keenan asking the audience to help him sing on various songs throughout the evening.    There were several moments during the set where Keenan and guitarist Woody Weatherman made eye contact with fans at the barricade and within the crowd as they sang along with the band, which added another element of fun and intimacy to the set.  Several songs into the set Keenan thanked the crowd for appreciating and supporting real music and that their support helps the band to keep doing what they love.  Telling the crowd that their next song was one they wrote a long time ago, they launched into “Vote With A Bullet”.  He later told the crowd, ” You’re coming on strong this evening and we appreciate it.  There a few shows left, but this was the best crowd so far”.  Ending their set with “Who’s Got The Fire”, the band left the stage briefly before coming back out for one more song, ending the show with “Clean My Wounds”.  They put on a fantastic, fun and energetic set for their fans!  Metal bands Lo-Pan, Quaker City Night Hawks and Crowbar opened the show.