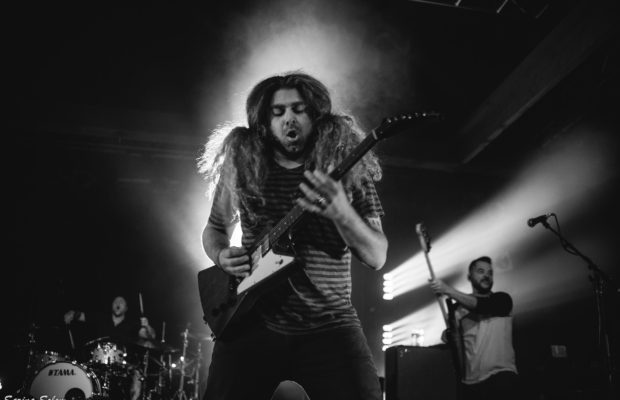 Coheed and Cambria, Saves The Day and Polyphia

Hundreds of music fans headed down to Seattle’s SODO district Tuesday night to see New York- based progressive rock band Coheed and Cambria play the Showbox Sodo with support from Saves The Day and Polyphia.

First to perform was Polyphia, an instrumental progressive metal band from Dallas, Texas. The bar was more crowded than the floor until a few minutes into their first song when people in the bar started to wonder why nobody was singing, then became impressed with the fact that they were seeing an instrumental band perform.

In between songs, Clay Gober (bass guitarist) would interact with the crowd, getting them to jump and clap along to each of their songs. They played a short set of only six songs, but didn’t forget to play older songs such as “James Franco” off of their 2014 album, Muse. Their set also included a few songs off of their 2016 album, Renaissance, including “Crush” and “Euphoria”.

New Jersey emo band Saves The Day was next to perform. The floor became crowded with people, but seemed pretty mellow for almost their entire set. When they played their hit song “Anywhere With You” off of In Reverie and “At Your Funeral” from 2001’s Stay What You Are, fans who knew who they were became enthused and the mood in the room completely changed.

Then, it was time for Coheed and Cambria. The last time the band played a show here was less than a year ago and somehow the band still managed to almost sell out Showbox Sodo. As the lights dimmed down, the crowd began to chant “Coheed” until frontman Claudio Sanchez walked on stage with his crazy hair and acoustic guitar and began to play “Ghost” off of their 2015 album, The Color Before The Sun. The set quickly picked up as they began playing “In Keeping Secrets of Silent Earth”, the title track of their 2003 album, In Keeping Secrets of Silent Earth: 3.

The crowd was anything, but mellow during Coheed’s set, everyone was rocking out and singing along at the tops of their lungs during the entire sixteen song setlist consisting of both new and old songs. During “Here to Mars” a couple in the crowd got engaged which just goes to show how special this band is to so many people.

The band walked off stage after playing “Peace To The Mountain”, but came back for a three song encore. The encore consisted of a cover of Nirvana’s “Drain You” which was special for Seattle fans being as Nirvana was a Seattle-based band. They ended the set with with their hit song, “Welcome Home” which is a song Sanchez plays with a double necked guitar, a talent that amazed fans who had never seen them live before. The night ended with many fans crowd surfing through the audience right up to the stage as Coheed and Cambria struck the last notes to “Welcome Home” and disappeared offstage.

Review and photos by Sarina Solem