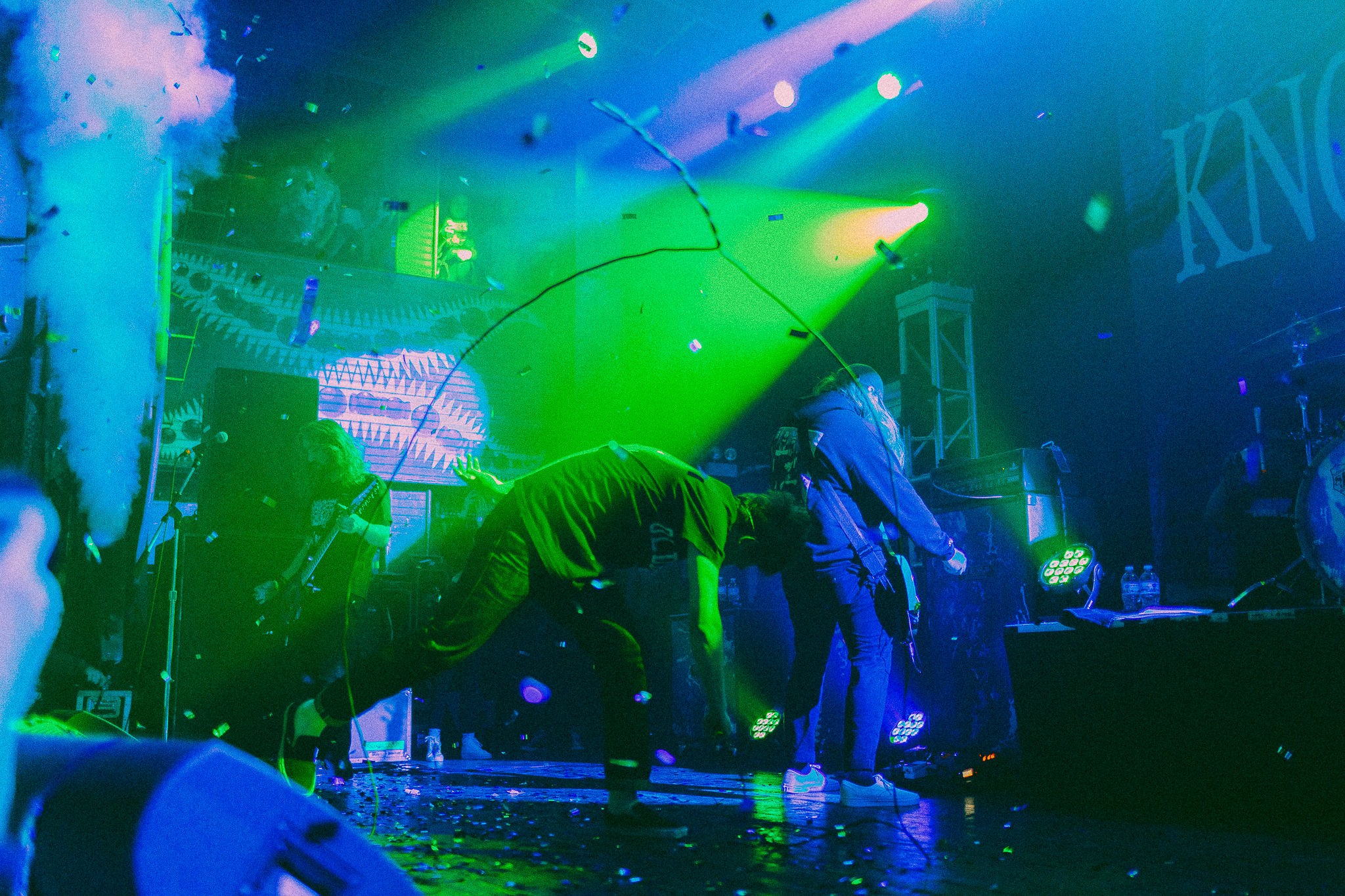 When Knocked Loose released their sophomore full length, A Different Shade of Blue, it seemed like the whole world was watching. After seeing the incredible success they reached with their debut full length, Laugh Tracks, and the amount of growth during that album cycle, Knocked Loose’s fans and critics alike were itching to see what would come from their new album. Featuring singles like “Mistakes Like Fractures,” and “…And Still I Wander South” along with harder hitters like “Guided By The Moon” and “In The Walls,” A Different Shade of Blue has become a strong contender for album of the year in our book. Therefore, some high expectations were set for the last show of the ADSOB Tour… and they were all met ten times over.

Opening the performance was metalcore band SeeYouSpaceCowboy, performing a mixture of their older songs off of Songs For the Firing Squad, and newer ones from The Correlation Between Entrance and Exit Wounds. Starting the night off early, they definitely managed to get the room moving. Vocalist Connie Sgarbossa was all over the stage for their set, moving like lightning and not holding back whatsoever, and it showed.

Following their set was Candy, a chaotic hardcore band that though just recently signing to Relapse Records has already made a name for themselves in hardcore, and could definitely pull a crowd. Between their dim lights and distortion, Candy put the audience in an ethereal trance.

Keeping the night moving were Los Angeles hardcore bands Rotting Out and Stick To Your Guns, both of which have been around the block more than just once. With Rotting Out playing songs ranging from their 2011 release Street Prowl to today, and Stick To Your Guns pulling out hard hitters like “This Is More,” old fans and new ones alike were both swinging hard for the entirety of both bands’ sets.

Finally, with the crowd’s adrenaline flowing, and the night near its end, it was time for the band that was the reason for the tour to begin with – Knocked Loose. After vocalist Bryan Garris tweeting that Chicago’s date would be a night to remember, everyone was anxiously awaiting whatever surprises were in store. The room was filled with the buzz of the crowd, and the sweet melodies of Kenny Chesney, Zac Brown Band, The Dixie Chicks, and Jason Aldean as the stage was being prepared, and then, a song many Knocked Loose fans recognized as a sign meaning it’s time… “Blue” by LeAnn Rimes cued up, the curtains pulled back, and then a flood of blue light overtook the stage. The band made their way out, and in the words of Garris, “Chicago [was] blue.”

Knocked Loose played a solid set comprised of songs from their Pop Culture days all the way to (almost) the entirety of A Different Shade of Blue. Starting with “Trapped in the Grasp of a Memory” and then moving straight into “All My Friends,” complete with canons firing off silver and blue confetti and smoke, they kicked off their set with a bang, and then kept it moving the rest of the night. Frankly, it’s pretty rare to see a show at House of Blues with that level of tangible energy for the entire night, but they pulled no punches and they made it happen. By the end of an eighteen song set, the crowd was still alive, still spinning the room like a carousel, and having a grand time. Never have I seen a band release blue and white balloons during the breakdown of their finale, but Knocked Loose sure did, and the crowd went wild for it.

It has been noted time and time again that Knocked Loose is a very young band that is climbing the charts in popularity and success more quickly than seems imaginable, and a lot of people seem to question why that is. After seeing the final night of the A Different Shade of Blue Tour, it has become quite clear. While most bands limit themselves to one sound, one style, etc, this band has never done that. Lyrically, they hit hard. Sonically, they hit hard. Aesthetically, they put in their all. But overall, the key aspect in Knocked Loose’s success, both recorded and live, is that they’re doing what they want, and making music that is fun. Not a lot of heavy bands will put on a show with balloons and streamers and confetti, but this one did, and the amount of enjoyment they had, the amount of enjoyment their fans had shows. This is a band not to miss. The places they’re going, both geographically and developmentally, are far and wide and worth watching.