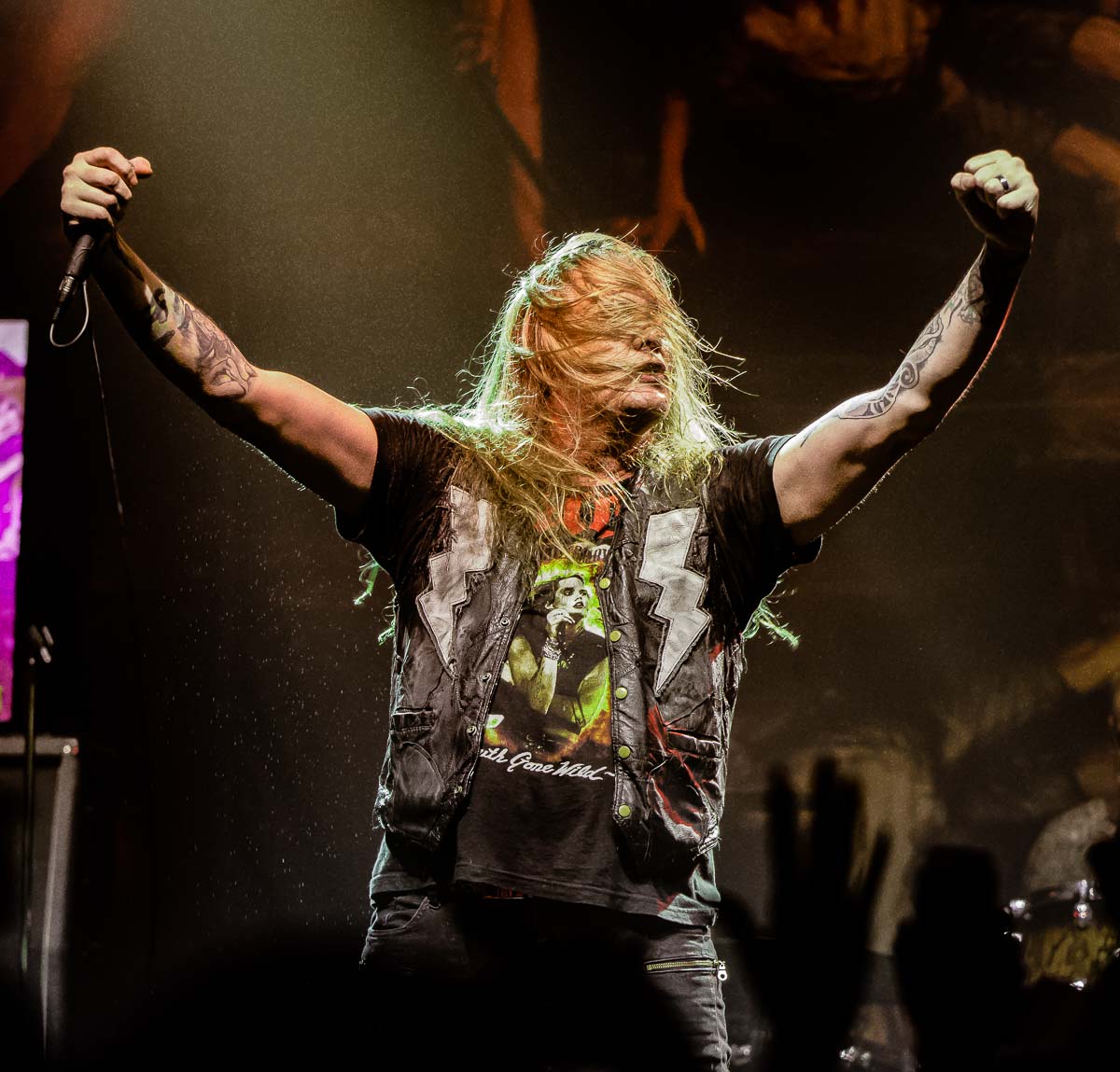 Nostalgia is a powerful emotion and I was feeling especially nostalgic this past Friday  night when Sebastian Bach brought his current tour to Louisville, KY.  The former frontman of iconic heavy metal band Skid Row, Bach’s current tour sees him performing Skid Row’s second album, Slave to the Grind, in it’s entirety for the album’s 30th anniversary, along with some other hits mixed into the set.  As one of my favorite metal bands in high school, I was pretty excited to hear my favorites this evening and he did not disappoint.  Although the crowd was pretty light as doors opened, as it got closer and closer to show time, more and more people filed in to create a pretty sizable crowd for the evening.  Starting things off was local hard rock band Edgar Red.  With a heavy, grungy sound, and Layne Staley-esque vocals, they were having lots of fun on stage and engaging with the crowd, who seemed to be enjoying the set.  With some local fans in the crowd singing along, I have no doubt they made some news fans this evening too!  They definitely got the crowd warmed up for the evening.  Next up was Detroit rock/pop/punk band Kaleido.  Singer Christina Chriss is a dynamic front woman.  She bounced around the stage in bursts of energy and chatted with the crowd between songs.  Guitarist Drew Johnston, with his leg kicks and twirling guitar, and bassist Cody Morales with his smiles and crowd engagement, added a fun energy to the set.  Towards the end of the set, everyone left the stage except drummer Joey Fava, who proceeded to do a short drum solo, with plenty of humor mixed in, such as when he would stand up, with his hand to his ear, prompting the crowd to cheer and applaud.  As everyone came back on stage, Chriss talked about how hard the pandemic had been on everyone and their mental health and performed a new song the band had written earlier this year called  “PANIC IN A PANDEMIC”.  They put on a really fun set and had the crowd ready for the evening ahead!

As the lights dimmed and Sebastian Bach and his bandmates came out on stage, the crowd cheered and screamed!  Almost immediately, he launched into the first song for the evening, “Slave To The Grind”.  Saying that he didn’t know back in 2020 if this would ever happen again and that he had dreamed of this night and touring again, he went on to say that we all helped to make it happen.  He thanked everyone for coming out this evening, telling us to give ourselves a round of applause.  Telling the crowd that he and his band would be playing all of the songs from Slave to the Grind this evening, he said with a laugh that included “Even the ones you don’t like!  That’s what entirety means!”, launching into “Quicksand Jesus”.  In addition to playing Slave to the Grind, he also performed several hits from Skid Row’s self-titled first album, including “18 and Life”, “Youth Gone Wild”, and “I Remember You”.  Head banging, jumping around the stage, and swinging his microphone around, Bach was full of energy and in high spirits.  He joked with the crowd at one point between songs, saying “You’ve gotta give me a second to recuperate.  I’m 53”.  He went on to say how people always ask him how he’s going to sing songs from his 20s when he’s in his 50’s.  “I say singing is not the hard part.  The hard part is seeing the next song on the set list!  I can’t see shit!”.  He joked about not putting on his pants with “1,400” zippers and boots that are hard to walk in during the pandemic shutdown, telling the crowd that when he starts to tell corny jokes it means he’s having a lot of fun and doesn’t want the night to end.

Along with singing songs this evening, Bach also told stories and jokes and reminisced on old times and old friends, several of which are no longer with us.  Throughout the set, there were video screens at the back of the stage that played old footage of interviews, tour footage, and scenes from Skid Row music videos, which added to the nostalgia of the evening.  Towards the end of the set, he dedicated the next to last song to the crowd.  “I want to dedicate this song to everyone who’s been rocking and rolling with us for 35 years!  Wanna get wild one more time?”, before singing “Youth Gone Wild!”.  He then started to walk off stage before coming right back out and asking “What’s going on?  We sang all the songs right?”, as the crowd started chanting “Get The Fuck Out”.  Pretending to be hurt by the crowd telling him to get the fuck out, he then said with a smile and a laugh “Oh!  You mean the song “Get The Fuck Out?”.  He then closed out the evening by singing the last remaining song from Slave to the Grind.  35 years of rock and roll and Sebastian Bach can still hit those high notes and rock out with the best of them!   It was an incredibly fun evening!