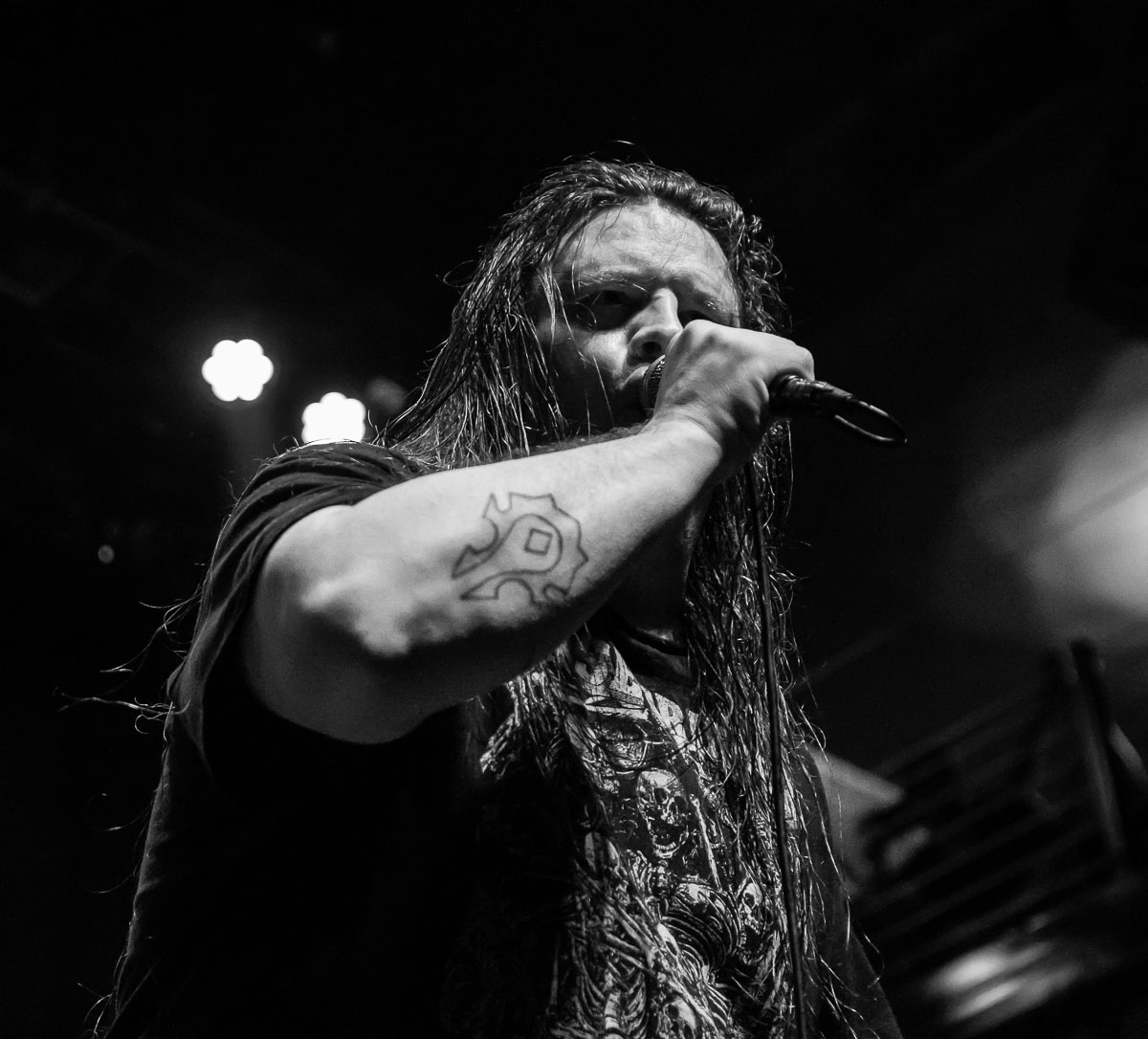 Cannibal Corpse with Whitechapel, Revocation, and Shadow of Intent

On March 22nd, Cannibal Corpse brought their current tour to Louisville, KY to a sold out crowd of metal fans!  Starting the night out was Connecticut deathcore band Shadow of Intent.  They had the crowd banging their heads from the first note, with singer Ben Duerr spending much of the set at the front of the stage singing directly to the crowd.  With their hands in the air, the crowd was definitely feeling the heavy sound of the band.  Having released their latest album Elegy in January of this year, the band played some newer songs along with some older tracks from their first three albums.  Their set was a great start to the evening!  Next up was Boston technical death metal band Revocation.  Pure energy and high spirits from the start, they had the crowd singing along in no time!  Having been around since 2000 (first as Cryptic Warning and now as Revocation), they played from an extensive catalog of songs this evening that had the crowd engaged!  Early in the set, singer/lead guitarist David Davidson told the crowd that it was their rhythm guitar player (who plays with them live) Noah’s birthday.  With the crowd being led in a “Happy Birthday” sing-along, Noah knelt down on stage and chugged a beer and then the whole band did a shot!  It was a fun moment in the set for sure that added some fun energy to the evening.  As the band finished their set, drummer Ash Pearson threw his drum sticks into the crowd and then Davidson acted as if he was gong to throw his guitar into the crowd before pulling it back, eliciting a few laughs.  Up next was Knoxville deathcore band Whitechapel.  With a small platform set at the front of the stage, singer Phil Bozeman spent much of the set singing from the platform.  Thanking the crowd for coming out, Bozeman then said that after all of the bullshit going on in the world over the past two years, it was great to see everyone’s faces here this evening.  He then said that the band was going to play some old stuff this evening and that his voice had been going out on him a bit so to please bear with him and help him sing!  Towards the end of their set they thanked Cannibal Corpse for putting on this tour and said that “Without bands like them, bands like us wouldn’t exist”.

Rounding out the evening was Tampa-based death metal band Cannibal Corpse.  The band that everyone was waiting for, the crowd went wild right from the start.  Starting things out with “The Time To Kill Is Now”, Corpsegrinder growled his vocals over the crowd who was singing along to every word.  Chatting quite a bit throughout the set, Corpsegrinder dedicated a song early on to all of the ladies-“Fucked With A Knife”.  Joking around throughout the set with the fans, he later dedicated a song to all of the headbangers, saying “I headbang enough for everyone in the venue so you don’t have to, but if you want to you can try to keep up but will fail miserably!”.  Afterwards he told a man in the crowd that he got an E for effort and an F for failure!  Playing songs that included “Gutted”, “Evisceration Plague”, “Necrogenic Resurrection”, and “Devoured By Vermon”, they kept the fans singing and banging their heads for the entirety of the set!  Towards the end of the set, Corpsegrinder started to say “Unfortunately…” as the crowd shouted “NOOOO!”, with him joking, “Why are you saying no?  What if I was going to say Unfortunately, we have 10 more songs”.  He then went on to say that they did, indeed, only have one more song and that “You know it will eventually come to an end.  It can’t last all night.  Before we go, we want to send a song out to all of you for coming out tonight.  Keep supporting death metal!  Are you ready?  For the amount of people here tonight, that reaction was pathetic.  You have one more chance not to disappoint me!”.  The band then ended the set with their hit track “Hammer Smashed Face”.  It was a fun and brutal evening of death metal that those in attendance will not soon forget!