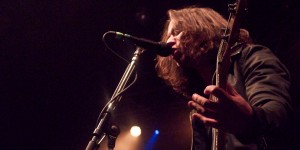 Hailing from Miami is the hard rock quartet Black Tide who are filled with young talent and lots of promise for the future. They have released their performance footage from the band’s appearance at Comic-Con 2011. Watch their live videos of “That Fire” and “Fight ‘Till The Bitter End” below. They are also currently on the Rockstar Energy Drink UPROAR Festival, and we will be catching up with the band for an interview in a couple days, so be on the look out for that!